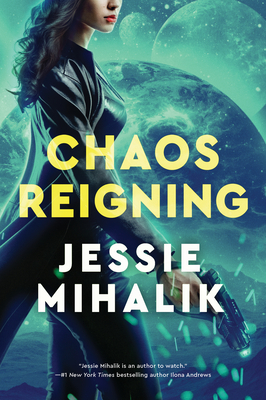 I loved Polaris Rising and Aurora Blazing so it was with great anticipation I requested Chaos Reigning for review. Unfortunately, the third and final book in the Consortium Rebellion series wasn’t as successful for me as the first two. What I can’t tell is how much of my reaction was due to Covid-19 reading malaise. I have been, for the most part, over the past 8 weeks, re-reading – and I’m not really a re-reader. However, I’ve been seeking comfort with familiar favourites and have had a bit of trouble concentrating on new things. It may be that had I read this book in a different time it would have worked better for me.

First off, a note to readers: the Consortium Rebellion series really needs to be read as a series. While the romantic relationships are all complete in each book, the overarching plot takes all three books to come to fruition. There aren’t what I’d call cliffhangers; each book has a neat ending but I don’t think a new reader coming in at Chaos Reigning would be able to pick up the world building and past plot easily.

Second note to readers: spoilers for the previous two books in the series follow. Be ye warned.

Lady Catarina von Hasenberg, the youngest sibling at 21, has been carefully cultivating a social mask for years; she’s the flighty one, the social butterfly who is mainly interested in fashion and parties. But there’s much more to her than meets the eye. It is revealed very early on that Albrecht von Hasenberg, dear old dad, was experimenting on her as a child, ostensibly to find a cure for a mysterious illness which kept her a “sickly child”. Cat has super strength and super night vision and fast healing, even more than the newest and best nanos being injected into her every year. Once teen Cat became aware she was being schooled to become the family assassin, she began to hide her abilities from her father until he believed his experiment had failed other than to cure whatever disease she had. Genetic experimentation is banned by the Consortium so Cat has kept what she is from everyone, even her beloved siblings.  Her father and most of the rest of her world believe her only use to their High House is to marry for political alliance. Unfortunately, Albrecht is strongly hinting that his chosen husband for Cat is an old creeper and Cat is not into it.

After the events of Aurora Blazing, House von Hasenberg is still trying to identify all the people involved in the plot to kidnap Ferdinand, the heir and to hold them responsible for what happened to him while he was held by the Syndicate.

Cat has been cultivating friendships with some young members of House James and has wangled herself an invitation to a two week long house party on Andromeda Prime where there will be a spectacular meteor shower most evenings. She knows House James had something to do with Ferdinand’s abduction and she hopes to find evidence at the party to reveal more information about the plot.

Bianca, concerned about Cat’s safety, has tasked Alexander Sterling and Aoife Delaney to accompany her to the party; Alex will pose as her boyfriend in order to stick close and Aoife will be Cat’s official bodyguard. Readers will remember Alex and Aoife from Aurora Blazing and the pivotal role they had in Ferdinand’s rescue. Cat is initially not very keen on taking either of them along with her and tries to skip out early to avoid them cramping her style but Bianca knows Cat too well. Alex is extremely hot and Cat is deeply attracted but initially what keeps them from acting on those shared feelings is the mutual thought that this is “just a job” and not real.

While the “space Regency” vibe is very strong with the concept of the house party and the formal dress and the sneaking around at night with low-tech lock picks, the story doesn’t stay long on Andromeda Prime. I don’t want to say too much more about the plot. I don’t want to give anything away about how it all gets resolved. Suffice to say that Cat is put in a position where things look very dire and she has to save the day largely on her own (with the help of her small team including Alex and Aoife). This has the effect of not only showing the world that Cat is a force to be reckoned with, but herself as well. She has long felt inferior to her siblings. Fortunately Alex is amazed by her skills and encourages her to see herself for the competent, awesome woman she is.

One of the things I loved about Polaris Rising was that the action started immediately. Aurora Blazing had a slower start but ramped up significantly and kept up the pace pretty much from there. Chaos Reigning, like its predecessor, also starts on Earth and I had a similar reaction to that; it was not the straight-into-action story of the first book and took a while to get going.  Unlike Aurora Blazing however, I found that Chaos Reigning took longer to get going and the action proceeded more in bursts, with longer periods of … not inactivity – there was stuff happening; but it wasn’t edge-of-your-seat stuff like in the other books, not until very near the end of the book.

Chaos Reigning has a different vibe to the other books in the series, with the focus being a lot more on politics than action-adventure. There is adventure; some daring escapes and near-disasters but overall I found it a quieter book with more behind the scenes activity.  The pacing was different too, a little choppy, and the ending felt rushed. There were a lot of things which had to be wrapped up and it felt like there wasn’t enough space in the book to give those things the exposition they deserved.

I also found the romantic relationship a little harder to access. Alex was more opaque than the other two heroes and the relationship developed over a shorter timespan. I did like Cat and Alex together but I wanted a little more. The leads don’t reveal their secrets to each other until very close to the end of the story and that stalled the emotional intimacy of the relationship.

I did relate to Cat, possibly better than I had Ada or Bianca. While I don’t have five siblings, this felt very familiar to me:

I was a soother. It was in my nature to smooth things over, to quietly apologize even if it wasn’t my fault. I’d spent a lot of time as the peacekeeper for my five siblings. As the youngest of six, I’d learned negotiation and manipulation early, but I was trying to do better at setting boundaries and standing my ground.

Watching Cat come into her own was very satisfying.

Cat believed she was less than her siblings, notwithstanding her super soldier skills and I liked very much that Alex saw her for who she was and approved of and applauded what he saw.

Aoife was such a strong character. I loved her too. When she was on page she shone so bright she tended to take the spotlight off the leads so that may be something of a mixed blessing.

My favourite parts of the book were when the action was at its highest and the stakes were life or death. I liked the way Alex didn’t push his way to the front; Cat was always in charge. He complemented her and never took over. They worked together really well and, Alex being who he is, was able to show her a thing or two about her talents which had been kept from her (mostly by her hiding her abilities it must be said, but still).

I remember my dislike for Richard Rockhurst from the first book and I hoped for a little more about him (and perhaps him being hit by the karma bus) but he didn’t feature strongly in the book. I am all over reading more about Ferdinand and Evelyn if there’s any chance of a novella or short story for them.

My reading of Chaos Reigning was in fits and starts and perhaps my feeling that the story was a bit like that was more about me than it. Certainly I think my need for the comfort of old familiar reads had an impact on my enjoyment. I liked the book it but it didn’t take me out of my head as much as the previous two books did. That’s likely a bigger task than the other books had to do but I nevertheless feel the series didn’t end quite as strongly as it began.