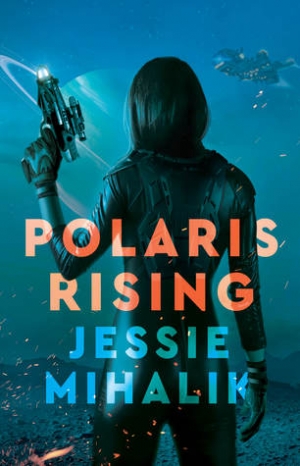 A space princess on the run and a notorious outlaw soldier become unlikely allies in this imaginative, sexy space opera adventure—the first in an exciting science fiction trilogy.

In the far distant future, the universe is officially ruled by the Royal Consortium, but the High Councillors, the heads of the three High Houses, wield the true power. As the fifth of six children, Ada von Hasenberg has no authority; her only value to her High House is as a pawn in a political marriage. When her father arranges for her to wed a noble from House Rockhurst, a man she neither wants nor loves, Ada seizes control of her own destiny. The spirited princess flees before the betrothal ceremony and disappears among the stars.

Ada eluded her father’s forces for two years, but now her luck has run out. To ensure she cannot escape again, the fiery princess is thrown into a prison cell with Marcus Loch. Known as the Devil of Fornax Zero, Loch is rumored to have killed his entire chain of command during the Fornax Rebellion, and the Consortium wants his head.

When the ship returning them to Earth is attacked by a battle cruiser from rival House Rockhurst, Ada realizes that if her jilted fiancé captures her, she’ll become a political prisoner and a liability to her House. Her only hope is to strike a deal with the dangerous fugitive: a fortune if he helps her escape.

But when you make a deal with an irresistibly attractive Devil, you may lose more than you bargained for . . .

I was so excited to read Polaris Rising after reading that blurb. Sci-fi romance is my new favourite thing to read.

The novel starts with immediate action as Lady Ada von Hasenberg is captured by mercenaries, the result of a steep bounty her father put on her capture and return to Earth. Ada puts up a spirited defense but is outnumbered. Undaunted, Ada almost immediately begins to plot her escape from the spaceship Mayport. (Fun fact: it took me a while to cotton on that Mayport was the name of the ship and not the name of a navigator or the ship’s computer. For a while I thought Mayport was like Zen from Blake’s Seven.)

She is put in a cell with another prisoner – Marcus Loch. Loch is a big muscular man, with a rugged attractiveness Ada is immediately drawn to. However, she also knows he’s very dangerous. His bounty is even higher than hers and it’s for a much darker reason – he’s rumoured to have been responsible for killing his entire squad and his commanding officers during the Fornax Rebellion. Everyone wants a piece of Loch and Ada has to decide whether it’s worth trusting him (just enough) to help her escape or whether she needs to go it alone. They warily dance around each other for a little while but decision time looms even faster than expected when Ada’s erstwhile not-quite-betrothed, Richard Rockhurst, arrives in a space cruiser demanding her return.

Ada initially strikes a simple financial bargain with Loch; in return to a crapton of money he will help her escape. She’s not entirely sure he’s trustworthy but it’s worth a go. Plus, because she’s extremely clever, she has contingency plans in case he tries to double-cross her.

There follows a daring escape from the Mayport and Richard Rockhurst. But they’re not out of the woods yet. Because, as he says, Loch has not completed his end of the bargain he sticks around and there are more narrow escapes and daring plans as they are pursued across the galaxy.

Ada is a fascinating character. She is the fifth of six children and as such, has little actual power in her High House. However, as a von Hasenberg daughter she does have power and she’s been raised from birth to use it. Politics, weaponry, technical know-how all formed part of her education. She has used those skills and honed them to a fine degree since she ran away from a marriage she did not want.  I was delighted to find that she has plenty of opportunity to be front and centre with the rescuing and daring plans and schemes. Yes, Loch does his share too (of course, there is a story about Fornax Zero and the truth, when it is eventually revealed is very different to the public version – suffice it to say that Loch is a good guy – albeit of the cocky alpha variety) but Ada is no damsel in distress. Both Loch and Ada have their own distinct skillsets and each acquiesces to the other’s expertise at appropriate times.

Sometimes, their narrow escapes felt a little deus ex machine but for the most part, it was just a wild ride, with Ada and Loch staying just ahead of disaster or pulling success out of the mouth of failure.

Over the course of the story, Ada and Loch’s simmering attraction builds and as they build trust by proving their trustworthiness, more than just lust develops between them.

The story is all told from Ada’s point of view but I still felt I had a good handle on Loch. He’s necessarily not as deeply drawn as Ada but he’s a kind of archetype I recognised and there was enough in the book for me to buy in to their romance. Yes, it’s pretty fast but in the pressure cooker environment they were in I had no trouble believing the truth of their feelings.  Loch and Ada clash from time to time; both wary of risking their hearts but they do work things out (this is a romance after all) and both Ada and Loch know how to apologise without making excuses. Once they decide to commit, they also commit to more open communication with each other, even when it’s hard. Sometimes this didn’t feel entirely authentic (perhaps there wasn’t quite enough groundwork or the switch was a little too abrupt?) but I nevertheless appreciated that they actually talked to one another about the difficult stuff. It gave me confidence for their future.

In the course of their escape from Rockhurst, Ada and Loch pick up some extras and there is a wonderful found family element to the book as well. I especially enjoyed the characters of Rhys and Veronica – I wonder if they will get a story (or a novella?).

The weight of responsibility settled around me. Now I had two people counting on me. And while I was sure both of them would be fine without me, I always felt responsible for those in my care. According to my father, it made me a terrible von Hasenberg.

Despite the estrangement from her family, Ada remains loyal to House von Hasenberg and when she discovers something which puts her family at risk, she takes steps to even the playing field. Ada’s father, Albrecht, is a piece of work but the von Hasenberg siblings are all close and loyal to one another. House and Consortium politics is complicated and Machiavellian but the siblings learned early to stick together. Ada is closest to her next-oldest sister, Bianca, and those relationships play a larger part in the tale as the story draws to its close. The secondary characters each had a strong sense of having their own story outside the book; they weren’t there just to further Ada and Loch’s journey.

The first three quarters of the book are mostly daring escapes, heists and adventures with very brief interludes of respite. The last section dragged a little as it was quieter and more political. It also jumped around a bit. There were a few places where I thought the book could end well enough but then I didn’t understand that Ada and Loch will not be the protagonists of the next book in the trilogy. While I understood in the end why the story kept going until the point it did, the high-octane adventure did tail off for a while there and the novel lost momentum just when I felt it should have been ramping up further.

The very end however, was exciting and foreshadowed some of what will no doubt be a major part of the next book.

I enjoyed Amanda Bouchet’s Nightchaser a little better than Polaris Rising but both books would make a fabulous movie/tv show. The characters here were all charmingly roguish (I include Ada, Veronica and Bianca in this), likeable and terrifyingly clever, with plenty of undiminished girl-power for female readers to cheer. The worldbuilding was solid and delivered without boring info-dumps. There’s a kind of Regency/Royal Court vibe to the politics which historical romance readers will recognise which helps too. Some of the tech went a little over my head but it felt internally consistent and I don’t need to understand every little thing to get the gist and enjoy it.

I am eagerly awaiting book two in the series.

→ Kaetrin
Previous article: REVIEW: Masquerade with Music (Warrender Saga Book 12) by Mary Burchell
Next Post: REVIEW: The Sky Above Us by Sarah Sundin