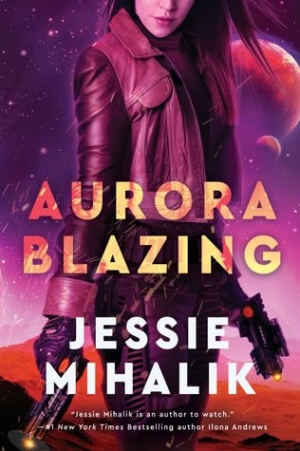 Content Advisory: There are some scenes of slavery and torture in the book so readers please note.

I loved your previous book, Polaris Rising, which came out earlier this year and was the first in your Consortium Rebellion trilogy. While that book was mainly about Ada and Loch, there was definitely something going on with Lady Bianca von Hasenberg and Director Ian Bishop, the security chief for House von Hasenberg and I could hardly wait to find out what their story would be.

Bianca is the next oldest von Hasenberg sibling to Ada, with Ferdinand being the eldest (and therefore the heir), then Hannah and Benedict (Bianca’s twin) and Catarina being the youngest. The siblings all work closely together to try and thwart their father, Albrecht’s tyranny but also to maintain the strength and honor of their House. Bianca is a widow, her husband having died under mysterious circumstances. She never talks about it but the rumours fly that she killed Gregory. Bianca neither confirms nor denies.

Bianca is the information guru for House von Hasenberg. She has her own spy network and an uncanny way of hacking encrypted data.

Ian Bishop is very young to be Director of Security for a House but he’s good at what he does. When he first joined the family he was bodyguard to Bianca. Bianca had a crush and tried to flirt with Ian but he shut her down as being an “empty-headed princess”. Stung, Bianca backed off. Then she was married off to Gregory. Her marriage was abusive and unhappy. What Gregory did to her caused her to be forever changed and she is still physically recovering her strength. On her return to Serenity, Ian was in charge of security and, to hide her continued attraction to him she’d pick a fight with him to get him angry and off balance. They’ve been constantly bickering and baiting one another ever since. And we all know what that means.

Bianca was surgically and biologically changed by Gregory’s experimentation on her. She can intercept and decrypt wireless messages in her brain. The information overload is painful for her and she has other physical limitations as a result of these changes. She can barely eat because she gets blinding headaches and nausea when she is overwhelmed – and overwhelmed is almost a daily state of being for Bianca. She’s trying hard to work her way to health and to manage her abilities (there’s no getting rid of them) but she’s still in the early stages of that. Nobody knows about the modifications to her brain and to her nanobots. She hasn’t even told her closest siblings. Her father would only exploit her if he knew and she doesn’t trust many people after being so poorly treated by her husband.

Because of her experiences with Gregory, Bianca also assists young women escape from unwanted marriages and/or abusive relationships. While she doesn’t require payment, most of these rescuees join her information network.

The story is told completely from Bianca’s first person point of view so Ian takes a lot longer to get to know and even then, he is not as fully fleshed out a character. He is drawn more broadly than Bianca. Ian is a carer-protector alpha and his “prime directive” is to keep Bianca (and House von Hasenberg – not necessarily in that order) safe. Bianca chafes at the restrictions Ian would like to put on her and this causes most of the conflict between them. And all this time her attraction grows, even though she doesn’t want it to.

The thought of Ian carrying me to my bedroom was not as repugnant as he probably meant it to be. In fact, in the right circumstances, it would be delicious. I banished that thought before it had time to grow roots and make itself at home.

“This is only the second time I’ve had real chocolate,” she said with a delighted sigh. “It’s better than sex.”

I hummed my agreement. It was better than bad sex, definitely. Good sex . . . well, I hadn’t had any of that in a long, long time, so chocolate had the edge, if only thanks to recent history. My mind flashed to Ian. I bet he’d beat chocolate. Too bad I’d never know.

When Ferdinand is abducted, both Ian and Bianca try to find him. Ian wants Bianca to stay out of it. Bianca however knows she is uniquely placed to assist in the investigation and ignored Ian’s demands to leave it alone and/or feed information to him to act upon. Eventually, because reasons, Bianca is forced to leave Serenity in order to continue her investigations and her father places a bounty on her for her safe return – which means every mercenary and his dog is after her, as well as Ian Bishop.

I don’t think it is a spoiler to say that later on, Ian and Bianca ultimately begin to work together – at first with mistrust and suspicion and later as full partners – because this is a romance novel and how else are they going to spend enough time together to get together? As they race to try to find Ferdinand before he is lost to them forever, they come face to face with their feelings for one another. And, as they rely on the other’s expertise to execute increasingly risky and daring plans to achieve their aim, they realise their a perfect pair.

I said in my review of the first book that the story slowed down a little by the end when the setting was Serenity, only city on Earth and Consortium stronghold, and the action moved more to the political sphere. Mostly the rest of the book had been action and adventure with a healthy dollop of romance. In Aurora Blazing the same holds true but the slow part, while still in Serenity, is right at the start instead of at the end. However, once Bianca leaves Earth the pace picks up and things get really interesting and action-packed when Ian and Bianca join forces. It’s worth hanging in for that first five or six chapters because the payoff is just that good.

The first section is a little info-dumpy and a bit too much “I did this. I did that. I went here. I went there. Then I…” because most of what was happening was just Bianca. There were some concepts and technology which was explained in detail and others which were a bit more hand-wavey but I got the gist sufficiently even though I had a question here or there. Also, I could have done without the repeated mention of Bianca sinking into her “public persona”. It was a significantly overused phrase in the book. However, once Bianca gets out of her head and starts to take more decisive action, those things settled and I was able to relax more into the story. It wasn’t bad, but it wasn’t the compelling introduction that Polaris Rising had either.

Those things are more than made up for by the latter 23 or so chapters. I don’t want to give away spoilers but I will say that the final set piece was brilliant, very edge-of-your-seat, high stakes, how-are-they-going-to-get-out-of-this-one? and super tense. I liked that Bianca was very much the heroine – Ian had things to do and was definitely necessary to their success as well but Bianca really shone.

The romance takes a little longer to blossom in Aurora Blazing than it did in Polaris Rising and that made sense because for most of the book, when Ian and Bianca were together they were under significant time pressure to find Ferdinand. When there was any down time they were exhausted and trying to catch some much-needed rest (which was almost always interrupted but another drama). It would not have made sense for Ian and Bianca to take time out for sexy times when Ferdinand’s life was at stake. That said, the romance is very satisfying when it comes and I was very confident in their HEA – apart from anything else, you cleverly interwove small moments of intimacy and connection throughout the story so even when there wasn’t overt flirtation or courtship it was clear that the relationship was building and where it was going.

I’m really hoping that you write a novella about Ian and Bianca’s adventure on Pluto because I haven’t had nearly enough of this couple yet. I’m also very curious about Catarina’s story to come and I can’t wait to see where the trilogy ends up.

I think Polaris Rising is a slightly tighter book but the difference level in my enjoyment overall was minuscule so I’m going with the same grade for Aurora Blazing as well: B+.