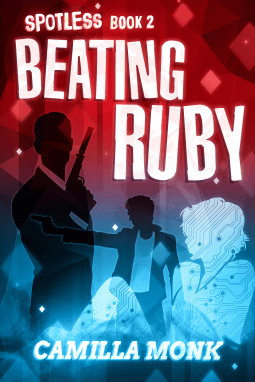 Life hasn’t been quite the same for computer engineer Island Chaptal since March, an OCD-ridden professional killer, burst into her life to clean her bedroom and take her on a global chase for a legendary diamond. Sadly, the (hit) man doesn’t just break bones; he breaks hearts, too.

Since then, Island has found solace in Alex—the perfect boyfriend—and Ruby, a software project about to revolutionize online banking security…for the worse. When Island’s boss is found dead after allegedly using Ruby to steal a vast fortune, it’s up to her to clear his name and recover the money. Someone else wants answers, though, and this time, Island might be in over her head.

From New York to Zürich, it’s going to take the return of a cleaning expert, a mini-octopus, and Island’s wits to beat Ruby. All while deciding whether to trust a man who already jilted her, or one who may have his own deadly secrets…

Well after the bang up start to this series last year with “Spotless,” I’ve been eagerly waiting for the follow up. What would Island be doing after the life altering events she raced through and where would March wash up? There’s a ton of unfinished business between the two of them as well as with Island’s family and the crime syndicate for whom March once worked and for whom he still has obligations.

The fun starts before the book even kicks off. Read the chapter headings and see. Then start in on the book and catch the horribly fantastic spoofy excerpts of lines from “romance books.”

The initial brief synopsis of first book (We spent five days racing from Paris to Tokyo in search of a two-billion-dollar diamond . . . and I got abandoned in a hotel room with my underwear still intact and my heart broken in a zillion pieces.) here reminds me of the highlights of book one while the little nuggets of backstory sprinkled along the way in the early chapters finish catching me back up.

But … but … I guess I expected March to make an earlier appearance. Instead, Island’s job and new boyfriend are explained and we watch her attempt to discover the truth behind both only to learn how they intersect. Yep, it’s a love triangle spoof. Island’s comparison of Alex’s and March’s chest hair patterns is hilarious. Frankly, after the events of “Spotless” I was surprised that she seems as clueless as she does about it all. Did she learn nothing from the events of that book?

While the book might kick off with a “suicide” which is questionable at best, as soon as March arrives on the scene it’s car chases though Times Square in NYC complete with dancing M&Ms cavorting on the sidewalks waving checkered racing flags quickly followed up with death defying cable car antics (like the movie “Night Train to Munich”) ..and a baby octopus.

The middle section of the book seems to focus more on the romance triangle than on the suspense plot. After Island learns what she does about her boyfriend Alex, I wondered how she could even consider continuing a relationship with him. Then Island stops and considers something that is revealed earlier in the story which makes me stop and really think about it as well. It’s actually a rather amazing bombshell once it’s put together with what we know about March both from the first book and from what we see again about him in this one. Oh yeah, he’s fallen hard for her and Island is heartened to realize he hasn’t totally given up even if he still thinks he’s not worthy.

Island starts the book with a bit of agency – when her boss dies and her job goes pear shaped, she doesn’t just sit there and do nothing to try and get the truth. But she also gains more as she goes along. She’s got not one but two alpha males trying to protect her but also use her for various reasons – including pissing contests – yet she’s the one who cooks up a strategy to solve the mystery and begins to see it through. Part of me is happy that she hasn’t reached the point where the violence is ho-hum to her or that she has hardened herself to ignore even an enemy in desperate peril. The cause of that peril had me racing over to research their defense mechanisms and diet. Well … I’ll be damned. Here I thought they were relatively harmless looking aquatic mammals.

The story ends with some justice done, some things accepted and allowed for The Greater Good – or maybe because that was the way to keep Armageddon from starting. There’s a new player along with the other people from Island’s complicated past but finally! the situation with March moves forward even if only an incremental bit. The pace is perhaps a teensy bit less rushed than in “Spotless.” The secondary characters not quite as colorful and the language lessons are German rather then French. What is to come for all these people? Well, only you know but I’m eagerly waiting. B-