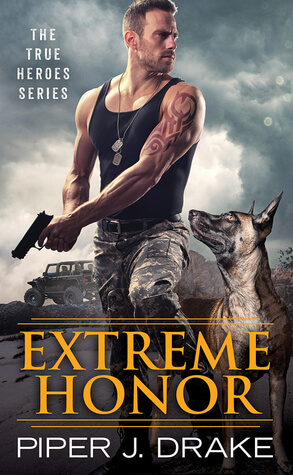 I’ll be honest, I clicked on this book at NetGalley entirely because of the dog. Sure there was a hot man on the cover but *dog*!! I love the idea of series set around service dogs, even if I’d had mixed success with the ones I’ve tried so far.

(Note for readers: This is not Old Yeller. Atlas is still around at the end of the book.)

As for Extreme Honor, well I wanted to like it more than I did. But before get to why, I should say a little about the story:

Atlas is a Belgian Malinois who has worked for the Air Force as a service dog. He is super clever and does things such as jump out of planes and rappel down cliff faces. (I’d have loved to have found out more about this – it’s just so cool.)  He can track and he can kill; unlike a guard dog, he has not been trained to injure – he will take out a human if he’s instructed to do so.  David Cruz trained Atlas back in the day and then handed him off to his friend Calhoun.  Atlas and Calhoun had a close bond, as the best K-9/human pairings do and when Calhoun was killed in a “friendly fire” incident in the middle east, Atlas was bereft.

Cruz and his buddies, Rojas and Forte, (all former Air Force), run the Hope’s Crossing Kennels, where they train service dogs. Cruz is trying to rehabilitate Atlas, who is grieving the loss of his handler so deeply he will not eat unless ordered to do so and Cruz watches him while he does it.  Cruz knows there is something hinky about the way Calhoun died and  a mysterious text from his friend just before he was killed makes Cruz certain the answer lies with Atlas.

Evelyn (Lyn) Jones is a civilian dog trainer with a relative high up in the military. She pulls some strings and is assigned to help Cruz with Atlas’s rehabilitation and training. At first, the sparks fly between them (she is pretty aggressive when they first meet and this, understandably, rubs Cruz the wrong way) but both put Atlas’s needs first and soon they are working well together and acknowledging their underlying attraction.

As Cruz looks further into the death of his friend, Lyn is targeted by people who clearly think she knows more than she does and the two things converge with Atlas. Cruz is determined to get justice for his friend but he also wants to protect Lyn and this does cause some romantic tension late in the book – he wants her out and safe and she wants to be included in what is happening.

There were things I liked, apart from Atlas (alas there was no Atlas POV which would have been awesome). I liked that both Lyn and Cruz wanted what was best for the dog and put their own pride aside in order to achieve their goals. I liked that Cruz was not a super-Alpha who required everything to be done his way. He did let out his dominant tendencies when he wanted to protect Lyn but he did listen when Lyn made her case and he trusted Lyn to know her own mind.

I also liked that you kept me guessing a bit with just who the villain was and I liked that not every “good” character was likeable or charming.  However, I felt a bit let down when not all of the pieces were laid out for me at the end – I don’t know if this thread will be picked up in future books? The excerpt from the next one in the series, featuring Rojas, didn’t give anything away in that regard.  Also, I had some questions about what would happen to Atlas going forward.

I’m not sure I will read the next book. There are some writing styles which just push me out of a story despite my best efforts. Even though I had an early copy and I expected a few typos which will have no doubt been corrected prior to publication, the thing which bothered me the most was so pervasive throughout Extreme Honor that I think it’s fair to say this is your writing style. So many sentences in the book started in a way that grated like fingernails down a blackboard to me. There was a lack of pronouns and articles in the narrative which rankled. In dialogue, I can cope because that’s often how people talk. But I dislike it in the narrative text of a story. I do realise that I may well be alone in this reaction so here are some examples for readers so they’ll know what I mean and whether or not it will bother them.

“We’re both focused on Atlas as a priority.” Might be the truth, but also another dodge.

Had to be who he’d heard her talking to if the man was at the forefront of her mind.

No way did they want to support a breeder who didn’t care about where their dogs went. Said a lot about those sorts of establishments and none of it good.

There were times when I was confused who was the subject of the sentence – at one point I spent a half a page puzzling why Cruz was on his belly until I realised you were referring to the dog. The opening page was a little confusing too. I had to read it two or three times before I really understood what was going on and who was who.

All in all then, Extreme Honor was a bit of a mixed bag for me.  I’d describe it as “okay” which may be damning with faint praise but it is what it is. I did like the dog.