REVIEW: Awakened And Other Enchanted Tales by Pamela Sherwood

JanineB- ReviewsFantasy / short storiesComments Off on REVIEW: Awakened And Other Enchanted Tales by Pamela Sherwood

Back in 2013, during a reading slump, I put down your historical romance A Song at Twilight. Even though I didn’t stick with the book, I couldn’t forget your way with words, and the experience left me determined to read your next work. 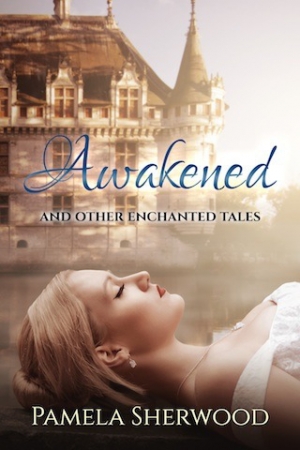 As it turns out, your next work was not a novel, nor a historical romance, but this 134 page collection of short fantasy tales. I recently stumbled on it after perusing your website, and although at $2.99 the price struck me as a bit high, I purchased it. Here is a rundown of all seven stories.

Awakened, the short story that opens the collection, is comprised of a prologue, five parts and an epilogue, each of which begins with a different quote from a fairy tale featuring a sleeping princess.

The story itself is, of course, a riff on Sleeping Beauty, but it begins after the prince has awakened our protagonist. The newly awakened Rosemonde is being fitted for her wedding gown when she realizes that although she is a hundred and sixteen years old, she has only sixteen years’ experience of the world.

When Rosemonde was last awake, the Terror reigning in Paris led her and her parents to escape to the forests of Normandy. Just before her sixteenth birthday, they heard of Napoleon’s rise to power, and then, of course, the sleeping spell fell over them. Now Rosemonde finds herself in the twentieth century, a time she knows nothing of.

Rosemonde’s betrothed, Charles, would like nothing more than to protect and cherish her. But when Charles’ cousin Gertrude arrives in a motorcar, accompanied by her friends Daisy and Violet, Rosemonde gets her first glimpse of what life can be like for a young woman in this new age. What kind of future will Rosemond choose?

I enjoyed Awakened’s twist on Sleeping Beauty. If I have one nitpick, it’s that the prologue felt a touch long and foreshadowed more than I wanted to know in advance. But while I was able to anticipate where the story was going, I still enjoyed the way it got there.

For all her innocence, Rosemonde and her conflict are intersting, and so are most of the other characters in the story, especially the women. It took me a little while to get used to the epigraphs at the beginning of each short chapter, but I came to appreciate them, too. I give this story a B-.

Death and the Harper’s Daughter

“I know who you are,” said Kylvan. “There’s no place for you here.”

Kylvan’s father is ill. Years ago, Kylvan learned the story of how her father, a harper named Kennon Corrie, used music to keep up the spirits of a city under siege. His harp kept Death at bay, but what her father did not tell Kylvan is that he struck a bargain with Death and agreed to a rematch at any time of Death’s choosing. Now Kylvan’s father is on the mend, yet Death has come to collect, and Kennon Corrie isn’t yet well enough to play.

To stave off her father’s death, Kylvan, a young woman dressed in men’s clothes, offers Death a potentially more profitable bargain. She’ll fulfill the promise for her father, but if she loses the match, her own life, as well as her father’s, is forfeit. Death agrees.

This is a lovely short fairy tale about mortality, and as such I found it very moving. It reminded me a bit of Martine Leavitt’s Keturah and Lord Death, but was more unpredictable. Along the way we learn more about Kylvan’s relationship with her father, but ultimately, the beauty of the story is in the universal truths it expresses. B+.

Harp Of Bone also features Kylvan. This time, she has been called to the royal court by Queen Rosalys the day after the wedding of Princess Annet to her suitor Lord William. During the wedding, a harper appeared with an enchanted harp made of bone. The harper claimed to have found the body of the missing Princess Ellen, younger sister to Annet, and built the harp from her bones, using her hair for strings.

The harp can play by itself, accompanied by a disembodied voice, which sings an accusation that Princess Annet murdered Princess Ellen over Lord William. But unlike the King, Queen Rosalys does not believe the accusation, and she asks Kylvan to investigate the murder in the hope of exonerating Princess Annet.

There is less development of Kylvan’s character in this story than there was in Death and the Harper’s Daughter, but we still got to see some new aspects of her. The plot focuses on the mystery, the royal family, and the harp. The story is well-written and engaging. The only other complaint I have is that I wasn’t sure if Kylvan’s companion was a character who appeared in Death and the Harper’s Daughter, or not. By this point, I’m eager to read a full-length book about Kylvan, so Harp Of Bone gets a B-.

Set in a world inspired by Renaissance Italy, this story has a darker feel than some others. That’s because its main character, Monna Mirabella Collona, “known to a select few as the Lamia,” is a villain.

A Woman’s Weapon begins when Mirabella approaches Fosca di Marino to procure the magic to sway a devoted husband’s affections away from his wife and toward herself, while at the same time rendering the wife helpless to do anything about it.

Mirabella is married as well, but her older husband rusticates in the country while she carries on affairs with younger men. She has poisoned many a rival in the past, but with her attention now fixed on Don Alessandro Marchetta, she needs the magic to get him to desire her instead of his wife.

Fosca agrees to sell Mirabella the cincture of Venus, which, once worn, will draw any man to her. She also has the perfect plan to get Donna Chiara, Don Alessandro’s wife, out of the way. At first the two women’s plan seems to unfold perfectly, but even a perfect plan can go awry…

I liked this story’s “whiff of evil” feel. We watch as Mirabella all but rubs her hands together in glee and wonder whether she’ll triumph over true love or whether justice will win out over her scheme. My complaints are that not much was gotten out of Mirabella’s Lamia identity; there was nothing about devouring children in this story. Also, I would have liked for the story to challenge the notion that poison is a woman’s weapon, but it didn’t.

Nonetheless I really liked the twist of having a female villain as the main character, and for such a short story, A Woman’s Weapon manages to convey a great deal and made me want to read more in this setting. The story was smoothly written and executed well. B.

She Stoops To Conjure; Or, The Misspells Of A Night

I love the pun in the title of this story, which takes place in a world inspired by the Regency of Romancelandia, except that it has magic. Celia Eversleigh, a young sorceress of good family, has had her education cut short by her mother, who views magic as an unladylike endeavor. To escape one more boring ball, Celia has created a simulacrum of herself, who can go in her stead, uttering only the phrases “If you please,”  “Thank you kindly,” and “Indeed!”

Meanwhile, Gareth Markham has commissioned enchanted dancing slippers for his awkward young sister from Celia, and Celia’s younger sister, Lucy, is in love with a younger son their mother will never approve of. Throw all these ingredients in the same cauldron, and hijinks are the natural result. Will Celia, Gareth and Lucy all get their hearts’ desires, and if so, how?

The word that come to mind when thinking of this particular story is cute. Celia is an appealing heroine and the story has a lot of charm, but feels short. The title implies that something goes awry with Celia’s spellcasting, but that’s not exactly the case. I was glad that she didn’t make any mistakes on that front, because it meant she came across as competent at her magic. At the same time, I wanted a longer plot with more complications—everything resolved a little too easily and quickly. I had fun reading She Stoops To Conjure, though, so my grade for it is a B-.

A pilgrim arrives at Lady Romillia’s palace with news of Romillia’s lover, Laran. The pilgrim is Laran’s cousin, Jancis of Maldreys. Jancis reports that Laran died while breaching Lady Ishandra’s citadel, injured by “one of her beasts.” Jancis could not save her cousin, but she agreed to carry out his last wish, and deliver a few items to Romillia.

Among the items Laran gave Jancis is the Orb of Al-Karrah. Lady Romillia already possesses the Sceptre of Al-Karrah, and uniting the two could make her more powerful than any other sorcerer. But Jancis has spotted the scrying glass behind Romillia and deduced from a slip of the tongue that Romillia witnessed Laran’s death but would not use her magic to come to his aid. Still, a deathbed promise is considered sacrosanct. What will Jancis do with the orb?

This was an interesting conflict, but I felt the story was cut short before that conflict could be fully explored. The ending wasn’t what I expected at all, and I was disappointing when it arrived because I wanted to know what would happen next between the two main characters. At the same time, I liked the fairy tale feel of the story, and the way the use of detail made the magic feel more real. C for Orb And Sceptre.

Once upon a time—the Queen began, knowing that all the best stories start that way—there was a knight, the younger son of a lord, who accomplished many a brave deed as he journeyed through many a distant land.

So begins The Queen’s Tale, in which a queen spins a yarn for an audience. The knight in the queen’s story marries and has a daughter, Lunete, “with eyes and hair as dark as a moonless night.” Upon their return to the knight’s land, the knight’s family is ravaged by illness. He inherits a holding, but loses his wife. The knight then remarries, and his second wife gives him a daughter, Lysette, “as golden as a sunbeam.”

Lunete and Lysette are as close as sisters can be, but one day the spoiled Lysette defies their father’s warning and rides into the forest to hunt a white stag with silver antlers. Lunete tries to stop her, but after failing, she tags along. But Lunete soon lags behind and when her horse rears, she falls to the ground. When she regains consciousness, Lunete is in a different place, faced with an unexpected choice.

What will Lunete choose? Who is the queen who tells this tale, and why is she narrating this particular story?

I loved Lunete’s story and once again, I was struck by the use of small details to bring a magical world to life. The queen’s own part of the story was sweet and romantic but unlike the story-within-the-story’s conclusion, the ending of The Queen’s Tale felt a bit on the nose. I didn’t need things to be spelled out to such a degree in the last page, but otherwise, I thought this story was lovely. B/B+.

I enjoyed Awakened and Other Enchanted Tales and hope to read more of your work in the future. My grade for the collection as a whole is a B-.