Warning: mysqli_query(): (22032/3141): Invalid JSON text in argument 1 to function json_contains: "Invalid value." at position 0. in /home/customer/www/dearauthor.com/public_html/wp-includes/class-wpdb.php on line 2187
 REVIEW: The Star Kings by Edmond Hamilton
May 8, 2015 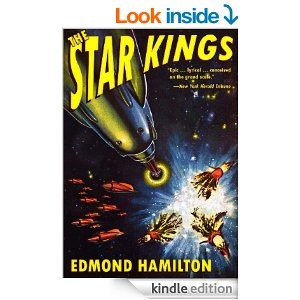 She was Lianna, ruler of the Kingdom of Fomalhaut. He was Zarth Arn, prince of the Mid-Galactic Empire, scion of the ruling house of Star Kings. Only these two stood between peace and a war of galactic conquest. And one of them was an impostor.

The Star Kings is the supreme work by the master of romantic space opera, Edmond Hamilton. John Gordon, a war vet restless in the humdrum of an office job, is offered a chance for adventure when he is contacted via dreams by Zarth Arn, a scientist-prince living two hundred thousand years in the future, and asked to exchange bodies for a week. Zarth will research the present, while Gordon experiences the galaxy-spanning future of the star-kingdoms–200,000 years from now. There is only one stipulation: Gordon must give his word that under no circumstances will he reveal his true identity to anyone of Zarth’s time. Moments later, John Gordon is hurtled through time to the Earth of two thousand centuries hence–into Zarth Arn’s laboratory and body. But, before the week is over, Gordon is summoned to the throne world of Throon by Zarth Arn’s father, ruler of the Mid-Galactic Kingdom. Unable to reveal his identity without breaking his pledge to Zarth Arn, Gordon is forced to play the role of the young star prince, and finda himself i caught in a strange triangle between two women: the intelligent, dynamic Lianna, ruler of the Star-Kingdom of Fomalhaut, whom Zarth’s father has ordered him to wed (and with whom Gordon swiftly falls in love), and warm, tender Murn (who Zarth Arn loves). Galactic civilization is facing it’s greatest crisis, a war of conquest by Shorr Kan, tyrant of the League of Dark Worlds, and before John Gordon can even orient himself to this far future universe, Zarth Arn’s father is assassinated, with Zarth himself framed for the killing. Saved by Lianna, the pair flee on a galaxy spanning quest for the secret of the Disruptor, the one weapon that can defeat the Dark Worlds an preserve the freedom of the stars. And if they succeed, Gordon knows he must return to his own time, losing Lianna, the woman he loves, forever–or deliberately marooning Zarth Arn 200,000 years in the past, separating him from Murn, the woman he loves, forever. Part of Edmond Hamlton’s breathtaking future history series, “The Two Thousand Centuries.” (New, improved edition with spelling errors corrected, a long introduction about the author, space opera, and the book; plus all the original magazine illustrations.) Cover design: J.L. “Frankie” Hill.

Dear readers, this year’s Hugo related conversations made me do two things – purchase a supporting membership for the first time ever and reflect on the classic scifi I read when I was younger. I loved “Star Kings” and “Return to the Stars” when I was a teenager and when I came to US I bought Hamilton’s collection in a Russian translation just to make sure I had them. I figured that in order to write a review for DA I would finally have to read the original. I could not find a kindle version of “Return for the Stars” but the first book, “Star Kings,” was on Amazon and so I dived in. I know Hamilton wrote more books in this universe, but these two are the only ones I have read.

I was really curious as to whether I would still like the book because I have not reread it in years. I found that I enjoyed a lot of it, although some parts were dated of course.

The Amazon blurb gives you a set up that is almost completely correct (any typos in the blurb were copied from Amazon as is). A guy from 200,000 centuries in the future, who is both a prince (it is mentioned in the book that they just give their rulers imperial names, but those Emperors, Princes and Princesses seemed to have plenty of real power) and a scientist, gives John Gordon an offer he can’t refuse – exchange minds with him so Zarth can study his time and John can catch a glimpse of the future, many centuries ahead of his time. They make the exchange and lots of things go wrong for John – the scientist who was supposed to help him study the future so John would not be completely lost is killed, but not before giving John a lengthy exposition in the history of the Galaxies and time travel, supposedlly for his benefit but mostly for the readers. This info dumping did not last for too long, but it was longer than I remembered, that’s for sure. However, after that part the action moves fast and furious. Intrigues, assassinations, and John AKA Zarth Arn is now being framed for the murder of his father and forced to flee with Princess Lianna, who is supposed to be his “political” wife for the sake of diplomacy.

The adventure part of the story was for the most part as fun as I remembered. Granted I have since read far more sophisticated “time travel” stories, but this was still enjoyable and written in a very engaging writing style. My main worry was how I would react to the characters, to the romance, and especially to the female characters. I remembered that Murn, Zarth Arn’s real wife was almost a nonentity in the first story. We learn that she loves Zarth a lot and she figures out that something is not the same about him when John greets her as Zarth, but that’s about it. However I also remembered that Lianna was cool – she was a ruler of her kingdom after all, so she had to be :). And while upon this reread I thought she might have needed more depth, I still thought she was cool. This is a plot-oriented book and all the characters could have used more depth, not just Lianna.

I actually think the villain of the piece, Shorr Khan, had the most potential to be a sophisticated character, and I was happy that we get to meet him again in “The return to the stars”. I liked the guy and appreciated him not being a caricature. I don’t think he can be called an antihero even in the next book, but I liked him.

There is a romantic storyline between John and Lianna which starts with Insta!Love on both sides, but I thought that they had good chemistry while they were having their adventures. It ends happily in case you want to know, but I am not going to tell you how exactly it ends.

I thought that it was very amusing that Hamilton kind of ignored the ending in the “The Return to the Stars,” as in, completely ignored it. He did not destroy their happy ending, do not worry about that, he just wrote a completely different one than expected because he needed to continue the adventure.

My final thought is going to be the following, since as I mentioned in the beginning, Hugo related conversations inspired my review and reread. As I said above, I was not completely disappointed by the portrayal of Lianna, not at all, but I am so, so happy that these days women in scifi can also be portrayed in great depth, such as the two main characters in Aliette De Bodard’s “On a red station drifting”