Elyssa Papa recommended your YA fantasy Keturah and Lord Death to me, saying that it was dark and romantic, and it is both of these things. My husband and I have been reading to each other in the evenings, and we frequently read YA, so I put this one in our reading queue. When the book came from the library, I saw that it had been a finalist for the National Book Award. While I liked Keturah and Lord Death, I didn’t adore it as I was hoping I would. 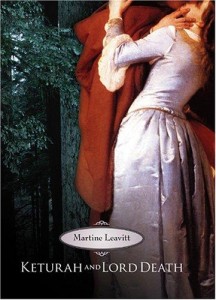 “I was sixteen years old the day I was lost in the forest, sixteen the day I met my death,” begins Keturah’s story. Keturah, the narrator telling the story around a campfire, describes how the elusive hart came to nibble the lettuce in the garden of the cottage she shared with her grandmother. When the hart reenters the forest that borders the garden, Keturah follows him, hoping for a glimpse or two more of the animal. Soon she realizes that she is lost.

After wandering for three days, Keturah accepts that death is coming. And indeed death arrives in the form of a beautiful man. Keturah tells him that she is not ready for his arrival. As they talk, Death is impressed with Keturah’s honesty. The bride of his choice, he tells Keturah, would have her courage.

Keturah protests, and Death acknowledges that she is too young to marry or to die. He asks her to choose another person to die in her place. But Keturah can’t put her life above the life of anyone in her village, and that is when Death informs her that soon, many of the villagers will die regardless because the plague is coming. Since she won’t choose another to die in her stead, Keturah must forfeit her life.

Realizing that pleading with Death is useless, Keturah declares that she will tell him a story of a love so great it could not be conquered even by Death. Death is skeptical, but Keturah begins to tell him the story, and it is her story.

The orphaned girl in her story loves no one, but having seen how deeply her grandmother and grandfather love one another, she longs for her own true love, for a cottage and a baby. Even though she doesn’t know what her true love looks like, she feels she knows him better than anyone. When Keturah says that the girl and her love would see past the scars and marks of aging, Death asks if such a love is possible.

“We will never know, for one day Death came for the girl. She knew that her soul’s heart would love as much as her living heart, and that she would long and ache and mourn for eternity for her true love. She tried to persuade Lord Death, tried to make him see how dark and lonely would be the life of her future love without her. She tried to tell Lord Death how even he would rejoice for the sweetness of that hoped-for love, if only he would let it be.” I was weeping now, for a truer story I had never told. “Death would not be persuaded, for he had found her first, and yet…”

“And yet?” Lord Death said quietly.

“The end of the story I cannot tell.”

“Will not tell—until tomorrow. Let me live, sir,” I begged, “and I will tell you the ending tomorrow.”

Death releases Keturah—but only for another day. He gives her one more boon: if she finds her one true love in that one day, he will allow her to live. But if she fails, he will not only take her life, but make her his bride, a thought that horrifies Keturah.

Keturah is found in the forest near her cottage by the handsome John Temsland, Lord Temsland’s son, who carries her home. When she returns to her village, her grandmother and her friends rejoice, but other villagers whisper that she has been with faeries. Only Keturah’s two friends, Gretta and Beatrice, learn the truth of what happened to her.

Beatrice and Gretta advise Keturah to find her one true love quickly. Gretta suggest Tailor, but Keturah think his precise stitches make him perfect for the exacting Gretta. Beatrice offers up Choirmaster, but Keturah believes he would be perfect for sweet, godly, and musically-inclined Beatrice. There is Ben Marshall, but family tradition requires him to marry the girl who wins the Best Cook prize at the village fair.

The next morning, Keturah has two tasks in her mind. Warning Lord Temsland’s son John that plague is coming and the village must be cleaned in the hopes of forestalling a catastrophe, and going to the witch, Soor Lily, for a charm that will help her tell who her true love is. Although Soor Lily exacts a heavy price, she gives Keturah the charm she requires – an eyeball to carry in her apron pocket and touch as she looks at each man in her village. If the eye stops moving, it means the man is Keturah’s one true love.

Will the eye stop for Tailor with his perfect stitches? For Choirmaster with his beautiful music? For Ben Marshall and his wonderful vegetables? For the handsome John Temsland who respects Keturah above anyone else in the village? Or will Lord Death come for her?

Keturah and Lord Death is a short book with the feel of a fairy tale, one that hearkens to other myths and stories. As I was reading it, I was reminded of Persephone and of Scheherazade. Like Persephone, Keturah doesn’t want to be the queen of Death’s realm, and tries to resist this fate. Like Scheherazade, she uses her gift for storytelling to extend her life.

In the beginning of the story, I wasn’t sure I would like Keturah, since the way she went about telling the villagers to clean up the village struck me as bossy. She was also choosy when it came to the male villagers. Though faced with her own death, she could not feel attracted to any of them. But in the latter two-thirds of the novel, when the challenges in Keturah’s path grew, I began to admire the courage with which she faced them.

The prospect of impending death made the village of Tide-by-Rood and each of its inhabitants that much more dear to Keturah, and gave the story some poignancy and darkness. Many of the villagers did not always return Keturah’s regard, but others remained in her corner.

Although Keturah looked at several men while using Soor Lily’s charm, I felt that the only two candidates for her heart were the two at whom she hesitated to look: Lord Death, who loved Keturah in a cold and relentless way, and John Temsland, whose love could perhaps keep Keturah from Death, but from whom she was separated by the difference in their stations.

But although I enjoyed reading Keturah and Lord Death, I did not find it quite as intense as I had hoped until its final pages. I think this may have been due to fact that much of the story felt predictable. I guessed at many of the turns the plot took, and only rarely felt surprised. Also, although the prose was spare yet descriptive, something I often love, the sentence structures felt stilted at times, especially since my husband and I were reading the book aloud.

An example of this is the line I quoted above, “She tried to persuade Lord Death, tried to make him see how dark and lonely would be the life of her future love without her.” This probably seems like a small thing but it was a constant distraction. According to the prologue, Keturah is telling her story around a campfire, and after reading or hearing the entire book read aloud, I have come to the conclusion that the narration is too formal and stilted for a campfire story.

These issues aside, Keturah and Lord Death did work for me, not so much as a love story, but as a fable about love and mortality. C+/B-.