I’ve read several of your other books and enjoyed them—I liked your novella “Capturing the Silken Thief” (reviewed here). I also liked “An Illicit Temptation” but didn’t love it—it felt incomplete to me. I bet, however, if I’d read the companion novel, My Fair Concubine (reviewed here), I would have appreciated your novella more. Jayne did read My Fair Concubine and shared her perspective on “An Illicit Temptation.” 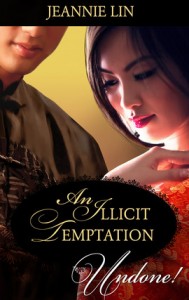 In this story, a young Tang servant girl Dao is masquerading as a Tang princess by decree. She has willingly taken the place of another woman—Pearl, whose story is told in My Fair Concubine. Pearl was promised in an alliance marriage to the chieftain of the Khitans– he rules a Mongolian Kingdom in northeastern China.

It’s a long journey from Changan, the Tang capital city, and Dao is escorted by a huge caravan led by Kwan-Li, a handsome warrior/diplomat. Kwan-Li knows nothing of the Dao’s true background—he believes she is the privileged Princess An-Ming. When their cavalcade is attacked, Dao and Kwan-Li flee and travel through the steppes on horseback as they head for the Khitan settlement and Dao’s impending wedding.

Dabney: I felt as though I had been dropped into the middle of Dao’s story. Consequently, I had a hard time understanding her motivations and feelings. She’s a worthy, interesting woman but I felt I had an outline of her rather than a fully formed character.

Jayne: I had wondered how well someone new to the series would be able to follow it. For me, it was a nice trip back to catch up on this spirited woman. She’s a very strong character in the “Concubine” book and it’s nice – at the end of that book – to see her get a chance at a better life than she could have hoped for as a servant. There are also shades and hints in this novella of her still strong devotion to the household she grew up in and how what she’s doing is helping them save face.

Dabney: I had an easier time making sense of Kwan-Li. His story is fascinating—he’s Khitan but was sent to Changan when he was 15. He develops over the course of the novella and the ways he changes how he sees Dao and his destiny were cogent and compelling. I did wonder at how quickly he and Dao fell in love, although I wondered more about her. She’s determined to do whatever it takes to better her life—and becoming the wife of the Khitan khagan will lift her eons above the life and social standing she had as a servant in Changan. I was startled at how easily she takes Kwan-Lei into her bed, knowing she risks pregnancy and perhaps alienating her husband-to-be by her lack of virginity. (No one seems overly worried about the latter issue so it may be the khagan wouldn’t have had that expectation for his bride.)

Jayne: Yeah, that was a little fast. But by this point, Dao had been thinking about the “old” man she was being sent to marry and having feelings for Kwan Li. I think she also figured that she could fake her way through the wedding night and that the wedding was so close in time that any child would probably be accepted as her husband’s. So…not entirely honorable but then she was making a sacrifice in putting aside any dreams of love. Plus she tells Kwan Li – I want the first time to be with someone I know and since he kissed her first, I guess she thought he would have a care for her during her first time. I would also have loved a little more time learning about Kwan Li’s past, about his time in Changan about the plans he started the book with.

Dabney: So, for me, the weakest part of the story was the romance. I didn’t mind that as much as I normally would have—and the romance isn’t bad, it just felt skimpy—because the context of this story is so fascinating. In the best way, it was like reading a mini-primer on a part of 7th century China I knew nothing about. I learned about not only the Khitan Empire but also about the Uyghur Empire and the complex relationship the two empires had with each other and with the Tang Dynasty. Ms. Lin does a fabulous job of showing how and where the Khitans lived.

Jayne: I totally agree with you here and think Lin does a fantastic job integrating history into her stories. When I finish one of her books, I usually feel I’ve – relatively painlessly – learned a lot and that – this is almost as good – that what’s there is pertinent to the story and not just for show.

It was as if heaven and earth had changed places, she had never considered such a thing.

Here, Dao hears Khitan music played by a fire in a small settlement:

An elderly man pulled a bow across a stringed instrument with a long, thin neck. The wailing sound she’d heard earlier now took on an effusive, resonating quality, filling the entire circle with a racing song, like the stomp of hooves across the plains. The music was as indecipherable and mysterious to her as the language and customs of this land.

The only place Ms. Lin’s language seemed to stumble was in her sex scenes—there, her words were sometimes so vague I wasn’t sure what was actually happening.

Jayne: Her style is easy to read, not dry and not too lurid or overly flowery.

Dabney: I’d give it a B- with the admonition it can’t easily be read by itself.

Jayne: I’d give it a B just because I have a little more background on Dao’s character so the brushstrokes weren’t as sketchy to me.