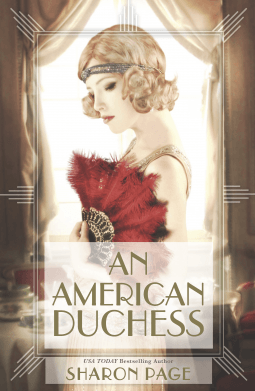 At the height of the Roaring Twenties, New York heiress Zoe Gifford longs for the freedoms promised by the Jazz Age. Headstrong and brazen, but bound by her father’s will to marry before she can access his fortune, Zoe arranges for a brief marriage to Sebastian Hazelton, whose aristocratic British family sorely needs a benefactor.

Once in England, her foolproof plan to wed, inherit and divorce proves more complicated than Zoe had anticipated. Nigel Hazelton, Duke of Langford and Sebastian’s austere older brother, is disgraced by the arrangement and looks down upon the raucous young American who has taken up residence at crumbling Brideswell Abbey. Still reeling from the Great War, Nigel is now staging a one-man battle against a rapidly changing world—and the outspoken Zoe represents everything he’s fighting against. When circumstances compel Zoe to marry Nigel rather than Sebastian, she does so for love, he for honor. But with Nigel unwilling to change with the times, Zoe may be forced to choose between her husband and her dreams.

Oh, how I wanted to like this book. It’s got the hot setting of the British aristocracy in the 1920s, it’s American heroine meets British hero, it’s duty and love but it turned out to be – for me – guilt, grief and gaiety with a heavy helping of the first two elements.

From opening page, I can see that Zoe is a woman of determination and practicality. She’s all modern and fully aware that it’s only her money that has opened doors for her. But she’s going to get her money from her trust fund and then see to it herself, investing and managing it as she wants. She’s embraced the changes sweeping the world in the post-war era and won’t apologize for it.

Nigel is appalled at her and her American ways. He is old fashioned and is proud to cling to social norms, manners and gentility that seems to have got blown away by the four years of war that have scarred him mentally as well as physically. He’s not some romantic clinging to ideals of married love but he finds the arrangement made between this brash American and his younger brother to be vulgar and in the height of bad manners.

It’s modern vs old world, full speed forward against trying to maintain the standards of a lifetime. Yet even though these two look at the world in very different ways, they’re more alike than they initially think. Both are fiercely devoted to family, determined to see to the welfare of those dependent on them and grudgingly admit to finally seeing the good in the other’s way of thinking. Each also sees below the surface mannerisms the other uses to shield feelings – Nigel pretends to be icy and in control while Zoe rushes into wild society and either shocks or – in the case of Nigel’s older relations – lives down to their horrified expectations of her.

Zoe discovers in Nigel a man who has been raised on not only the word duty but the meaning. He sees to the needs of not only his immediate family and the family stately pile but also the tenants who live there and who would lose their livelihood if he’s forced to sell off estate land. In Zoe Nigel finds a woman who revels in the modern technologies that he saw at work during the war and which he sees the world racing to embrace. She shows him that fast cars and aeroplanes aren’t just things he must endure but things that can set you free and make you feel alive again.

When I read the blurb, I wondered what event would precipitate the marriage. Well, these two certainly did flirt with propriety enough along the way and participate in so many possible public scandals that it was a wonder they didn’t get caught earlier than they did – tonsil tonguing outside a popular London nightclub, skinny dipping in the estate pond during a massive party attended by all society, public sex on the estate grounds… they all but stripped naked, dyed themselves orange and did backflips through the portrait gallery.

Unfortunately, once the engagement/marriage starts, my problems with the characters and story really began.

Zoe supposed to be so “in charge” and “not to be messed with” yet making her bold rebel statements, she keeps yielding to everyone about almost everything. True she’s doing it from the heart and to help people but in the end, her backbone is a touch bendy for how strong a woman she was initially presented as being. The section wherein engagements are broken and marriage proposals are made is draggy. Zzzzzzz. This is also the point at which the soap opera starts.

Zoe and Nigel just keep racing around the same closed track of their issues and not really getting anywhere for a long, dank, mournful time. This is not happy, light reading here – be forewarned.

Grief and woe abounds. Lots of grief and lots of woe. This is where the trigger warning applies and if it applies to readers, then I would strongly suggest they heed it. OMG – this is a never ending soap opera of angst and woe. Every chapter does a two step forward of slight healing followed by one and a half step back of horrible event. Zoe sinks to the depths of depression over their loss then Nigel goes all “woe is me it’s all my fault” about the war affecting the families of his dead men and how he ought to have saved them all.

Then Zoe treats us to another attempt at defying the restrictions placed on her – though they are really not many – followed by a reason why she must give up her dreams/plans which ends in still more grief. This time though, I totally agree with Nigel. What the hell was she thinking? I wanted to grab a chamber pot and bash her over the head.

By this time I was anticipating some new awfullness that was going to befall Zoe or Nigel, or both of them, in each chapter. It was morbidly fascinating to guess what new disaster would be heaped on them. Instead of continuing to read in hopefulness of them finally starting to get past the PTSD haunting Nigel and the grief felling them both, I frankly just wanted the whole book to be over.

Even when they’re attempting to reconcile they fight and flail at each other. Plus guilt – mustn’t ever forget that. Nigel has finally decided to break out of his shell – and BTW there’s no mention of if he continues to have his PTSD nightmares on the ocean voyage or rail trip – and go to American and get his wife back but he still argues and orders and they’re back to the same old, same old with few pages of the book left. Finally he tells Zoe, “maybe I should do the decent thing and let you go” and I thought – hell yes and put us all out of our misery.

Then we wind things up with some good old Southern California therapy wherein Nigel finally bears his inner scars to Zoe, does some cathartic crying while Zoe holds him close and soothes him followed by very public sex on the hood of a car on a street at night – yep that’s all that’s needed to overcome five years of PTSD. No wait, the guilt is still there even after hours of hawtness. Finally Zoe saves the day in a subplot of Nigel’s duty and guilt and responsibility.

Looking for an angsty historical with hawtness? Look no further. Want to watch two characters torture themselves with angst even up until the very end? It’s right here. Want the confessions to drag until the final page? This is your story. After a beginning that had me hopeful, came the second half that I just wanted to end. B- for the first half and D for the second.