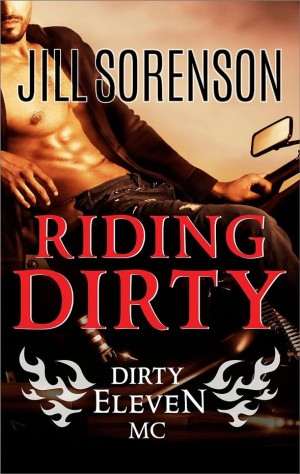 I remember you mentioning on Twitter or a maybe in a blog post that you decided to write an erotic MC (Motorcycle Club) book at least in part because of the popularity of the genre. It is somewhat out of the usual way for you.  It is darker and definitely hotter than your previous books.  That said, it still holds true to what I know of you from chatting with you on social media.  This isn’t a book which lionises MC culture or crime. It doesn’t camouflage the criminal element of an outlaw MC or romanticise it. Because of that I think it will appeal even to readers who don’t normally like MC books.  I also think it stands as proof that a skilled author can write to a trend without sacrificing quality or voice.

Mia Russo (aka Mia Richards, aka Michelle Ruiz) barely survived a home invasion which resulted in the death of her husband three years earlier.  She entered the witness protection programme and has recently returned to California in order to be near her mother, her only living relative, who is in a nursing home at the end stages of Alzheimer’s.  The book explains how she came to be back in California and why and, if it’s not completely kosher in terms of how WITSEC  operates (and I don’t know if it is or not) it felt believable within the context of the book and I was prepared to go with it.

ADA Damon Vargas is the only person who knows her real identity.  He works in the gang crime area and has a real hard-on for putting MC members behind bars.   Damon has offered Cole “Shank” Shepherd a deal: become a criminal informant (CI) and get out of jail six months early (and alive – the Aryan Brotherhood has him in their sights and it’s not very likely he will survive until the end of his sentence).  Vargas poses as Cole’s “parole officer” and Mia is his “life coach”.  It is a little unclear why Mia needs to be involved – Vargas asked her to work pro bono so he could keep this assignment “off the books”, but perhaps it is standard for a newly released criminal to have coaching sessions with a psychologist to help them adjust to life outside of jail.  However, given that it is an off the books operation, it doesn’t seem likely that Vargas actually cares about Cole’s mental health. (We do find out later he has his reasons.)  In any event, Mia appears to take her role seriously and offers Cole  a safe space to relieve the stress of being a CI and also assists him with strategies to control his temper and hopefully, stay out of jail.

Mia has an ulterior motive (in this book, everybody does). WITSEC would never allow her to work with a member of an MC given the circumstances of the home invasion.  She does have experience counselling female inmates but this assignment is a different beast entirely.

Mia was able to identify one of her attackers as Gordon “Gonzo” Lowe, the president of the White Lightning MC.   There was insufficient evidence to arrest Lowe and so Mia was put into WITSEC and Vargas kept trying to identify the other attacker/uncover more evidence which would allow an arrest.  Mia’s plan is to use Cole as a weapon – she will seduce him and entice him to kill Lowe and the other (to be identified) attacker.   Which is kind of an odd juxtaposition with her apparent dedication to her professional role.  I read it that the dedication was Mia’s default and also that she had to play it straight with Cole at the beginning in order to get him to trust her. The therapy sessions had the ring of truth to them and also were not without humour.

She studied his clenched fists and his scarred, tattooed knuckles. T-I-C-K T-O-C-K. “Do you often give in to violent impulses?”

“Have you tried to make healthier choices?”

His eyes narrowed in disbelief. “Is that a serious question?”

Mia is presented as someone who is stuck in her grief. She was very happily married and her life was completely blown apart by the home invasion. She does her work well but it doesn’t satisfy her. She feels nothing much more than her desire for retribution.  She knows what she is planning is morally wrong and professional suicide but she doesn’t care.  She counts the cost and decides it’s worth it.  I appreciated that the professional consequences of her actions weren’t diminished.  I also appreciated that pretty soon after meeting Cole, when he becomes a real person to her rather than just a blunt weapon to be used, she (minor spoiler alert) abandons her plan.

Almost immediately on meeting Cole, Mia starts feeling again. For the first time in three years, she feels attraction and desire.  She begins to care for Cole and think of him as a person with needs and desires of his own.  She goes from thinking that seducing him might not be so hard, to knowing she can’t go through with it, to being helplessly swept away by the heady feeling of having desire and passion again.

It’s not hard to see why Cole is attracted to Mia – she’s classy and beautiful and smart – not surprisingly, he feels she is out of his league but if she wants to go slumming, he’s happy to accommodate her.

Cole is conflicted by his role as CI and his love for his uncle, “Wild Bill” Shepherd, the president of the Dirty Eleven MC.   The Dirty Eleven run marijuana and some guns, but has a strict “no hurting women” policy.  Vargas wants the goods on the Dirty Eleven and Cole wants to find out what happened to his brother Rylan (who was a character in your earlier novel, Badlands I believe).  Bill and his wife, Shawnee, raised Cole and Rylan from adolescence when their parents got hooked on meth.  While their life wasn’t sunshine and roses, there is nevertheless a bond between them and this makes it hard for Cole to think of turning on Bill.  However, Cole was devastated by the death of his brother and if he finds out Bill had anything to do with it, that loyalty isn’t likely to withstand the pressure.

When Cole finds out that Dirty Eleven have been working with White Lightning, he is not happy.  White Lightning do hurt women and have a big meth business – neither of those two things fly with Cole.  Cole went to jail the first time after he beat a White Lightning member (Jesse “Jester” Arno) nearly to death after Jester raped Cole’s 15 year old cousin. I liked the way you expressed the ambiguity of Cole’s relationship with the Dirty Eleven.

Cole shrugged out of the leather garment and tossed it on a chair. His expression was a mixture of pride and contempt, as if the vest was a rowdy dog he loved that had nevertheless bitten a small child.

All of the players have ulterior motives and all of them are involved in shady dealings in one way or another.  Nevertheless, Cole and Mia’s attraction grows and pretty soon, Mia gives in to it and they start seeing each other outside of the therapy room.  The sex is off the charts hot and plentiful.  It is also a bit on the kinky side.  It’s much hotter than other books you’ve written but I must say I think you have a gift.

Mia is a different person to Michelle Ruiz.  While Michelle and her husband, Phillip, had a “better than good” sex life, the home invasion and its aftermath so changed Michelle that she became, in many ways, unrecognisable.  Michelle Ruiz would never have looked at Cole with desire or passion; Mia can’t help it. I thought you did a great job of explaining Mia’s attraction to Cole and I appreciated that Phillip wasn’t demonised (or sainted for that matter).

Cole feels stuck in the criminal world but would like to make changes. He does have a core of “honour” to him but he is not a “good” man in the usual hero type of way.  He is a man who has made mistakes, who has let his temper get the better of him to his detriment, and who doesn’t have a great deal of respect for the law.  While he wants things to be different, he’s never going to turn into a clean cut Mr. Nice Guy.   As it happens, Mia wouldn’t know what to do with a Mr. Nice Guy anymore and, even though things seem impossible, she does begin to wish they could have a future together.

I was really wondering how you were going to pull it all together by the end because things were indeed looking impossible for Mia and Cole.  I liked how, even in the romance genre where the HEA is guaranteed (or at least it better be or Kaetrin gets stabby), you kept me guessing.  While there was one element of the denouement I felt wasn’t set up quite as well as the rest, overall, the resolution felt believable and authentic and also delivered the romantic ending I was after.

It is clear that you are lovingly familiar with the areas in California where the book is set and it has a wonderful sense of place.  I also loved how you embedded Mia’s cultural heritage into the story. I’m not an expert but it didn’t feel fetishised, while at the same time, it clearly formed part of her. If one took those aspects of Mia away, she would have been a very different character.

The writing is mostly kind of spare, with short sentences that can sometimes seem choppy.  On the occasions when you let your adjectives out, they shone against the sparse backdrop and gave those passages extra punch and emotional authenticity.

“You look like you’re having a bad day. Let’s combine your bad day and my bad idea, and be bad together.”