REVIEW: The Weaver Takes a Wife by Sheri Cobb South 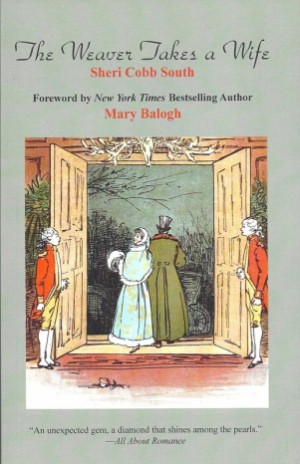 Beautiful, haughty Lady Helen Radney is the daughter of a duke who has gambled away his fortune. The duke’s plan is to marry her off to recoup his losses, but the only one interested in this sharp-tongued lady is Mr. Ethan Brundy. Once a workhouse orphan, Brundy is now the owner of a Lancashire textile mill, a very rich man–and smitten with Helen.

I vividly remember when I first heard about this book. Back then, I was a faithful visitor to AAR and closely perused their DIK list in my quest to expand my romance reading lists. After reading their review, I immediately added “The Weaver Takes a Wife” to my handwritten TBB list and began searching for it in local stores. I searched high and I searched low. I went through new book stores and used book stores and finally had to order it. But oh, when I finally got my hands on it, I fell in love with Ethan Brundy and his ‘elen. Now newcomers to the series can buy the ebook with a few mouse clicks – lucky devils.

The book might be a touch of Almackistan but not by much. Indeed, it still sticks to the conventions of the genre while at the same time turning them on their heads. It has a non-Duke hero with a lower class accent but manages to include a trip to Almacks. The hero is finally dandified in a form fitting evening coat but it’s not from Weston. The aristocratic heroine might have her nose in the air but she ultimately falls in love with her workhouse brat husband. It is an homage to La Heyer yet carves out a new niche in Regency romance.

Ethan is such a wonderful hero. He’s unfailingly cheerful, mostly happy with his lot in life, aware that things could be so much worse and willing to help those he can. He also seems to be a shrewd businessman, an excellent judge of character and a true romantic. His friends in the ton adore him, including his friend’s lady love who is willing to teach him how to waltz so he can dance with his wife. He makes people want to do better and also pricks the conscience of those in a position to help craft new laws for the poor and working class. And Ethan even helps his friend come to the sticking point with his own romance.

He initially lets drop how much he values ‘elen in terms she’d understand – to the tune of £75,000 – but later reveals his heart when asked why no woman in Lancashire had snatched him up and he’d moved to London – because that’s where ‘elen was. Ethan, more than most men, is aware that nothing worth having is easily obtained so he’s ready to put in the work to win ‘elen’s ‘eart.

“What could one do with a man who merely smiled at one in a way that made one feel suddenly hot and cold all at the same time?”

He astounds ‘elen by simply not recognizing his inferior status. Ah, but she has to learn that this is because he never feels about himself that way except where her love might be concerned.

Mr Brundy might be a man of low birth but he’s also a man of the highest integrity, resourcefullness and determination. He gently waits for his wife’s regard, all the while showing her his worth by his actions as well as his words. Indeed, bit by bit, day by day, gesture and deed by gesture and deed, he shows up almost everyone who would dismiss him as merely a workhouse brat.

Folks this is unconditional love. Does ‘elen deserve it? Frankly early on in the marriage, I wanted to shake her. However one can’t stay too mad at her since she’s probably never known a man as wonderful as Ethan – though her brother shows signs of being salvageable.

‘elen’s changing opinion comes slowly but so clearly – to us and to Ethan – that her brusqueness is easy to bear because we all know she’s falling in love with her besotted husband. She worries about the Luddites and defends him against her former beau Waverly’s sneering.

She discovers she likes the look of his face when it’s not hidden behind an epergne. She sees how his workers adore him and why and strives to present him in London to them in the best light possible. She sees he’s kind to children in a way she and her brother never experienced while growing up. She mourns a honeymoon trip to Brighton because she worries about Ethan thinking she’s using him to help her brother then finally thrills to his KISA rescue. By book’s end, she has realized, and happily admits, that he’s the finest true gentleman she’s ever known.

I love this book because it not only tells me about all the characters but it shows me all their flaws, foibles and strengths. It’s storytelling in action, it’s alive with movement rather than feeling static. It’s funny (watch for the hilarious below stairs view of the marriage through the morning reports of upstairs maid Sukey to the housekeeper Mrs.Givens) as well as heartfelt and by the time ‘elen decides she’d rather not wait the full six months (you’ll see what I mean), I’m bursting with happiness for them and the love they’ve found.

I adored this book 15 years ago and after a blissful reread, I can say that it’s just as good the second time around. A