REVIEW: A Conspiracy of Kings by Megan Whalen Turner 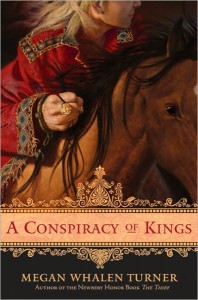 By the time I got my hands on The King of Attolia, though, I was enthralled with almost every page, and I am happy to report that the fourth book, A Conspiracy of Kings, which was just released on March 23rd (Can you tell I've been counting the days?) is nearly as satisfying.

My reviews of the earlier books can be found here:

Before I review A Conspiracy of Kings, I want to warn readers that due to the way these books are written, it is almost impossible to discuss any of the later three books without giving away spoilers for the earlier books in the series. Therefore this review will contain SPOILERS for books 1-3. Readers who have not yet read these books, who may want to read them and who prefer to avoid spoilers are advised to read no further.

Like the other books in this series, A Conspiracy of Kings is set in the fictional kingdoms of Sounis, Eddis and Attolia, which are patterned on Greece. But this book differs from the others in that the focus here is not Eugenides, the hero of the first three novels in this series. Gen does make an appearance in this book, and play a significant role, but in this book, the main character is Sophos, Gen's traveling companion from The Thief.

Readers of the earlier books may recall that Sophos disappeared in The Queen of Attolia, and in this book, we learn what befell him at that time, and during the events of The King of Attolia as well.

A Conspiracy of Kings begins with a third person prologue in which Sophos and the Magus (his elderly, wise advisor) arrive in Attolia and try to attract attention from Gen (now the king of Attolia) without drawing any to themselves. As Eugenides and his wife ride in an open coach, Sophos aims a peashooter at Eugenides, but Gen does not show recognition even after being hit with the pea.
Eventually, though, the Magus and Sophos do manage to gain an audience with Eugenides, who greets Sophos warmly-‘at least until he hears that Sophos is now king of Sounis.

What is the king of Sounis doing arriving in an enemy country without a retinue? In the next several chapters, Sophos narrates his story in first person, and we learn where he has been all this time and why he arrived in Attolia as he did.

Sophos' tale begins in the country of Sounis, back when he was nephew to the king and heir to the throne. His father could find nothing right with Sophos, who was more interested in poetry and plays than in swordsmanship and political machinations. As Sophos tells it, his father blamed the Magus who had been Sophos' teacher, and had Sophos sent to the island of Letnos to study under new tutors, first one who indulged in drinking, then another who turned abusive.

One day, Letnos is invaded by a company of armed men. Sophos manages to overcome a couple of them, and to herd his mother and sisters into a hiding place in the ice house. But then he is captured and gagged, and has to watch helplessly as the villa is burned. Sophos is filled with grief for his sisters and mother, and anger that is directed at both himself and others. He refuses to cooperate with his captors, who reveal their intention to kill the king and use Sophos as a puppet monarch in his place.

The man who takes charge of Sophos is a slaver named Basrus. Sophos' face is scarred and his hair is dyed so he will not be recognized, and he is then taken on a slave ship to the island of Hanaktos. But there the captors' plans go awry. Basrus leaves Sophos in the care of another slaver for a short while, instructing the man that Sophos isn't for sale, but while Basrus is gone, a baron's softhearted daughter, Berrone, decides to rescue the slave that is Sohpos. The price she offers for him is so handsome that Basrus's friend sells him despite the orders to the contrary, and Sophos finds himself in Baron Hakantos' home- only to realize that the baron was in on the kidnapping plot.

The baron, however, does not know that Sophos was purchased by his daughter and is now among the field slaves, and Sophos does his best to act the part of a slave so as not to draw attention to himself. Sophos worries that he is becoming what he is pretending to be:

My freedom was like my missing tooth, a hole where something had been that was now gone. I worried at the idea of it, just as I slid my tongue back and forth across the already healing hole in my gum. I tasted the last bloody spot and tried to remember the feel of the tooth that had been there. I had been a free man. Now I was not.

But as time goes on, Sophos is surprised to realize that slavery has become a strange comfort to him:

I was still happy. It was no rest day. I faced a day in the hot sun, shifting dirt and stones, with scant food and ignorant company, and I'd never felt so much at peace. I laughed at myself as I shifted on my pallet for a more comfortable spot and a few minutes' rest. Let me be beaten, I thought, and then see how well I liked being a slave. Too soon the overseer knocked on the doorway with his stick, and we all rose, grumbling, for another day.

I had grown skilled at shifting dirt. If I couldn't compete with some of the men in the field with me, I could keep up with most of them. I worked hard, I slept well at night, and I dreamed often. I grieved, but a part of me felt a lightening of the burden I had carried all my life: that I could never be worthy of them, that I would always disappoint or fail them. As an unknown slave in the fields of the baron, I knew the worst was over. I had failed them. At least I could not do so again.

Eventually though, an opportunity to change his circumstances comes along, and Sophos must choose whether to maintain his disappearance or to step forward and claim a throne he never wanted.

A Conspiracy of Kings is an immensely satisfying book and probably my second favorite in the series, after The King of Attolia (I loved the last third of The Queen of Attolia to bits but I thought the book took too long to get there).

While Sophos isn't as charismatic or amazingly multifaceted a character as Eugenides, he is still very sympathetic. It is interesting to compare his portrayal here to the one in The Thief. In that book, which was told in Gen's first person POV, Sophos came across as younger, but very sweet and lovable. In this one, Sophos is the main POV character (the book alternates between his first person POV and omniscient third person). We see though his own eyes that Sophos is hard on himself, and doesn't always paint himself in a flattering light. For this reason, I found him a little less lovable here, but more complex and compelling.

This is a story about how a young man begins to come into his own, and Sophos' journey to greater self-confidence kept me turning the pages. I shared in his grief for his mother and sisters, in the freedom he experienced at a time when he was (ironically) pretending to be a slave, in his dreams of a magical library, in his love for and wariness of his friend Gen turned king of an enemy country, and in his longing for the woman he had loved for years.

There is one thing I'm torn about. I would have been disappointed had there been less of Gen in this book, yet at the same time, I did feel that Sophos faded a bit during those third person sections in which Eugenides appeared. The problem is that Gen has turned into such a compelling character that he casts most of the other characters into the shade. Thus, much of the book was Sophos' story, yet when Gen's presence was felt, the book became something else, and for this reason, it took some getting used to the transitions between the first person and third person sections.

I would have loved for there to be more of Irene (Attolia) in this book. She was mostly in the background and I greatly missed her. There is one scene in which Eugenides describes the moment he knew he was in love with her, and that is probably my favorite scene in the whole book.

As for Sophos' own romantic relationship with Helen, the queen of Eddis, it really tugged at my heartstrings to see how much she meant to him and I felt his love for her even when they were apart.

I have just a few more quibbles. One is that I never got a good fix on Sophos' father. The book seemed to alternate between two interpretations of this character. Also, the section just before the book's climactic scene felt a bit slow, one plot turn was a bit convenient, and in discussing the book with my friend Elle, she pointed out another contrivance that I hadn't noticed.

Nonetheless, I enjoyed A Conspiracy of Kings tremendously. Adventure, intrigue, and romance – this book had them all. That climactic scene near the end was thrilling, the love story was both poignant and romantic, and then there was Eugenides, who is such an amazing character. Although Sophos could not equal Gen in that regard, he was still interesting, sympathetic, and worth rooting for. A- for A Conspiracy of Kings.

PS I hope there will be a fifth book in this series — it seems like there is plenty of fodder for one. And if there is another, I personally would love to have one of the women as a main POV character. You write such strong and interesting female characters that I wish I could see more of them. I also adore Eugenides, so of course I can't wait for more of him, too.

This is a book published by one of the “Agency 5” but it is a hardcover and the ebook price is $9.99