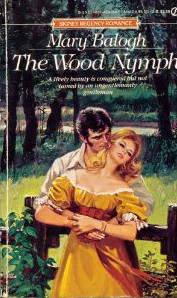 Recently I reviewed one of your older traditional regencies, A Chance Encounter. I enjoyed that book immensely, especially considering that it is a quarter century old, so much so that shortly after finishing it, I dug up its sequel, which had been lingering on my TBR shelf for a few years.

The Wood Nymph was published by the Signet Regency line back in January of 1987. It is a hard-to-find, out-of-print book, and now that some of your older books are being reprinted, I hope that it will find its way back to print as well.

The novel opens with a scene in which the Countess of Claymore is discussing with her three daughters the arrival of an eligible bachelor in the neighborhood. Emily, the oldest daughter, is haughty and dignified, focused on the “superior tone” that Mr. William Mainwaring’s presence will add to the neighborhood. Melissa, the middle daughter, is superficial, and therefore more concerned with Mr. Mainwaring’s wealth and appearance. But Helen, the youngest daughter, isn’t concerned with Mr. Mainwaring at all. Instead, she is daydreaming and longing to return to her special place in the woods.

She had not been to her private place there for three whole days, and she was beginning to chafe against the restrictions of home. She knew that Emily was right. She was a grown woman now, and she should be taking an interest in the activities of womanhood. She should be interested in her appearance and in visiting and attending all the social activities that rural living could not offer. She should be interested in finding an eligible husband. She should be joining wholeheartedly in the feminine chatter of her mother and her older sisters. But, oh, she could not.

Her own world, the one she had built up through the years of her girlhood, was still far more attractive to her than she could imagine the real world ever being. Reading and painting and writing could still inspire her with more passion than the prospect of a new gown or ball. And sitting and gazing at nature around her was infinitely more exciting than sitting in the drawing room listening to the polite conversation of her family and the current visitors. She found it all painfully boring and unsatisfying. If matters were left to her, they would never either visit or entertain.

And that is Helen in a nutshell, at least in the beginning of the book. An idealistic and artistic girl, she is viewed as a little strange by some in her community. When William Mainwaring comes to call on her family, she sneaks away to her spot in the woods, which happens to be just over the boundary between her father’s property and William’s. And so William doesn’t meet Lady Helen Wade that day.

William is still suffering over the loss of Elizabeth in A Chance Encounter, and he does not believe he can ever love anyone else. But one day, after receiving a letter from Robert and Elizabeth in which they attempt to renew their friendship with him, and feeling the need for solitude as a consequence, he walks to a corner of his woods and discovers Helen. She is barefoot and dressed in an old, shapeless, too-short dress that she has changed into for comfort, so William does not realize who she is. Helen is startled when she becomes aware of his presence:

A man was leaning one shoulder against a tree some distance away, arms folded, watching her. She knew at a glance that he was Mr. Mainwaring. This was his land, after all, and one could hardly expect to find another strange and fashionable young man wandering in this particular area, especially when the young man was tall and dark. Yes, and handsome. Melly had been quite right. Helen did not move. She just continued to look.

Helen could feel her face flushing. She felt horribly embarrassed to be caught thus, in this position and in these clothes. She, Lady Helen Wade!

“Oh,” she said, and rolled over onto her knees. “you did startle me. I thought you were a wild boar at the very least.” In self-protection, almost without realizing she did so, she used the North Country accent that the servants always used, instead of talking in her own voice.

When William assumes she is a commoner and then asks her name, in her shyness, Helen introduces herself as Nell. The conversation that follows is a novelty for both Helen and William; Helen because instead of dismissing her imaginative musings on nature, William shares her feelings about it, and William because the pretty little “wood nymph” distracts him from his broken heart. He makes “Nell” a gift of a nearby little hut on his property, and agrees not to go inside it. Little does he know that this is the place where Helen keeps her regular clothing and poetry books.

William and Helen meet again in the same place, and from their intuitive understanding of each other, an attraction blossoms. They begin to express their feelings sexually. Although Helen is nineteen and William thirty-one, both are virgins, and neither entirely realizes what it is that is happening between them.

Afterward, William feels guilty for having taken advantage of a poor village girl, and Helen for concealing her true identity from William. Helen’s sister, Melissa, has meanwhile maneuvered William into the beginnings of a courtship. William, in his ignorance of Helen’s real status in society, is both guilt-ridden and grateful for the respite “Nell” has given him from his broken heart, and sees their connection as one of physical affection. Helen though, recognizes that she has deeper feelings.

I don’t want to give away where things go from there, but suffice to say that both Helen and William make some very unwise choices, and in the case of Helen, she continues to make them almost until the last page. The two spend more time apart than together, and the relationship gets into a holding pattern in the middle of the book. The plot calls for Helen to make decisions that might have been difficult for me to comprehend in a girl of her background and era, if not for the way her character is established early on in the story.

And in the end, that is what makes this book work for me despite all the aforementioned flaws: character. It is especially interesting to compare Helen with Elizabeth, the heroine of A Chance Encounter, who also plays a signficant role in this book. Where Elizabeth was mature, self-contained, socially adept, wry and observant, Helen is much younger, idealistic and dreamy, sometimes given to forgetting her surroundings, often socially inept, passionate and occasionally prone to misjudging others.

Had Helen been a few years older, I would have been less forgiving of some of her bad decisions, but her youth and her painful experience of first love made it possible for me to understand her and in some parts of the story, even to empathize deeply.

William is more mature, but he too has a kind of innocence that, combined with his focus on his loss of Elizabeth, leads him to make some serious mistakes. I would strongly recommend reading A Chance Encounter first, since I think without reading that book, one of William’s choices would be harder to understand and sympathize with. Nevertheless, I loved the way you portrayed William’s confusion over his feelings for both Elizabeth and Helen, and later, his determination to make up for his errors. I also enjoyed seeing Robert and Elizabeth again.

Finally, this is not a book about two idealized characters, but rather, about real people with real blind spots and weaknesses, people who have to go through some growing pains before they can resolve their problems. Like many of your books, The Wood Nymph requires tolerance on the reader’s part. In the end, I was left with some doubts about Helen’s maturity, but I felt that she and William suited each other well and that I could envision them continuing their growth together. B- for The Wood Nymph.