REVIEW: A Most Lamentable Comedy by Janet Mullany 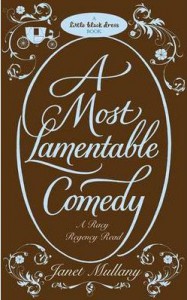 Having recently read and very much liked your book Improper Relations , I was eager to pick up this other book of yours that I had in my tbr pile. A Most Lamentable Comedy is apparently related to one of your earlier books that I have not yet read, The Rules of Gentility.

We meet Lady Caroline Elmhurst and Nicholas Congrevance in successive scenes (A Most Lamentable Comedy , like Improper Relations, is told in the first person from alternating POVs; it’s a device that I really like) and in somewhat similar circumstances: Caroline is fleeing an inn, via the window, in an attempt to outrun her creditors (who are at that moment literally banging on her door), while Nicholas is being unceremoniously dumped in a canal in Venice by the servants of his latest lover’s outraged husband.

I loved Caroline immediately; her callous attitude towards her maid in the opening scene (“If my hands were not full of my worldly goods, I swear I would box her ears”) endeared her to me completely. She was such a refreshing change from the heroine-who-wants-to-be-best-friends-with-her-maid-and-thus-prove-her-democratic-virtue-to-the-reader. Caroline has been twice-widowed – first by a rich older husband and then by a younger one whom she loved but could not hold onto.

Nicholas and Caroline meet up while traveling to a houseparty at Lord and Lady Otterwell’s; Nicholas is back in England for the first time in years, and has to reintroduce himself to his hosts under his real name, having met them on the continent using one of the various aliases he employed to seduce rich women. (Lady Otterwell was under the impression that he was some sort of spy, which led to what I took to be a sly in-joke about the supposed prevalence of English spies running around France.)

Caroline is at the houseparty because she literally has no where else to go – she is broke, friendless, beset by debt, and if she doesn’t find someone – a husband or a protector – soon, she’ll be forced to go live with her sister, a fate apparently worse than death.

No sooner do the two arrive than complications appear; Caroline runs into her ex-lover and his wife (apparently the hero and heroine of The Rules of Gentility), who are there along with another ex-lover of his, Miss Fanny Gibbons, and the two children he has by each woman. Neither woman (nor the lecherous host’s wife) are fans of Caroline, and she immediately feels the force of feminine hostility directed towards her. Having so many enemies present is not going to help her in her quest to appear respectable enough to catch a wealthy husband.

At the houseparty, the guests are drafted to participate in a production of A Midsummer Night’s Dream; Caroline is to play Hermia and Nicholas is her lover Lysander. Having actually just read AMND myself for this first time this past summer, I appreciated the neat way that the plot of the play was intertwined into AMLC, with the multiple sets of lovers (Caroline and Nicholas’ servants also fall in love, and there is a fitful romance between Fanny Gibbons and Otterwell’s secretary) and the play within the larger story (the title of AMLC, of course, comes from the execrable play performed in AMND, The Most Lamentable Comedy and Most Cruel Death of Pyramus and Thisbe).

Nicholas and Caroline each set their sights on the other as potential marks – of course, each is under the extremely mistaken impression that the other has money. Nicholas has stayed away from England for a good long time, and his backstory is left rather mysterious until late in the book. When the story of his past does unfold, it’s rather satisfying and goes a long way to illuminating his character.

Nicholas and Caroline are two of a kind, and I really liked that – instead of the virtuous heroine redeeming the rake hero or the noble hero saving the forlorn heroine, we have two people who both have not behaved entirely honorably in the past; each is at a crossroads and must decide whether to continue on the paths they’ve been on or try something different. Nicholas and Caroline don’t save each other; they save themselves, and in doing so become worthy of each other.

Even before reforming their ways, Nicholas and Caroline show signs of humanity in small ways that feel more sincere and real precisely because they are small – he is overcome with emotion hearing Fanny Gibbons sing one night, and is embarrassed by it; she shows concern for a footman sweating in his wig during a hot afternoon picnic (and she’s embarrassed by it).

Among other delights, I love the consummation scene, which is one of those rare ones that is…less than satisfactory, at least for Caroline. I loved the acknowledgment that attraction does not always lead to instantaneous perfect sex.

The story flagged just a bit for me in the middle; the lightness of the conflict didn’t quite satisfy my need for angst in a romance. Also, the hero makes one of those tiresome “reject her for her own good” moves, which I thought was a trope unworthy of the originality of the book. But the writing and characterization were always enough to hold my attention, along with a generous dose of humor (Ms. Mullany, the fact that you are the only humorous romance author I read regularly does not   lessen the fact that you are damn funny).

My grade for A Most Lamentable Comedy is A-. Now, off to find a copy of The Rules of Gentility!

| Book excerpt | Book Depository. | There appears to be no ebook version.