REVIEW: Understatement of the Year by Sarina Bowen 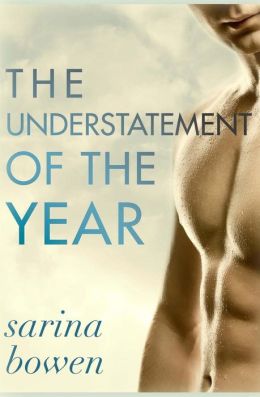 I’m not a big m/m reader but after devouring The Year We Hid Away and the The Year We Fell Down, I had to read the third book in the series. This is the story of John Rikker, the only “out” Division 1 hockey player, and the first love of his life, Michael Graham.

Rikker gets outed at his private Catholic college and is kicked off his team. Harkness College offers him a scholarship and Rikker accepts. He’s completely unprepared for the rush of feelings he has when he sees Graham.

The sound of him was like being scraped raw. The rough quality of his voice turned me inside out with memories. Both good and bad.

Graham and Rikker are both intriguing characters but Graham carries the emotional notes of the book. His agony with his sexual identity is keen. He sleeps around, a lot, but particularly with his friend Becca. He wants to not be attracted to men but he is. I said on a podcast that he’s so far in the closet he’s in Narnia. (Then John, our former blogger who was on the podcast, said that it was a good name for a gay club but it would be called The Wardrobe instead).

Graham is miserable. He’s ashamed of his desires. He’s eaten up with guilt over how he ran away from an injured Rikker when they were attacked as teens. His self loathing is part of what makes it easier to forgive him for the sometimes shitty behavior he exhibits toward Rikker.

It’s not like Rikker’s life is all roses. His parents have shunned him so he went to live with his grandmother who is now ailing. He’s at a new college and a new team and not everyone there is okay with his sexual identity. He deals with his unwanted celebrity status, locker room pettiness, but is often surprised at the level of support he encounters. His complete acceptance of his own sexuality is in direct contrast with that of Graham’s. I particularly enjoyed seeing Rikker return home, meet up with his ex-boyfriend and basically enjoy being a college student without the added pressure of being a symbol for others.

Everything I love about New Adult is in this book. The college experience, the parties, the furtive dorm room sex, and the discovery of self. Rikker understands and accepts himself whereas Graham does not. Because of that Graham’s in near constant emotional turmoil. For Rikker, his emotional angst comes from being near Graham and not being able to have him.

They were friends as teens and then lovers, discovering sex for the first time together. While Rikker has had at least one other boyfriend, Graham really does it for him and Graham’s hot and cold behavior is confusing, arousing, and maddening.

There’s enough hockey to please the sports fan but not so much that it will turn off those who don’t have the first clue about hockey. It’s just a heartfelt, emotional romance that happens to center around two young men that, as a reader, I found it impossible not to care about.

Characters from previous books appear but are not intrusive. There’s a solid cast of secondary characters including one of my favorite– Bella. She plays the beard but doesn’t even know it. She has her own problems and worse, she’s half in love with Graham who sleeps with her but is in love with a man. She needs her own book stat. B+