Warning: mysqli_query(): (22032/3141): Invalid JSON text in argument 1 to function json_contains: "Invalid value." at position 0. in /home/customer/www/dearauthor.com/public_html/wp-includes/class-wpdb.php on line 2187
 REVIEW: The Wind and the Sea by Marsha Canham
April 4, 2011

REVIEW: The Wind and the Sea by Marsha Canham

When I started reading romances again and discovered your books “The Wind and the Sea” was like the Canham Holy Grail. Long OOP, copies were prized and VHTF. I remember finding mine in a USB and fighting to stay casual as I took my purchases to the cashier – kind of like buying out the cough and cold section of the store to camouflage the box of condoms you don’t want the cashier to notice. “Just let me pay for it and get out of the store before anyone notices that I’ve got a book in my hands that they could sell for a mint on Ebay. Act natural. Act cool.” Then after I paid the half price they were asking for it – the fools! the fools! They didn’t even know what they had!! – I cackled with glee all the way home. 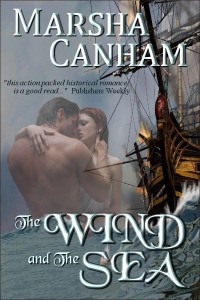 Ah, those were the days. Now of course, you’ve taken steps to reissue it in ebook form and I can only say how happy I am that lots of people will get to more easily purchase it and enjoy it.
I knew I’d need to block off a lot of time for a reread since this is an old fashioned, meaty, in depth length book. Surprisingly though I read it quite quickly despite its length. It all just sort of flowed. But I realized that despite loving it the first time, a lot of the details had gotten hazy as there’ve been many, many books I’ve read since then – so rediscovering it was a treat as well.

Courtney Farrow is the daughter of Duncan Farrow, one of the most notorious and feared pirates on the Barbary Coast. After his death at the hands of the fledgling American Navy, the remaining pirates are attacked on their island outpost and defeated. Along with the few remaining prisoners, Courtney is taken aboard The Eagle and eventually winds up as the cabin boy of Lt. Adrian Ballentine who has recognized who she is and is attempting to spare her from the sadistic captain of the ship. Despite being a woman, she can fight, curse and think better than most men and along with a few other pirates, is convinced that someone among the brethren sold them out.

Meanwhile, Adrian is himself convinced that there is a traitor among the Americans. But who could it be? The idiot second Lieutenant or perhaps the monster of a captain – both of whom do little to keep The Eagle from falling into the hands of survivors of the initial attack against the pirates. As the tables turn and turn again, which side will end up the victors and who will be left to either hang from the yardarm or be sent to the bottom of the sea? It’s romance. It’s history. And it’s packed full of swashbuckling!

Given the style from 25 years ago, I know there will be lots of “new to it” readers who won’t care for the less savory aspects of the book. In the first part it’s the American Navy vs the pirates and sometimes it’s hard to tell the difference. The American Captain Jennings and the 2nd Lt are both asses and allow the men to “enjoy” themselves with the captured pirates’ women. As well, if the 5 worst captains in Naval history were put together, Jennings would make the lot of them look good. Descriptions of life on board and the treatment of the prisoners before the breakout are detailed enough to make me squirm yet not quite to the nausea level.

Forced seduction rears its ugly head here – at least I’d put it in my forced seduction category though I realize that for readers – YMMV. Adrian is drunk – albeit for a good cause – and kisses Court into a feverish passion before they get down to business – which the next morning he has little accurate recall of. I can see some readers remembering and loving this and some being appalled. Good for Court that she explodes into several orgasms to make up for losing her virginity to a man who doesn’t quite remember what happened. But you do make Adrian suffer oceans of guilt over what he *thinks* – and is told – happened before the truth, in the end, does come out. Still, these scenes show the difference between then and now.

Ten years ago, I wanted to slap Courtney for the first 100-150 pages of the book. Obnoxious didn’t begin to cover my feelings about her. This time, I tried to see things from her POV. Yes, she’s still “in your face” but I can sympathize with her – she’s just watched most of the people she’s lived with for 10 years be killed and the rest are now being held in brutal conditions, her relatives are dead, she’s a young woman on an enemy warship and she’s got to maintain her brave front for her own sake to keep from breaking down. She’s reliving the earlier loss of her whole way of life when torn from her mother in France and she has the fierce commitment to help her father’s men that comes from her position and sense of honor. Her parents defied the people who were against them and she is her parents’ daughter. This time through, I enjoyed seeing Adrian vs Court. Watching them take turns getting the best of each other, getting each other’s goat and taking turns being the top dog – so to speak. There’s no way that either of them would be satisfied by a wimpy spouse. They’d be bored to death in a month. In them you’ve created two people who will likely still be striking sparks, yet totally in love, when they’re in wheelchairs.

If there’s one thing I know I’ll get from you – at least in the pirate books – it’s swashbuckling! Lots and lots of it. Fighting everywhere! Bring it on, I love it. Even during the scene of the pirate ship overtaking the Eagle, I was cheering for more. When the men of the Eagle are lead by Adrian against impossible odds and get what they wanted, I cheered again. The love you have stated you have for Errol Flynn’s movies shines bright and I had a blast reveling in it.

In this book, who’s up and who’s down change again and again. I remembered to never count anyone as down and out until they’d been on the mortuary slab for two days followed by a burial under 10 feet of rock. And even then I’d keep an eye on the grave. The pendulum swings back and forth as if it’s onboard a ship during a hurricane. It makes for ‘edge of the seat’ reading because the side on top in one chapter gets flipped on its collective ass the next. I’ll just bet you had such fun dreaming up and writing all the twists and turns of the story.

The villains here are fairly cut and dried. Revealed early and for what they are, it’s possible to sit back and almost enjoy their evilness. You do make some effort to give the backstory of a few of them but others just are evil and willing to sell anyone out for the price of a cup of coffee. I do have to admire how tenacious some of them are, how greedy and grasping, how like to roaches crawling out after an atomic blast and still looking for the best angle for themselves.

I will admit this time around that the melodrama of the last relationship that’s revealed didn’t move me very much. After watching Courtney fight for what she wants and get most of it, Deborah seems like a wilted piece of broccoli. I know I’m probably being unfair to her given her circumstances and the powerful fathers she was up against but there it is. Those who end up together, definitely suit far better. I also wanted to see more of Duncan in the story. Though I guess Adrian, given the basic similarities in their personalities, is supposed to be his stand in.

The forced seduction and the “oh, please just die already” villains aren’t as much my cuppa tea this time around as before. But I still love the setting of the Barbary Coast and the inclusion of the politics of the age. I have more sympathy for Courtney yet still enjoyed watching her vs Adrian as they duked it out. As always, the swashbuckling thrills me and in my mind, I can’t help but set it to the music of Erich Korngold. Let me say thank you for bringing this classic back to a new audience and for offering Dear Author a chance to review it. A-

Lova ya, and I really mean it.