After enjoying your last Harlequin Intrigue book, “Silent Night Stakeout,” I made a beeline to this one. I didn’t care for this book as much as that one but I did like it enough to keep me looking at what you produce next. 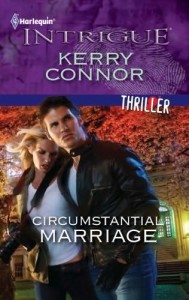 Audrey Ellison is shocked when she arrives home late one evening and discovers someone in her apartment. The shock turns to terror when she realizes the intruder means to kill her. Acting quickly, she escapes into the night but now where does she go? From what the killer said, she realizes this has something to do with a biographical book her uncle has been working on and that there must be an explosive secret about the man the book is about – who also just happens to be days from announcing his candidacy for president of the United States.

Audrey races to her uncle’s house only to find it a smoldering crime scene. With no other options, she decides to seek out the man her uncle mentored for years. But reporter Jason Stone has been a recluse since his wife and daughters died from a car bomb meant to silence a story he was working on. And once Audrey finds him, she discovers a man who doesn’t care if he lives or dies.

Audrey cares about her life though and manages to kick start Jason’s sense of responsibility to the truth. Whatever someone is willing to kill to cover up must lie in the hometown of the candidate so Audrey and Jason head there, posing as newlyweds. But will they be able to untangle the scandals and secrets of the past before the killer tracks them down and silences them for good?

I love a heroine who thinks on her feet. Once Audrey’s involved, she doesn’t get hysterical but logically works the problem as does Jason. In him, you’ve created quite the angsty hero but you’ve also given him a real reason for being a tortured soul. The dive bar that Audrey finds Jason in fits his angstyness to a T. I can practically feel my feet sticking to the floor. The background of both characters as investigative reporters helps the believability of how they react to the situation and decide to proceed by solving it themselves rather than risk police involvement.

I figured out whole plot by clues you include but they’re discreet and a reader has to see then connect the dots to solve it. The final decision not to reveal the whole truth is a gulper but ultimately makes sense considering all involved. The nastiness behind politics never stops does it? However I do wonder how no one had discovered the truth before or if the parties could have maintained the fiction once the presidential declaration was made. At that point the candidates are under a white hot spotlight and if Audrey and Jason figure out the truth once they start, it seems like others could have done the same. Plus though the assassin is good, so many fires and burning buildings all together? Really now. The trail of bodies would have been discovered.

The balancing act in a romantic suspense book is a tough one and here it didn’t work so well for me. The emphasis for most of the book is on the suspense and the romance is forced into a tight corner. Yes, there’s some “mentally sizing each other up” but the end result is insta love from sex in the face of a future life or death situation.

Both Audrey and Jason have past issues that need resolution before they’re ready for future commitments. The scene when Jason finally allows himself to go back and remember the good times with his wife and daughters works for me. He needed this. But when Audrey learns the truth about her uncle’s feelings for her it was too much of a neat resolution of a years old problem in short a space of time for me.

Because of the fact that less emphasis was placed on the romance, the fact that the story ends with a HFN and a potential of HEA scores points with me. Another plus is the fact that the villain is and stays villainous throughout but with no foaming and scenery chewing. And while the secret relies a lot on people having kept their mouths shut over the years, it isn’t too far fetched and the resolution of it doesn’t come from nowhere. While I wish the story had read to me as more balanced, I still enjoyed it. C+

→ Jayne
Previous article: REVIEW: Caught on Camera by Meg Maguire
Next Post: REVIEW: The Secret of the Midnight Tunnel by Angie Frazier