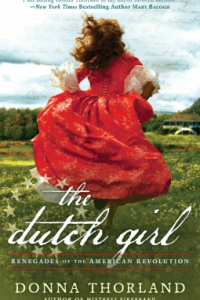 Manhattan and the Hudson River Valley, 1778. The British control Manhattan, the Rebels hold West Point, and the Dutch patroons reign in feudal splendor over their vast Hudson River Valley estates. But the roads are ruled by highwaymen. Gerrit Van Haren, the dispossessed heir of Harenwyck, is determined to reclaim his inheritance from his decadent brother, Andries, even if that means turning outlaw and joining forces with the invading British. Until, that is, he waylays the carriage of beautiful young finishing school teacher Anna Winters…

Anna is a committed Rebel with a secret past and a dangerous mission to secure the Hudson Highlands for the Americans. Years ago, she was Annatje, the daughter of a tenant farmer who led an uprising against the corrupt landlords and paid with his life. Since then, Anna has vowed to see the patroon system swept aside along with British rule. But at Harenwyck she discovers that politics and virtue do not always align as she expects…and she must choose between two men with a shared past and conflicting visions of the future.

Usually I start my reviews of your books by saying something like “here’s a unique look at the Revolutionary War” but this time I’ve actually read another book that this one calls to mind. Years ago I read and did a review on Juliet Waldron’s “Independent Heart” (now retitled “Angel’s Flight). But contrarily, this only made me more interested in seeing what you’d do with this slice of Revolutionary history, rather than less.

Anna is a woman with a past – a violent past that changed the path of her life. Now she’s moved forward, or so she thinks until one day when an American spy arrives in her life and – ahem – persuades her to take on a mission which could change the course of the war. It is not without risk to Anna. Above and beyond the danger from the British, Anna faces death for actions that resulted from her father efforts years ago to effect an overthrow of the Dutch patroons who keep their tenant farmers in economic bondage.

Anna once escaped certain death. Now she’s been placed in the frying pan but soon she’s jostled out of it and into the fire. Then bellows are applied to fan that even hotter. Forced to return to her past, menaced by a mad, bad British officer and then abducted by highwaymen, things just keep getting worse.

Whom can she trust? Her heart might incline her in one direction but can she count on the way Gerrit was 10 years ago as an indication of the man he is now? And what about his brother? She’s heard things about Andries but from those who might not either know him or who obviously have a vested interest in prejudicing her against him. The man himself is at times as much a mystery as Gerrit’s true self and judging incorrectly will get Anna killed.

Anna has made a life for herself in teaching the daughters of the wealthy the mindless female accomplishments that are seen as desirable to go along with a nice dowry. She has also included some more advanced topics even if only because they interest her but Anna is well aware that she’s unusual. Too bad that some good advice to one incorrigible young woman has given a certain British Colonel ideas about Anna’s availability. As happened to Jennifer from “Mistress Firebrand,”, some men will always view a woman who strays outside the norm and who sells skills as an indication that she also sells herself.

Conflict is rife here. Americans v British. Brother v brother. Tenant farmers who lost their leases v Anna and her father who lead them in rebellion against the patroon and the relatives of the man she killed are still hot for her blood. There are fascinating discussions between characters about politics, rebellion, and even estate management. Seriously, I’m not making that last one up. Just how far do the Americans want to see “freedom” and “voting rights” extended. How much land should one man own and how should wealth be divided? Can the different colonies ever think collectively or are their interests too varied, their temperaments too different?

One delight is following the path of Scrappy, a kitten Gerrit saves. Oh no, this has nothing to do with the fact that I have a gray, female cat with gold eyes. Nope, not a thing. Being kind to animals does serve as a barometer of someone’s innate goodness though and both Gerrit and Andries wins gold stars in this category.

Another great part of the story is the reunion between Gerrit and Anna. They immediately resume debating – flirting! – over democratic and political ideals. He knows she’s the woman for him and now that he’s found her and has a second chance at the love he thought he’d lost, he’s not going to let anything stand in his way.

But there are ties and bonds and cross purposes here that would baffle King Solomon as he tried to make the best choice. Whatever Anna does might cost someone she loves dearly. And if she does nothing, she will be exposed as a murderess – either the real or the fabricated one. The worst thing is that she can see both sides and understands why each brother is doing what he thinks is best. From bitter experience, she fears Gerrit will die for his altruism and ideals.

The resolution is one that only Anna could craft and it involves lancing one of the many black secrets that have poisoned Harenwyck. The end is fraught with danger but at the same time, a little anticlimactic. A certain British character played a hand but mainly off screen while I kept thinking another would reappear when he didn’t. The people with a decade long grudge were dealt with all too easily I thought and I would have liked a bit more said and settled between Gerrit and his brother about their father’s will situation.

But when I get a lovely bit like this, I can forgive a lot.

Annatje stood up on tiptoe— she was back to wearing her boring shoes and he missed her clomping klompen—and kissed him on the mouth.

“You are the boy who taught me to read a map,” she said, “now become a man. Mine. You are my compass and my North Star, and I swear to you, Gerrit Van Haren, I will always find my way back to you.”

He watched her ride off into the night beside Pieter with a feeling of sudden elation. She was going to be his wife. He was going to have a real wife. A partner, a help-meet, someone who would inspire him to be his best self.

So yes, I had a good time reading this. Any romance book that can get me thinking of land rights, politics, and women’s education plus deliver on a lovely HEA – the yearly gift from Gerrit to his beloved wife is boss – and has a kitten in it gets an A-

→ Jayne
Previous article: New Releases, Week of March 1, 2016
Next Post: DAILY DEALS: Contemporary, YA, One of my faves, and a historical