REVIEW: The Turncoat (Renegades of the Revolution) by Donna Thorland

“In the year of 1777 in rural Pennsylvania, Quaker Kate Grey is powerfully drawn to British officer Peter Tremayne. But when Kate’s “Aunt Angela”, a master spy posing as a Quaker, steals his military documents, he is disgraced and run out of town. With the support of Peter’s dissolute cousin, Colonel Bayard, Peter returns to Philadelphia to apprehend the women who betrayed him, Angela Ferrers. But when he arrives in town, much to his dismay, he realizes that the love of his life Kate Grey has a new fiancé, and is working undercover for the Rebel cause. If captured, she will be tortured and executed.

Fighting for their love and their life, Peter and Kate are caught between duty and desire…pursuing their military objectives even as they refuse to expose each other. But they can’t hide the truth forever.”

I began to hear about this book last November when DA received a request to read and review it. Since then there has been a steady build up of notice to its release. I was immediately interested since I adore Georgian/18th century books and haven’t read one about the American Revolution in ages. Still as I finished up some other books also due out in March and got closer to starting it, I got nervous. What if the crescendo lead to a dud? I always want to like the books I read but due to the setting I truly wanted to be able to give this one a green light and then cross my fingers that authors will get enthused about the era as well. 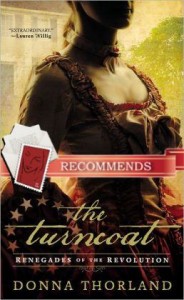 The book fires off to a quick start that sets the scene – rural Pennsylvania at the home of Kate’s father as they gather supplies for the American cause – which is followed in rapid succession by the introduction or description of most of the important characters we’ll be dealing with as well as a stomach churning look the stakes at hand. You don’t flinch at portraying the uglier side of war in the raid that the women witness or what Angela Ferrers is capable of pulling off in one night. It’s no wonder her character is so eagerly sought by the British as she can flirt, gather information, ride like the wind and take out two British dragoons while shooting backwards at a full gallop. Since Angela’s actions have implicated Kate, and Kate is rapidly proving to be much more than a simple country Quaker girl, I wasn’t surprised that Kate becomes Angela’s newest protegee though the speed at which plain Kate is transformed into dashing “Lydia” and snags a British officer fiance is astounding.

Still since it’s party hardy time in Philadelphia with the Loyalists and British whooping it up over the winter fighting break, the transition is more believable now then it then if it took place later in the war. It’s also the best place for gathering intelligence which Kate becomes quite good at. I would love to have spent more time among the network of spies but realize that with all the other threads of the plot to deal with this would have been problematic. Quaker raised Kate’s wrestling with her conscience over the ultimate use of her information does make sense though I would have bet that no-nonsense Angela might have toughened Kate up had she the time. Somehow I had an image of John Andre as being far more the gentleman spy but this portrayal has altered that and I now will see him as a nasty piece of work, especially given the outcome of the various pies he had a finger in. I had read books with American female spies dying (Shadow Patriots) but the (implied) torture scene was a hard look at the fate some probably endured before death. The re imagining of the motivation behind Elizabeth Loring and her husband’s actions are thought provoking though I’m not sure if I can buy into it especially as there is no evidence to support it.

The romantic relationship between Peter and Kate isn’t cookie cutter from the start. Yeah for a man who is excited and enthused because of the heroine’s intellect. I kinda like the fact that once Kate’s argumentative skills have caught his attention, his initial intent is willing seduction, pure and simple and that Kate discovers within herself the desire to be seduced. After all, why shouldn’t she have sexual desires and want to have them fulfilled? I imagine some readers might balk at the fact that it’s another man who actually begins her introduction to pleasure but then the relationship between Kate, Peter and his cousin Bayard over the course of the novel is intricately twined and twisted to say the least. With each new repulsive revelation in their family tree, Bayard’s character got worse until his brutal conduct was almost a foregone conclusion. The final ‘nail in the coffin’ of the blackness of his character disappointed me – really, BDSM to show this, the non-consensual sex isn’t enough? I do like that when Kate turns Peter’s initial proposal down, it’s not from some misplaced “I will only agree to Twue Love” nonsense. And that the two had already sexed each other up before that.

When the British stay in Philadelphia ends and it’s only 1778, I was curious about how and at what historical point the book would end. The way you move and position Kate and Peter for the remainder of the war is clever and the way they’re brought back together is harrowing and horrible to witness, to say the least. Kate finally redeems some of the earlier mistakes in her spying career – honestly, I could almost feel Angela throwing up her hands in frustration at times – and how they arrive at their final destination is an acceptable way close to Peter’s career as an officer without the worry of further British retaliation.

There’s a darkness to the story as well as a more believable sexuality than the usual “hop in a bed with a complete stranger.” Kate isn’t looking to protect her virginity for marriage so her willingness to experiment and be pleased works better for me than the trite excuses used in a lot of romance books. I think this also fits in with the more casual attitudes of the period about premarital sex. This is a book about war and the spies working to further the cause of both sides so I appreciate that punches weren’t pulled. Horrible things happen even early in the story but this also means Kate is well aware of the dangers she and Angela face. There were times when I wanted to shake Kate into being a more ruthless and efficient operative but to her credit, she hadn’t been at it as long as Angela and she did as much as her conscience would allow. It was a time that tried mens’ souls – on both sides – I think. B