Disclosure: Back in the days when pterodactyls soared across the skies (about a dozen years ago or so) I took a couple of eight week novel writing classes with Patricia Ryan. She was a wonderful teacher, and I learned a lot from those classes. Aside from those two courses, and a one day writing workshop she gave which I attended six years later, I’ve had almost no contact with her, which is why I feel I can review Still Life with Murder. I don’t think there’s much of a conflict of interest, otherwise I would not review the book, but I’m disclosing this connection so that readers can decide for themselves. — Janine

I had greatly enjoyed your medieval romances, and hold fond memories of Heaven's Fire and Silken Threads especially, so when Still Life with Murder came out back in 2003 I snapped it up. I was glad to discover that your first foray into the mystery genre was a compelling page turner. 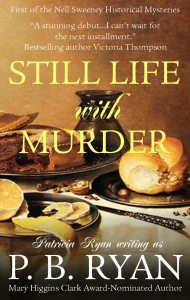 Recently, I heard from Keishon and Jane that you are selling both your Patricia Ryan medieval romances and your P.B. Ryan mysteries on Smashwords for a bargain price. At Jane’s request I dug up a post I wrote for a Yahoo group I belong to at the time I first read the book, and reconstituted that post into this review.

Still Life with Murder takes place in Massachusetts in the 1860s. The book opens in 1864 when its heroine, Nell Sweeney, is assisting Dr. Cyrus Greaves who has been called to deliver a housemaid’s child at a Cape Cod mansion that belongs to the wealthy Hewitt family. But there is trouble; the baby is lying transverse, and the doctor needs to perform a caesarian.

Soon after the operation is complete, it becomes apparent that Annie, the housemaid, doesn’t want the child. Her husband is away at war, and not the child’s father. Meanwhile, Viola Hewitt, the matriarch of the WASPy, Brahmin Hewitt family, has recently learned that the eldest two of her four sons, both Union soldiers, died in Andersonville of dysentery.

The grieving, wheelchair-bound Viola now wants to adopt the little baby girl Annie is determined to abandon, and after seeing Nell hold the baby lovingly in her arms, she offers Nell the position of little baby Grace’s governess. Nell, who is Irish, has just enough education to be a nursery governess. She’ll have eight years to learn what she needs to know to become a preparatory governess, Viola insists. Nell tries to tell Viola that she may be harboring illusions about Nell, but Viola replies that “Gentlewomen have no monopoly on virtue.”

Nell is thrilled not just at the opportunity to better her circumstances, but even more at the chance to have a baby to hold and love and raise almost as her own. It is something she thought could never happen, so she eagerly accepts the position with the Hewitts.

Four years pass, and in 1868 the Civil War is over and the Gilded Age is in full swing in Boston. Grace is now three and a half and known as Gracie, and Nell loves her dearly. She would do nothing to jeopardize her position as the Hewitts’ governess; nothing that is, until Viola Hewitt’s oldest son, one of the two Viola believed had died in Andersonville, turns out to be alive and in prison for a murder Viola is convinced he could not have committed.

August Hewitt, the patriarch of the family, is furious at William Hewitt for not telling his family he was alive for four whole years. He refuses to aid his son and is willing for him to hang. Therefore Viola has to go behind her husband’s back, and the only one she can turn to is Nell. And Nell suddenly finds herself thrust back into the world of thieves, prostitutes and cardsharps, a world with which she was once all-too-familiar. Now she must hide that familiarity so as not to lose her position with the Hewitts and along with it, Gracie.

This recap covers only the beginning of this rich, well-crafted mystery. I sometimes find mysteries too cerebral and not as emotionally involving as I would like them to be, but reading this book I wasn’t bored for a minute, because at the same time Nell is investigating clues, she is also learning more about what kind of men William Hewitt and Detective Colin Cook of the police department are, while they (and the reader along with them) are learning more about Nell and her past. Since this is the first in a six book series, not everything about Nell’s past is revealed, but the reader's appetite for more is whetted.

The attraction between Nell and Will, a doctor who became addicted to opium after it was medically administered to him in Andersonville, is palpable. But there are many barriers in the way of their association, not least of which are that to remain Gracie’s governess, Nell has to keep her reputation spotless, and that her employers prefer that she not marry.

While there is a lot of character and relationship development in this novel, I would have liked a bit more, because I enjoyed what I learned about Nell and Will very much. Nell is a true survivor, someone with a lot of strength and determination. These qualities allow her to get to the bottom of the truth as well as to surmount numerous obstacles. Will is perhaps more vulnerable, but like Nell, he has endured a lot in his life. If the two of them are scarred by their pasts, neither one wears it on his or her sleeve nor complains about it.

I liked the wealth of details about Boston in the 1860s, and found the description of the opium dens particularly fascinating. Although I don't know much about the setting, the book felt authentic to me.

Some of my friends refrain from reading mysteries for fear of violence and gore, so I want to assure readers that in this book, only a few details are given about the corpse, and these are not gratituous — that is, they are strictly there to identify clues like whether there was a struggle, whether the dead man was still alive when so-and-so saw something, etc.

Still Life with Murder was thoroughly enjoyable and engrossing. Many of the historical romances published when I read this book, back in 2003, were lighter in tone and set in England, so although this was a mystery rather than a romance, the difference from my usual reading was welcome. I suspect the book would hold up well and be just as entertaining today. A- for Still Life with Murder.