REVIEW: Everything Changes by Megan Hart

The plot of this Spice Brief deals with the same events described in your full-length novel, Tempted, which Jennie and I reviewed here. But whereas Tempted was narrated in first person from the POV of Anne Kinney, a married woman in her late twenties, “Everything Changes” is told in third person and its viewpoint character and protagonist is Alex Kennedy, the man who tempts Anne toward a new direction. 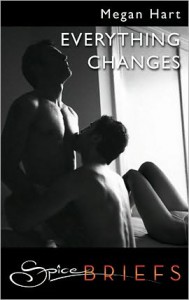 If this sounds like a simple story, it isn't. There are complex relationships at the center of both Tempted and “Everything Changes.” Yes, Alex is greatly attracted to the married Anne and yes, Jamie, Anne's husband, is Alex's best friend. But Alex is also greatly attracted to Jamie, a boyhood friend whom he has never been able to keep from loving. And it is Jamie who invites Alex into his and Anne's marriage bed.

As in Tempted, it is clear that Alex is bisexual. Anne appears to be straight, and Jamie is something of a mystery. Is he bisexual too, or does he only swing that way for Alex? If Alex knows the answer, his thoughts don't make it clear.

“Everything Changes” begins when Alex has lost his company, Transcom, due to an affair with the wife of the head of the conglomerate which purchased Transcom out from under Alex. Feeling at loose ends despite the million dollars he attained from the buyout, Alex leaves Singapore and soon afterward, arrives on his old friend Jamie's doorstep.

Anne answers the door. She is expecting Alex, but what she doesn't expect is her attraction to him. Alex is drawn to Anne from the first, and though he admits to himself that he'd have wanted her just for being Jamie's wife, the pull between them develops into more than that.

And then there is Alex and Jamie's mutual desire, which they mask, deny and fuel by touching each other with causal punches rather than focused ardor. Still, Alex is taken aback when Jamie says he wants the two of them to share Anne.

Alex shot Jamie a glance over his shoulder. “She just met me.”

“I mean she wants to be with two guys at the same time. And you're the only one I-trust.”

There was more to it than that, and they both knew it even as they both neatly skated over it.

Even though he believes no good can come of it, Alex agrees to pleasure Anne. There is one ground rule – no fucking – and a whole lot of pitfalls.

Still, the scenes between Alex and Jamie without Anne present do shine. I wish that Jamie's sexual preferences had been explored a bit more and I feel similarly about the common ground Anne and Alex share (both have alcoholic fathers). The latter is only touched on briefly, and for this reason, I felt that outside of sex, there wasn't enough to support the feelings that developed between Anne and Alex.

“Everything Changes” clocks in at 38 pages on my Sony Reader, a length which is simply too short for such a complicated tale. Consequently, the story feels rushed and underdeveloped, yet I think more lingering would have only made me impatient with the scenes that had already been portrayed in Tempted.