REVIEW: Not Safe For Work by LA Witt 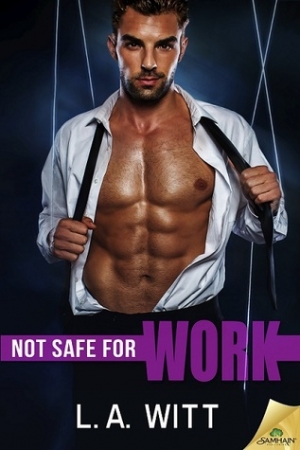 I liked the idea of this book; architectural modeller, Jon McNeill, bored during an endless meeting, checks his kinky hookup app “Leathr” and finds that there is a “match” for him sitting across the table – Rick Pierce, the wealthy CEO of their biggest client.  To add something extra to the mix, Jon is a Dom and Rick is a sub. The power differential one might expect in their situation is flipped and that was something that had me clicking the “want” button.

As it happens, reading this book also coincided with a rare “don’t feel like reading, let’s watch more TV” period. As much as I enjoyed the story – every time I picked it up, I was happy to keep reading until bedtime – it was also a story I didn’t feel compelled to pick up over an episode of Law & Order: SVU or Friends.  I’m sure my reading mood played a part but I think there must have been something about the book as well, which made me feel that way.

The story is told from the first person POV of Jon. This meant that I didn’t get a great handle on Rick. There was a lot of conversation so he wasn’t a complete cipher but we are firmly in Jon’s head the entire time. Perhaps I’ve been spoilt by dual POVs or third person multi-POV books. Rick is a little too good to be true in many ways. I never saw him mean, unreasonable, snappy or lacking empathy and understanding. Maybe this was a function of how Jon saw him, but even the black moment in the book painted Rick in a good light.

It’s an erotic romance and there is a lot of sex. To be honest, even as I enjoyed reading it, I think the book would have benefited from deleting a couple of them because they didn’t really drive the story anywhere. The other thing I noticed was that Jon and Rick tended to bang on about things over and over again. There was a thing which happened which ended a scene early (it wasn’t bad) and I counted three separate conversations about it which all, essentially said the same thing. I get that this is what happens in real life but it was repetitive to read about.

There were however, many things to like about the book. Both the protagonists are over 40, Jon has been married twice (to a woman – not the same woman!) and has three grown children (they are in college). He’s close with his (first) ex-wife and mother of his kids (in fact, she lives with him because she struck some financial problems after her second divorce) and he’s bisexual. My impression of Jon was that he fell for a person and their gender wasn’t a big factor – in that respect, my feeling was that he will happily be monogamous with Rick for the rest of their lives. I didn’t get the impression that he was craving sex with a woman and my impression was also, when he was with his first wife (at least), he didn’t crave sex with a man either. Sometimes bisexuals can be portrayed in fiction as being twice as likely to cheat and I liked that it was addressed here in subtle but compelling ways.  I thought Rick was probably gay, but it wasn’t made explicit in the story. In any event, he never had any issue with Jon’s bisexuality and I liked that too.

Jon, because of his wife’s financial issues, has taken on the sole cost of putting his three children through college. When two are looking at grad school in the next couple of years, the pressure ratchets up. Making 1:10 scale architectural models, as opposed to Computer Aided Design/ 3D Graphics, is a bit of a dying art. Jon feels somewhat trapped where he currently works if he wants to stay in the same town (which he does) and keep his promise to his children to put them through college so they won’t be saddled with debt upon their graduations (something he’s also very big on).

The conflict therefore, is within the work relationship, not the personal relationship. For the most part, Rick and Jon get along great right from the start. But they have to keep their relationship on the down-low – Jon is not out at work (he comes from the generation where being bi at work could cause serious problems and even though he knows it’s mostly not the same now (at least where he is) he can’t shake it) and, if not for Rick’s business, the firm he works at would fail. This would mean about 100 people would be out of a job, including Jon’s own small crew of drafters and modellers and, of course, Jon himself. Still, when the conflict came, it surprised me. I didn’t find it predictable and the flow on effects were quite profound in interesting ways I enjoyed seeing explored on the page.

The solution included a little deus ex machina I suppose but given who the protagonists were, it was at least partially to be expected I think.

I would have liked perhaps a little more of Jon’s kids to be in the story. They were away at college for most of the action which was convenient but, given how important they were to Jon, I’d have expected a little more contact with them through those parts of the book.

I liked Jon and it was not a hardship to spend time in his head. Rick and Jon make a great couple. Not Safe For Work lacked an element of “I need to read this now” compulsion for me but I still enjoyed it quite a bit.