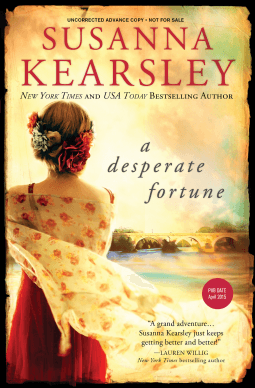 For nearly 300 years, the mysterious journal of Jacobite exile Mary Dundas has lain unread-its secrets safe from prying eyes. Now, amateur codebreaker Sara Thomas has been hired by a once-famous historian to crack the journal’s cipher. But when she arrives in Paris, Sara finds herself besieged by complications from all sides: the journal’s reclusive owner, her charming Parisian neighbor, and Mary, whose journal doesn’t hold the secrets Sara expects. As Mary’s tale grows more and more dire, Sara, too, must carefully choose which turning to take… to find the road that will lead her safely home.

As always, I never quite know what I’ll get when I start one of your books but I trust you enough to just dive in and be sure I’ll be in the deep end instead of the shallow one. Yes, the water metaphor is deliberately chosen as it always seems to me that once I’ve begun reading, it’s as if I’m in a floating world that surrounds me and cuts me off from outside distractions and when I stop for whatever reason, I feel as if I’m surfacing from one world to another.

There are many similarities to “The Firebird.” It’s dual timeline story and the focus of the historical section is on 18th Century Jacobites whereas the present day people are trying to unravel a mystery the first characters left behind. I am just as interested in both sets of characters and the outcome of both the historical journey and the present day sleuthing. I loved the sly nod to a secondary character from “Splendour Falls” as well as “The Firebird.”

The action in both parts centers on two women – historical Mary and modern Sara. Both are a intelligent but a little unsure of themselves for various reasons. Mary is a young woman, sheltered from the world who dreams one day her Jacobite father and brothers will come to claim her. Mary is strong without being anachronistically kickass. She’s got strength of character and purpose and this journey hones her like steel. Her gift with fairy tales is delightful and I must look up the Countess d’Aulnoy. An early feminist giving women a voice and some agency sounds fascinating. Sara has Asperger’s as well as a host of coping mechanisms her older cousin has helped her develop of the years to navigate her condition. Numbers are her source of comfort and stress relief so a diary in a numerical cypher is just her catnip.

Both women have also known loss and rejection. Mary’s mother died and then her father left her with relatives seemingly without a backward glance or any further communication. I can understand in my heart why Mary wants to see him again if only to assure herself that someone besides her aunt, uncle and cousins love her but my head would want to hurl something heavy at him. She and her little dog Frisque have both known loss and abandonment. Sara has difficulty in parsing relationships and other’s emotions and due to bad past experiences, has given every new relationship a Best Use Date after which, for her, it’s over.

Mary’s no fool though even if she is naïve. A female spy is her introduction to this world and the person who helps Mary develop the cypher that has held the secrets of her journey for 300 years. Mary also quickly realizes that she must be on guard about who she trusts in a world where so many lie to her. Meanwhile, Sara is the one who cracked one cypher and earned the trust of both the diary owner and the historian who is salivating at the thought of what might be contained there about the Jacobites. I find myself in agreement with Alistair – the lives of everyday people have much more appeal to me than any royalty.

The two men in their lives, Hugh and Luc are both fantastic though I think Hugh is by far the more interesting of the two. Luc is divine and gorgeous but I never could quite see him as a real person since he has no faults that I could remember. Both are men to turn to in a crisis even if their skill sets are specifically suited to their centuries.

The modern ending for Sara and Luc seemed just a touch fast for me though Luc certainly seemed sure of himself and his feelings for Sara. At least he is in the position to know how to help her in her daily needs and what to do should she have problems. The Alastair + Claudine relationship is ends sweetly though having every couple turn out happy might be stretching it.

Luc’s son Noah becomes more than a mere moppit. He helps Sara with her cyphering and perhaps might turn into one himself one day. Or perhaps something else. He’s a cutey though and his friend Michelle is fierce.

Mary and Hugh’s ending is one of the most moving I’ve read this year. He notices her, really everything about her, stores it up and keeps it until it counts then acts on it. Brava for her for recognizing this. I don’t even miss hearing what he says to her after his – I agree with Mary on this – statement for her to marry him. He’s just that kind of guy and after all he’s been through, I think he knows his own mind and hers too by then. The bridge heard it, the river heard it and she heard it and that’s enough. Mary and Hugh’s relationship is deep and heartfelt and her defense of her “husband’s” privacy to the corsair is as telling a declaration of love and trust as any. I don’t need any sexy times to show me this. She knows he’s the man to love her, care for her and keep her safe – as does the prince in her adjusted fairy tale. After being stuck with others along their journey, yes this moment was theirs alone. Mary brings back what was lost into Hugh’s eyes. I’m glad Frisque didn’t desert her either. And of course Hugh never will. She’s been deserted so many times that it’s also sweet that she reunites with another who cared for her long ago. I hope she went to Spain too.

When Sara mentions the diary stops, I did a double take. No, it can’t end that way. We have to know what happened! Well, the explanation makes total sense as does the possibility that not all of Mary’s writing would have survived together. I enjoyed seeing the second generation of Jacobite exiles and learning about their lives; also seeing King James VIII. Bonnie Prince Idiot usually takes all the limelight in historical books so it’s nice, for a change, to focus on his father and that at least James sounded honorable.

From the notes after the book ended, I can see great care was taken to check facts and fit things together. This shows so much in how smoothly the narrative and details are presented. I never had a “wait a minute” moment requiring me to convince myself that this event could or should have happened. I can tolerate a few of these to make historicals work but too many takes me out of the moment and can DNF a book for me.

As usual, I’m never sure where your book will lead me but this journey – sorry, no pun intended – is worth the ride. I’m going to take Luc’s statement to heart. “Surviving life is not the same as living and enjoying it.” Very French. A-