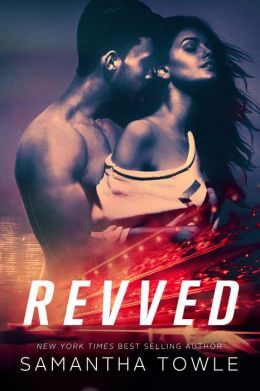 I knew when I saw this book searching for new releases that I would buy it because most of the Towle books I’ve read in the past, I enjoyed (particularly The Mighty Storm). The heroine, Andi, is a mechanic who lost her race car driver father in a horrific on track accident. After her father dies, she and her mother move back to Brazil where she grows up.

Andi never loses her love for fast cars and pursues a mechanical engineering degree and begins to work as a mechanic on a race car crew. Her godfather and family friend, John, heads up the crew of one of the current greatest drivers in the world. After one of the mechanics leaves the crew, Andi gets a job.

Enter Carrick Ryan aka Carr. (As Andi notes, that’s not very original). Carrick is a slut and therein lies my problem with the romance. I didn’t much like Carr. First, the mechanic that Andi replaced left because Carr was screwing around with his wife. The minute that Andi arrives, he stares at her breasts and starts making come ons. Andi feels an immediate and helpless attraction toward him. I wished she didn’t. The first night that Andi goes out with the crew, Carr sleeps with one of the front of the house girls in a threesome and the girl is then fired because if you sleep with Carr while employed by his crew, you’re fired. Carr doesn’t understand this because…I guess he’s a manboy?

There are attempts to make Carr sympathetic such as being good to fans and for the most part being decent to Andi. I say for the most part because he is portrayed as constantly flirting with her. The boss/employee dynamic wasn’t there and I felt like it should be. Carr, as the driver, could have easily have her fired. They were portrayed more like co-workers.

I thought about the reader consent in books thing and because I hadn’t seen enough decency in Carr (because what kind of jerk sleeps with the wife of a person he employs? I guess, King David?), I didn’t understand Andi’s attraction to him initially.

The two profess that they’ll be friends and Andi holds out for a period of time. But two things are an impediment to their relationship. First, she’ll be fired if she sleeps with him and second, she has issues with her dad’s death. As the story progresses, the conflict spotlight shines more heavily on Andi’s inability to commit to Carr. She waffles quite a bit, telling him she can’t be with him and then running back into his arms. It’s actually Andi’s repeated rejection of Carr that turns him from hated manslut into sympathetic hero. At around the 40% point, you do start feeling sorry for Carr.

Andi’s internal struggle to deal with her attraction to Carr and her fear of him dying like her father is prolonged. I wondered if we got more of the mother or had more internal monologue from Andi whether she would have been more understandable. But most of the time spent in Andi’s head was when she was lusting after Carr which made me, the reader, impatient.

The story is told from Andi’s point of view. The prose is very conversational, sometimes breaking that metaphorical third (fourth?) wall.  The racing details were enough that it provided a believable story setting. An insider or real fan of racing may have wanted more but for me, a not very casual fan, it was fine. Interestingly enough, nearly every scene had a song that was identified as if the song was supposed to set the mood for the scene. Being culturally illiterate, I didn’t even know of some of the songs and I was too lazy to google them.

It’s cracky and I think if a reader enjoyed A Mighty Storm, she’d like this one too. The elements are similar but not as compelling as in Mighty Storm. New readers should probably try that one first. C+