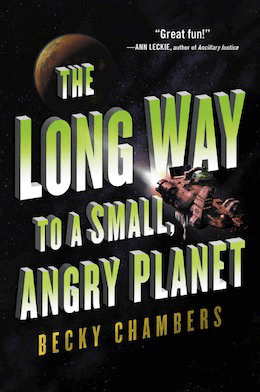 A rollicking space adventure with a lot of heart

When Rosemary Harper joins the crew of the Wayfarer, she isn’t expecting much. The patched-up ship has seen better days, but it offers her everything she could possibly want: a spot to call home, a chance to explore the far-off corners of the galaxy, and some distance from her past.

And nothing could be further from what she’s known than the crew of the Wayfarer.

From Sissix, the exotic reptilian pilot, to Kizzy and Jenks, the chatty engineers who keep the ship running, to the noble captain Ashby, life aboard is chaotic and crazy—exactly what Rosemary wants. That is until the crew is offered the job of a lifetime tunneling wormholes through space to a distant planet. Sure, they’ll earn enough money to live comfortably for years, but risking her life wasn’t part of the job description.

The journey through the galaxy is full of excitement, adventure, and mishaps for the Wayfarer team. And along the way, Rosemary comes to realize that a crew is a family, and that family isn’t necessarily the worst thing in the universe…as long as you actually like them.

Dear Becky Chambers, I saw your book being mentioned on File 770 and couple of commenters seemed to like it so much that they were going to nominate you for next year’s Campbell award. When I did a little more digging it seemed that the book promised a secondary f/f romance between two crew members. And I said, once again, “sign me up” and one clicked it. Sadly, I gave up at about 65% of the book, which I think was more than enough since the whole book is a little over 400 pages long on my Kindle.

I won’t deny that first and foremost my DNF review is a case of unfulfilled expectations, but you see my expectations came from the book being billed as “space opera” by Amazon and the publisher, so it is not like I formed them at random. I do not expect all scifi books to have a lot of action, but with a book which claims to be *space opera* I do expect it. I even went to Wiki and checked their definition to make sure I remembered it correctly.

So, at the place in the story when I said I could not keep reading, the first significant action which was influenced by the war taking place off page, finally happened. And when I say action, I mean that one of the “Wayfarer” crew members helped other ship deactivate some mines installed by somebody else. Don’t get me wrong, that was a lot more excitement than I had experienced throughout previous sixty percent of the book, but it still did not rise nearly to the level of action I usually see in the “space operas”. Before this section I had actually held out hope that something dangerous and exciting was going to occur at around forty percent of the book, and maybe our team would suffer some serious damage. Alas, it was ridiculous, but it actually ended almost peacefully , except their captain suffered a not very serious wound and it was even kind of his fault.

“Did you touch your face at all while you were talking to the Akarak captain? Like you are doing now?”

“Um, yeah, maybe.” Ashby pushed through the fog, trying to remember. “I don’t know, it all happened so fast.”

“Rosemary rubbed her eyes with her palm, as if she had a headache.

Rosemary grimaced. “That explains it. See, this —“ She tucked her thumb back and held her fingers straight and flat, making her hand into a rough imitation of a Harmagian dactylus. She flexed her hand over her eyes, twice.” – is a really offensive thing to Harmagians. And those Akaraks’ gestures and dialect were very Harmagian – influenced.”

Rosemary cleared her throat. “It means you’d rather rub shit in your eyes than keep talking to them.”

I think my first warning sign that the author was trying to subvert the genre was the fact that Captain Ashby did not allow weapons on his ship. Granted they are civilians, they are tunneling wormholes through space and not fighting, but there is still danger in this galaxy, even if the war only rages in only a few areas, from what I could understand. Moreover, when they get this new job of tunneling to the planet on behalf of a species who only recently joined the “Galactic commons” and was considered pretty dangerous, Captain Ashby’s “no weapons” stand became more than a little ridiculous for me.

Maybe I should backtrack, because I started my review with complaints and I can see how other people might find a lot of things to like about it. It is well written, the author makes a sincere attempt to do detailed world-building, and there are very nice, very interesting characters. Heck, *I* really liked the crew of Wayfarer when the author was introducing me to them through Rosemary. I think that in order to avoid obvious information dumping, the author has Rosemary learn about her teammates and their customs (and thank goodness not all of them are human, and the non-human ones do not just look like barely altered humans). And there was a lot and lot of information about their customs and how to treat the other species. A lot.

So, yes, I really liked these guys, until the huge amount of information bored me silly. I love character based stories, I like character studies. And I absolutely welcome well done characters who also participate in awesome adventures. This book fell far short of awesome adventure and I want *space opera* to provide me that. If there was one in the last 35% of the book, I will never know.