JOINT REVIEW: Flight of Magpies (A Charm of Magpies, book 3) by K.J. Charles 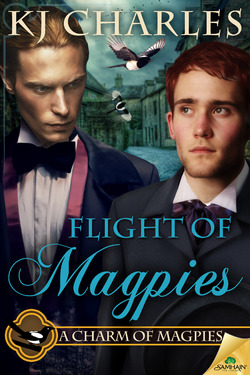 Danger in the air. Lovers on the brink.

A Charm of Magpies, Book 3

With the justiciary understaffed, a series of horrifying occult murders to be investigated, and a young student who is flying—literally—off the rails, magical law enforcer Stephen Day is under increasing stress. And his relationship with his aristocratic lover, Lord Crane, is beginning to feel the strain.

Crane chafes at the restrictions of England’s laws, and there’s a worrying development in the blood-and-sex bond he shares with Stephen. A development that makes a sensible man question if they should be together at all.

When a thief strikes at the heart of Crane’s home, a devastating loss brings his closest relationships into bitter conflict—especially his relationship with Stephen. And as old enemies, new enemies, and unexpected enemies paint the lovers into a corner, the pressure threatens to tear them apart.

Sirius: I still remember when I finished the first book in this series. I sent an email to one of my best friends, whom I met in m/m world, demanding she should read this book and read it now. And I still remember her writing back that the book was the best thing she read that year. And now here we are at book three. I reviewed the first book here and the second book here.

I worry each time a new book  comes out in a series which features the same romance couple as main characters. I worried when the second book came out and was happy to see that my worries were not justified. I worried again before I read this book, and sadly I have to say that some of my worries have come true. While I still love the writing and the characters and mystery/suspense plot (although I’m not sure how whether this one could be called a mystery at all since all but one potential suspects were revealed pretty quickly during the course of the story), I had that annoying feeling during the time Stephen and Lucien quarreled, because they already had been through that in the book one and especially book two and it seemed to me that even if they did not resolve their issues in the previous books, they seemed to come to peace with it at the end of book two.

Kaetrin: I enjoyed the book but I also agree that it was the weakest book of the series. In The Magpie Lord, I was impressed by the novelty of the world – it felt refreshingly different to what was available in the genre. A Case of Possession struck me as beautifully structured, with all the parallels of the personal and the suspense plots and their various twists and turns. Flight of Magpies, in terms of the personal, goes where I thought it would. The remaining tension between Crane and Day was over Stephen’s job. Crane did not want to stay in England and Day’s role as Justiciar kept him there. I knew this was the last book in the series so I expected some resolution there.

As for the magical suspense plot there were some surprises for me and I did think it neatly tied the trilogy together. It may have been my reading mood or it may just have been that this third book had a kind of familiarity to it, but the upshot was that I wasn’t quite as engaged as in the earlier novels.

Sirius: We catch up with Stephen and Lucien during stressful times for both of them, especially for Stephen – his stress from working as a Justiciar has clearly increased and Lucien is thinking again about wanting to leave England with Stephen.

“Not that he had ever wanted to stay in England in the first place. That was all down to Stephen. Crane had promised he wouldn’t leave the country without him, and meant it, but his thoughts had undeniably turned from how he could stay in England to how he could make Stephen leave it”.

Very quickly a situation Stephen has to deal with escalates to the point where one of the members of his team is accused of theft and he has to figure out if the accusations have any merit. Lucien wants them to leave the country together and Stephen thinks that their resources as Justiciars are stretched so thin that he cannot do so any time soon.

Eventually all of this stress and the theft of a certain item from Lucien’s home escalates to an ugly fight. I actually had no problem with the fact that they fought. Stress can make people do that, it happens even between most devoted couples. No, I had a problem with what they fought about, because I thought that they mostly rehashed already resolved issues.

For example I really did think that Lucien was okay with Stephen being utterly devoted to his job even if his superiors do not value him as much as they should. Apparently he is not. I do not like it when the characters regress in their development, but I continued reading, I just pretended that I misinterpreted book two. I thought that Stephen’s propensity to lie when necessary was discovered and accepted by Lucien in book one and I was unpleasantly surprised to see Lucien shocked, *shocked* that Stephen lied to him to protect him.

I was pleased though that the fight and consequences of the fight did not last that long and that both men came to their senses and realized that disagreements or not, they should deal with whatever life throws at them together.

Kaetrin: I don’t think Stephen and Crane had finally resolved their issues about Stephen’s job in the second book. My memory of it was that they had resolved one of the tensions, at least temporarily – that being the sudden influx of power Stephen experiences as a result of the blood and sex bond they shared from the Magpie Lord, and the suspicion of warlockry this brings upon Stephen. Crane had never made a secret of the fact that he wished to leave England. He didn’t want to deal with the hypocrisy and the hiding necessary to fit in with England’s laws. He wanted an open relationship with Stephen – they could have that in China and perhaps other places but not where they were. It made sense to me that the personal aspects of the story revolved around the pair coming to grips with this tension – Stephen’s job or Crane’s wanderlust and, in some ways; in the closet or out of it. Crane wants Stephen to want to leave and he sees that Stephen’s rigid sense of duty is actually doing him harm. He works too hard, for little reward. That all made sense too.

Like you, I did love that even though they fought and had said things they each regretted, they were both still committed to one another and to sorting things out. That showed a maturity in their relationship which I enjoyed.

“Good.” Crane pressed a hard kiss on his lips and pushed him off his lap, in the direction of the kitchen. “Let’s get Merrick. Come on, adai.”

“I am aware that means idiot.” Stephen was trying to sound pointed, but the golden light was returning to his eyes at last, and Crane felt a deep tension finally dissipate at the sight.”

“It’s a term of affection,” he assured his lover, following him to the kitchen. “You are an idiot, of course. But it’s mostly affection.”

For their relationship to work out long term, one of them had to make a fundamental change. And whoever it was, also had to make that change freely and without resentment. On reflection I think the way it was resolved in the story did this very believably.

Sirius: Maybe “resolved” was a poor word choice on my part, because you are right – those issues were not *resolved*. I suppose I thought that Lucien already accepted these issues being part of what Stephen is and what he does, that it would be the part of their relationship, you know?

I don’t know, it felt to me that they already had been through this and it felt to me as if the characters regressed a bit, thankfully for relatively short period of time. I do agree though that Lucien always wanted to leave England and take Stephen with him, I just thought that after book two he accepted that it won’t happen for a long time. Maybe I indeed misinterpreted book two.

I really enjoyed the mystery/suspense plot our heroes had to deal with in this book. It is fun, it is creepy and it brings the unresolved ends from the previous books to a very satisfying conclusion – some uncaught villains get caught and dealt with. There are also some very interesting developments in the magic surrounding Stephen and Lucien. I think these two are such a good team.

Kaetrin: I think the magical suspense plot was a bit weaker for me. I admit I was a little confused at the end with the thing that happens with the ring. I’d have liked a little more exposition. But then, I am a reader that likes things to be spelled out a bit more.

I was a bit surprised at the developments for Merrick and Jenny in this book. They kind of came out of left field for me. What did you think Sirius?

Sirius: I do not have any problems with magical suspense plot. I was a little surprised by what happened with the ring, but only a little bit and I cannot really talk about it unfortunately due to spoilers.

I was surprised about Merrick’s story, sure, but I really liked it. I thought Merrick was just so *him* in that storyline, I loved it.

Kaetrin: I think Jonah Pastern, who is introduced in this book, was an interesting and somewhat morally ambiguous character. His book, Jackdaw, which is out next year,  promises to be really interesting.

Sirius: I cannot wait to read that one myself.

Kaetrin: I liked Flight of Magpies very much but it didn’t have quite the magic (pardon the pun) of the first two books. While it wrapped up the trilogy in many ways, I didn’t feel the series ended with a “bang”. I’m going with a B.

Sirius: I actually did not know that the book was going to be wrapping up the series when I read it for the first time. I read the interview with the author stating that after I finished the book. To be honest with you I was sure that based on the ending at least one more book is planned. I mean I know that there would be guest appearances and she did not rule out novellas, but main series is complete now and the ending did not indicate it for me. I think I agree that it did not end with a bang for me either. B for me as well.