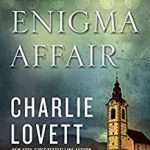 Independent bookstores keeping afloat despite tough retail market – So independent bookstores appear to be on the rise again, almost a decade after the industry “crashed,” with the number of store openings still growing. And despite Amazon’s foray into brick and mortar stores, their impact may not be as overwhelming as some ... more >

JOINT DISCUSSION: For Such a Time by Kate Breslin

ALL THE TRIGGER WARNINGS Janine: I asked Sunita, who read this book in its entirety, to join me for this discussion. As one whose relatives died in Auschwitz, I could only bring myself to read 35% of Breslin’s novel, the first 145 pages. So there are questions I can’t answer, ... more >

REVIEW: A City of Broken Glass by Rebecca Cantrell

Due to the nature of the plots of this series, spoilers in the reviews are unavoidable. Dear Ms. Cantrell, Each summer I eagerly look forward to the newest installment of this series. So far Hannah Vogel has ducked and dodged her way through the increasing tension and rising tide of ... more > REVIEW: A Game of Lies by Rebecca Cantrell

Fair Warning!: Spoilers for the first two books will probably appear in this review. Dear Ms. Cantrell, I look forward to the annual summer release of the latest book in your historical mystery series about Hannah Vogel in pre-WWII Germany. This one doesn’t disappoint. Like the two before it, this ... more >

Dear Ms Gaia, I love books set during WWII. There’s so much scope for drama, heartbreak, courage and bravery. Your book appealed to me because of the setting and the fact that from the blurb, the heroine looked like she is more in charge of her own sexuality than in ... more >