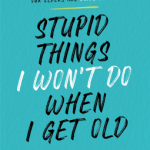 REVIEW: Stupid Things I Won’t Do When I Get Old by Steven Petrow

Soon after his 50th birthday, Petrow began assembling a list of “things I won’t do when I get old”—mostly a catalog of all the things he thought his then 70-something year old parents were doing wrong. That list, which included “You won’t have to shout at me that I’m deaf,” ... more >

O.J. Simpson too toxic for a book deal . . . major publishers say – I know, I know. Just get all the lols out and then check this out. Publishers who, for example, were ready to publish Milo Yiannopoulos, won’t touch O.J. Simpson’s potential manuscript. OMG I cannot even ... more >

Monday News: Ageism and gendered rage, beauty and the male gaze, social media’s danger to women, and the feminization of domestic fiction

The insults of age: A one-woman assault on condescension – After crawling out of the hole I’ve been working in for the past week, I found link to this story on Twitter from Kat (Book Thingo), which led to a long discussion about ageism, cultural privilege, and the limits of ... more >

Thursday News: on the contemplation of women, genre fiction, and life in general

Yet More on Female Characters in Fantasy – Rhiannon Thomas responds to Robin Hobb’s Facebook post on female characters in fantasy. Hobbs argues, among other things, that “I do not feel that gender defines a person any more than height does. Or shoe size. It’s one facet of a character. ... more >