If my friend Elle hadn't mentioned, when she read Tabitha King's novel One on One

earlier this year, that Deanie Gauthier, the heroine of the book, reminded her a bit of Lisbeth Salander from Stieg Larsson's The Girl with the Dragon Tattoo, I might not have paid as much attention to the similarities between the two characters, since there are also great differences.

But since Deanie is one of the most memorable characters I've encountered, the comment stuck in my mind and when I got around to reading The Girl with the Dragon Tattoo, I compared the two heroines and realized that though the two books are quite different — The Girl with the Dragon Tattoo is a Swedish mystery and One on One the story of two Maine high schoolers falling in love — there are some interesting similarities between the two heroines and their situations that make both of them memorable.

The Girl with the Dragon Tattoo is such a bestseller that it needs no introduction, but my review, which includes a description of Lisbeth, can be found here. 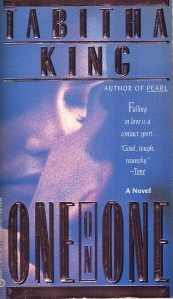 As for One on One, published in 1993 by an author who deserves to be better known (though you might have heard of her husband), it is a book about teenagers written for an adult audience. It's a gritty novel that doesn't shy away from painful realities, and contains explicit sex scenes. Though not part of the romance genre, it's nonetheless very romantic.

Though his parents are divorced, Sam has a loving dad and stepmom, and he is popular. His life is far from perfect: the family isn't rich, and Sam has to work hard after school, helping his mechanic father; he also struggles with dyslexia and with doing the right thing, to the point of remaining a virgin.

The latter is something Deanie is determined to change. If Sam is popular, Deanie is an outsider whose only “friends” are a few school druggies, one of whom she sleeps with in exchange for marijuana and birth control pills. Sex isn't pleasurable to Deanie, but a simple exchange of commodities. It's hard to fault her for this outlook on it, though, since the boyfriend of her neglectful, abusive mother is molesting her and has been for several years.

If Deanie were a different kind of character, her situation might be unbearable to read about, but she is such a scrappy survivor that instead, I end up feeling that she is courageous and heroic.

From her outward appearance, which includes tattoos, piercings, a shaved head and skin “the fragile, easily bruised white of a narcissus petal,” to her inner life, Deanie is a study in contradictions – fierce and prickly yet also vulnerable. She embraces her outsider status rather than tormenting herself over it, projecting unconcern about whether or not she repels others, while secretly feeling she is ugly.

Where Sam is often thoughtful and generous to others, though he still possesses a teenager's insecurities and hormones, Deanie's first instinct is one of survival, and for her, survival includes putting up emotional defenses. “Fuck you very much,” is how she thanks Sam for some of his unasked-for kindnesses, and his response to one of her F bombs is “You wish.”

This isn't just a story of opposites attracting, but of opposites colliding. Sam keeps a highlighted Bible in his glove compartment, while Deanie often carries pot in her bookbag. What brings them together is their shared love of basketball. Sam, whose boys' team won the state championship the previous year, is determined that not only his team, but also the girls', will win the following year. To that end, he needs Deanie to stop her drugging and concentrate on her game.

Deanie wants her team to win the state championship too, but she also has another goal: to deflower the popular Sam, who is so determined to keep himself and her to the straight and narrow. At first this compulsion stems from a desire for power, a way to – in her mind – equalize things between them. But later it develops into something more complex, more seductive and also dangerous, because if Deanie's mother's boyfriend learns what is brewing between Deanie and Sam, everything could blow up in her face.

Sam is a wonderful character-‘strong yet vulnerable; caring, decent, and concerned with doing the right thing and not taking advantage of Deanie, whom he is finally unable to resist. He is one of my favorite romantic characters, but Deanie is perhaps even more memorable.

Though her clothes are inadequate, she doesn't get enough to eat, and her mother even stubs out a cigarette on her arm, Deanie holds on to her prickly pride with unflagging determination. She won't let anyone pity her, even if it means pissing off anyone who might try on a regular basis. She has a spirit and a resilience that make her indelibly memorable.

I won't go into a lengthy description of Lisbeth Salander or The Girl with the Dragon Tattoo because a lot more people have read that book and I recently reviewed it, but Lisbeth reminded me of Deanie because they both share an outsider status (in Lisbeth's case, Asperger's Syndrome is partly the reason for this) which they honor with tattoos and piercings. Both are survivors of childhood sexual abuse but both refuse to be defined by this, both are in the care of horrible guardians at one point in their stories, both are the sexual aggressors in their relationships, both smoke pot and break other laws as well (Deanie shoplifts, Lisbeth is a hacker), and both have vengeful impulses, although Lisbeth takes these a lot further in one satisfying scene.

Lisbeth is the more empowered of the two characters – not only does she rescue herself, she also rescues Blomkvist – but since Deanie is only sixteen, it may not be entirely fair to compare these situations. I recognize that Salander's vigilante-like action is one of the reasons her character has struck a chord with so many readers, but for me her appeal as well as Deanie's lie in their non-conformity, their possession of some traits that some might not consider “feminine,” and their unwillingness to accept victimhood despite having suffered considerable abuse.

When Jane suggested that I write an opinion piece about Deanie and Lisbeth, she suggested “the damaged heroine” as a topic. But to me, these two characters aren't just damaged. They are also heroic in their resilience. Yes, they are not unmarked by what they've suffered. How could they be? But their determination, whether to survive or to get even, is heroic.

Do you have a favorite “damaged survivor” heroine? What about a heroine who embraces her outsider, non-conformist status? Could such a non-conformist, outsider heroine work in the romance genre? Why or why not? If you've read One on One or The Girl with the Dragon Tattoo, did the heroines of those books appeal to your? And if they did, was it despite or because of their “unfeminine” qualities? Can you think of any other heroines like these two?