REVIEW: You Only Love Once by Caroline Linden

My book log shows that the last book I read of yours was What a Gentleman Wants, at the end of 2006. That doesn’t seem right; I was sure I’d read one of your books more recently than that. I suspect I’m confusing you with another author (maybe Carolyn Jewel?), but in any case, starting this book I had the strange feeling that results from not quite knowing what to expect from an author, simply because you can’t remember what you thought of their previous work. Call it book amnesia. It’s not quite the same as never having read an author before – it’s not quite a clean slate, as would be the case with a new author. 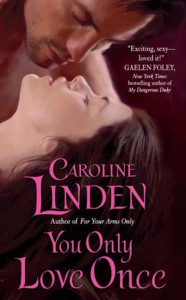 The story opens in France during the revolution. An aristocratic couple are about to be taken away, likely to the guillotione, and the wife’s devoted maid makes ready to spirit away their infant daughter to London and safety. This passage, and later reflections on the French Revolution made me question (not for the first time) the anti-French, anti-revolution bias in historical romance. It’s a bias that has interested me for a while, mostly because I’m not sure what is at the root of it. Is it a general disdain of the French common to…most everyone but the French? Is it based on the weirdly pro-British slant in historical romance (I say weird because it’s usually American authors writing these books)? Is it based on actual disdain for the bloodthirstiness of the revolution? I can get behind the last sentiment, at least. I don’t pretend to be any sort of expert, but certainly, what little I know does not make me sympathetic to the excesses of what was, after all, known as “the terror.” But those excesses were, I believe, at least in part a response to a corrupt and unjust system, one that was guilty of many of its own abuses. You wouldn’t know it by the way the French aristrocrats are portrayed in this book and other historical romances; usually they are virtuous or hapless victims of vicious and greedy zealots.

I suppose that’s neither here nor there. It’s just something I’m curious about.

Anyway…after the opening, the story jumps forward almost 30 years. Our baby is all grown up, goes by the name of Angelique Martand, and works in London as a spy and assassin for a British spymaster named Stafford. Angelique is given a new assignment, one that she’s reluctant to accept – she’s supposed to assist a brash American sea captain, Nate Avery, in locating Jacob Dixon, a British subject who embezzled money in New York and absconded back to his native land. Nate hopes to recover the embezzled funds and return Dixon to America in order to restore the good name of a revolutionary war hero who once saved Nate’s father’s life.

Angelique has a stormy first meeting with Nate – sparks fly, as they are wont to do in this type of story. She doesn’t like that she’ll be saddled with an American yokel, and Nate, though possessed of more sangfroid, is obviously surprised that he’s to receive assistance from a woman. Privately, Stafford gives Angelique an additional assignment: she is to assassinate Dixon before Nate can put him on the ship for America. Stafford doesn’t care if Nate recovers the money or not, but he wants Dixon elemented. Angelique doesn’t know why, but she’s worked for Stafford long enough to trust him and his motives. Still, she doesn’t like killing, and this simply adds another distasteful layer to an unpleasant job.

The story develops in a fairly conventional way: Nate is intrigued by Angelique and she comes to be drawn to him as well in spite of her first impression. He is, of course, more than just a rough American yokel – that was simply a facade he donned for his own convenience. They work together to track Jacob Dixon, and in the process start to fall in love. But Angelique’s secret assignment – as well as her shame over the things she has done in her job – stand in the way of lasting happiness.

There are absolutely  things to like in You Only Love Once – a competent (and sexually experienced) heroine, who mostly manages to carry herself with a certain confidence that is refreshing to see in a romance heroine. The prose is decent, and Nate is a likeable hero – he has a certain laid-back charm that makes him a nice foil for the more intense Angelique. I like the relatively rare romance when the heroine has Issues and the hero doesn’t – usually it’s just the hero who is tortured, or both of them are (and I like those romances too, but one of these is nice for a change).

Somehow, though, the book ended up being less than the sum of its parts for me. I think the problem centers around Angelique – I never really understood her transformation from orphaned French aristocrat to spy and assassin. Little is told about her childhood, except that once she and surrogate mother, Melanie (the maid from the prologue), arrived in England, they were assisted for a while by a relative of Angelique’s. When the relative died, they  suffered some hard times and Angelique had to go to work in a dress shop. It was there that she was recruited to spy, and supposedly she is motivated by a hatred of the chaos and death brought on by revolution. Somehow, I didn’t quite buy it. It’s not that it wasn’t a good reason; it’s just that Angelique’s character never really came alive for me in a way that made me believe she had a true passion for what she was doing. Perhaps that’s in part because by the time we meet her, Angelique has lost that passion and is considering retirement. She’s tired of the deception, and she dreads the killing. I guess I was ambivalent about her ambivalence – while I appreciate a kickass heroine, I think I was also judging her differently than I would’ve a hero in the same profession. Some of her choices were questionable and while she ultimately realized this, it made it harder to respect her. It’s difficult to articulate well without giving away spoilers, but I recognize that part of the problem is my desire for a heroine who is as strong as all of those spy heroes, but ultimately, I end up judging such heroines by different criteria.

Speaking of the strength of Angelique as a heroine, I found myself  wishing the book could have allowed her to be in charge as the investigation went forward. She was the professional, after all. Nate is tough. smart and competent; he was raised on his father’s ships and has spent time on the American frontier. That’s fine. But he also turns out to be unexpectedly good at the sort of thing that is supposed to have been Angelique’s forte – sneaking up on people and coming up with cunning plans (tm Blackadder). To be fair, Nate’s mastery over Angelique is more subtle than I’ve seen in other books featuring intrepid spy heroines (I’m looking at you, Ice Storm), but I still wish we could have seen her really running things, as would be totally reasonable given her professional background. Again, this is probably my issue to a large degree – I appreciate having a different heroine, but I’m no doubt watching her more closely and perhaps judging her more harshly.

Ultimately, You Only Love Once will probably work better for some readers than it did for me – as I’ve said, the ingredients for a very good book were there, but somehow they just didn’t come together for me as a reader. My grade is a B-.