REVIEW: The Late Blossoming of Frankie Green by Laura Kemp 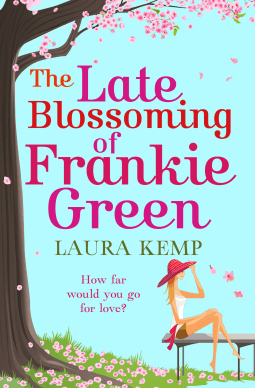 Frankie Green’s happy ever after is put on hold when her childhood sweetheart husband complains things are boring in bed.

When he asks for some space, she sets out to win him back by getting herself a sex education.

Little does she know that her hilarious, tender and embarrassing journey of enlightenment is going to change everything…

A story full of humour, heartache and happiness, of friendship, coming of age and overcoming insecurity.

The blurb for “Frankie Green” sounded intriguing. Would it be a marriage in crisis with a happy reunion? Would Frankie find something new and better in her life? Would she overcome her insecurity? What about the promise of friendship? How was that going to be handled? And I just had to find out about the sex ed. That sounded too much fun to miss.

Though the title is all about Frankie, the book is really about Frankie and her two best friends Em and Lotty. Initially they bonded in school over their unusual names but their friendship has lasted for years and no one can imagine not consulting the others about anything and everything. The overriding theme of the book is self esteem issues and each woman has some. Frankie thought she had it all with a yummy husband, a loving marriage and her salon business. Doctor Who loving geek Em has never had much luck at relationships until the one night she thought she’d finally found a soul mate only to have him scamper in the morning due to his own issues. Lotty has filled her emotional wants with uncontrolled shopping, bed hopping and feels unappreciated at work.

After Jason drops the bomb on Frankie, all she can think of is how she deluded herself into thinking their marriage was fine and what she needs to do to get Jason back. In a drink induced brain storm, she and Em’s older brother Floyd come up with the perfect plan. Frankie wants sex ed lessons and Floyd, a man of some sexual experience, offers to give them to her. Cue ick moment until deeper reflection reminds one that they’ve known each other for yonks, fancied each other a bit at 15 and Floyd is a trained counselor so is used to getting people to open up to him. Plus he’s funny and easy going, willing to help Frankie deal with her crushing embarrassment about the whole thing.

This is a lovely, funny, understated story filled with British (well Welsh) humor. The sex ed scenes are also screamingly hilarious while also treating Frankie gently and with respect. I was half dreading scenes of pratfalls and humiliation but there’s none of that. Just Frankie’s growing confidence in herself brought to full bloom by Floyd’s careful nurturing.

But what about Em and Lotty? They are fully rounded people each with her own chapters and each dealing with personal and work issues familiar to many contemporary women today: unplanned pregnancies, workplace sexual harassment, shopping addiction, family issues including absent parents and broken homes. But mainly self confidence.

Each of them learns, in different ways, things about herself. While Frankie – at least – might have started her journey trying to change for someone else, they all discover inner strengths for themselves. Now how are their new insights going to affect their relationships with the people in their lives because, babes, it’s obvious things aren’t going back to the way they were.

As the story draws to a close, lots of things are realized and settled. Some threads are tied up a bit too neatly for the real world but they are none the less satisfying and the way we might wish things really happened. The epilogue reveals that each woman takes some time to think about what has happened over the past few months and pause to be sure she’s doing the best thing. And in the end, Leonardo di Catprio gives his purring approval to Frankie’s choice in life. Now I must Bing a few of the charming little Welsh touches which were sprinkled through the story including how to pronounce cwtch and what glamping is. B