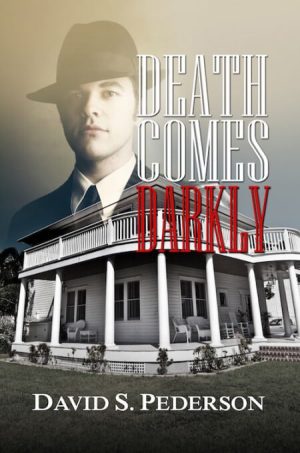 Can a detective and a policeman find love amidst murder? Heath Barrington is an attractive, clever, big city detective, confident, strong, and crazy about police officer Alan Keyes. Down-to-earth, noble, and naïve, Alan struggles with his desires for Heath versus 1940s America and his guilty conscience.

Heath’s skills of deduction and reasoning are put to the test as he and Alan work together to solve the murder of an eccentric millionaire in his mysterious, isolated estate. They search for clues and uncover long buried secrets of the weekend guests while keeping secrets of their own.

It’s up to Heath to solve the mystery and convince Alan that some secrets aren’t worth keeping, and lust can lead to love.

I one-clicked on your book on Amazon because I was interested in the blurb and I try to be a conscientious reviewer, one who introduces new authors and readers to each other. Overall, I do not regret spending ten dollars on this book, but after finishing the story I have to warn Romance readers that there is not much of that here, and *much less* than I thought there would be based on the blurb.

I am perfectly happy to read a gay mystery with romantic elements (which is what this book was as far as I am concerned), but *no,* Alan and Heath do not struggle over their relationship in the story. I am not sure which secrets Heath convinced Alan were not worth keeping, because the story takes place in April 1947 and both guys are very aware that they have to be extremely careful in public. If they aren’t they could be fired from their jobs or even arrested. Moreover, I didn’t see Alan struggling with a guilty conscience – or if he did, I did not notice.

Alan and Heath are a couple who are just at the beginning of their relationship when the book begins. They have known each other for several weeks, but there are no problems they have to overcome where their relationship is concerned. What they are primarily occupied with in this book is the investigation of a murder. It is all very sweet and there are no explicit sexy times – just a few kisses and Heath commenting on Allan’s looks and overall awesomeness, yes, more than once. But as Heath comments – murders tend to kill his romantic aspirations, so there are no sexy times on page or off the page. I am guessing that after they finish with their murder investigation they will engage in sexy times. I was very pleased about this, but readers who want Romance, just beware that there is an underlying love connection between the couple and that’s about it.

So let’s talk about the mystery storyline, which I thought was front and center. The eccentric millionaire Dexter C. Darkly invited Heath to spend the weekend in his estate in Lake Geneva, Wisconcin. Now I don’t know about you, but I would think that something was up if an eccentric millionaire wrote me a letter and issued an invitation because he wanted to thank me for solving the murder of another difficult millionaire, but Heath seems to think that it is fine to accept the invitation. Okay, he was not being a complete idiot, he did a check on Dexter Darkly and found out that he was indeed a well known eccentric ,but still, to think that he would want to issue a personal thanks to a police detective for something that has no relation to him? I do not know. I guess Heath was so proud of his first major case that he decided to ignore the warning bells in his head, but I think Allan had more bells than he did.

The bottom line is that for the story to start Heath needs to get to that place, and whether you find the premise believable will be up to each reader’s perspective. I was able to move with the flow, but it was not super easy. Allan promises to join Heath eventually since he is allowed to bring a guest.

Of course, no thanks for solving the previous murder are forthcoming (in case you hadn’t already realized that). Instead poor Heath has a new murder on his hands. When he comes to the estate he learns that there are four more guests (invited and otherwise) besides him. First we have the guy who loved Mr. Darkly’s favorite son, Nigel. Nigel committed suicide (or not) several years ago and Mr. Darkly ordered this man to stay away from Nigel about a year before he may or may not have committed suicide. Then there is the brother of Mr. Darkly’s first ex-wife who died in a freakish accident (or was it really an accident). Third we have Mr. Darkly’s estranged daughter who was invited to spend the weekend, accompanied by her husband who did not receive an invitation. And finally there is Mr. Darkly’s second ex-wife; she thinks Mr. Darkly majorly screwed her over the money. She was invited by Mr. Darkly because supposedly he wants to make amends. But then Mr. D. ends up dead.

I liked how the investigation was executed – I thought the guys were very thorough and did a good job with asking questions and trying to find out the truth. Apparently Allan is being set up to be Heath’s sidekick and sounding board, with Heath was doing most of the brain work, but I hope Allan will show more smarts in the next book (if there is one; I don’t know but I hope so). Overall I liked them together a lot. Setting the stage for the murder took a very long time – the body isn’t discovered until the middle of the book. I got a little bored getting there – not very bored, but a little bit. I also want to note that while an attempt is certainly made to write ‘whodunit” a la Agatha Christie, it didn’t quite succeed. All the characters did not have equally strong motivations to kill Mr. Darkly. Out of six (including the housekeeper and his wife), only two were real contenders in my mind, and one of them ended up being the murderer. The author tried hard to give motives to each character who could possibly be a suspect, but for me it just did not work as well as it should have. Kudos for the twist though – I did not guess that.
Grade: B-/B