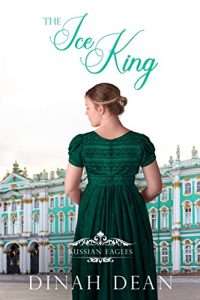 A man with a heart of ice, and the lady with the compassion to forgive his secrets

Orphaned and alone in the world after her uncle’s death, Tanya is overjoyed to be offered four weeks in St. Petersburg society before she must take up a dreary position as a companion. Little did she expect kindness from cold-hearted Prince Nikolai, a cousin of her host. But at her first ball, he dances with her four times!

When a suitor tries to take liberties, it’s Prince Nikolai who comes to save her, fighting for her honor. His behavior is almost possessive, though surely that was impossible. Handsome and loveless Prince Nikolai couldn’t be interested in a penniless lady when his wife had been a renowned beauty.

What shocking secret events froze Prince Nikolai’s heart? And can Tanya thaw it before her time in St. Petersburg runs out?

I’m glad that I finally decided to go ahead and read the rest of the Russian Series having put it off for over a decade given that the OOP paperbacks were hard to find. “The Ice King” takes up the story of a man haunted by a horrible first marriage and a woman who expects nothing from life because she is the perennial “poor relation.” How they find their way to happiness is lovely. But wait! There’s more! A few other people also find a HEA including one who is just mentioned in the book. I’ll say no more in order to avoid spoilers because the ending relationship of this person to Prince Nikolai and Countess Tanya is enough to make me shed happy tears.

Tanya Ivanovna’s parents died when she was young leaving her in the care of a Great Uncle and Aunt. He taught her about architecture and calculating the trajectory of cannon balls while she taught Tanya to sew and do Good Works. After their deaths, Tanya is facing a dreary life of doing nothing but Good Works in a Deadly Dull part of the Empire with nothing else to look forward to when an unknown Uncle and his wife step forward and offer, despite their own lack of funds, to give Tanya a short Season in St. Petersburg. The way Tanya breathes “St Petersburg” as if it’s shorthand for “Heaven” tells how she looks on the offer. So off the family, a basket of kittens, and 2 borzois go.

Uncle Alexei and Aunt Maria Nikolaevna are kindness itself but they weren’t kidding about pinching pennies and with three children of their own, Tanya knows that there will be no magical ending to her fairy tale. But they see that she’s dressed (well, using some yards of fabric left over from the Great Aunt’s dresses from Empress Catherine’s day), treated as family, and introduced to St. Petersburg society. Apparently it’s a “thing” for young debutantes to be taken in hand at social events by presentable young men in the family so the girls won’t become wallflowers and Boris Mikhailovich as well as Vladimir Sergeivitch (both from The Green Gallant) are happy to squire Tanya around and then introduce other young men to her to dance with her. One such person is Prince Nikolai Illyich Volkhov.

If you’ve read “Wheel of Fortune” or “The Green Gallant” then you know about Nikolai’s first marriage to a woman mentally twisted by her mother into an Evil Beyotch. Now a widower after a bottle of sleeping droughts was accidentally left out too close to his paralyzed wife’s bed, Nikolai still remains the Ice King that his wife’s numerous, cruel, and widely known infidelities brought him to. There was more between the two that isn’t known, but which he later tells Tanya about, but suffice it to say that she isn’t mourned by anyone.

When Tanya begins trying to fill the silence, as she dances with Nikolai, by talking about the wrought iron staircase at the Palace where they are that evening, he calmly takes her to look at it more closely in order to find the wheat sheaves with the little mice and birds peeking out. It’s then that Tanya begins to hear about his past. Slowly the two start to interact more, partly by discussing St Petersburg architecture. Fair warning that Dinah Dean uses this as an opportunity to paint a detailed picture of the city. In fact a fair amount of the book is devoted to “showing” readers the city in the time of Emperor Alexander I as well as describing day to day life.

The building of their relationship is actually over a short period of time but I felt as if I got to see them interact and truly get to know each other. There is a definite “found family” feel to these books. We see many of the same characters moving through each other’s lives, as one would expect in high society, but this is done to have them take an actual part in the other books rather than just to plop them there. I loved seeing Boris and Vladimir again as well as young women who had been mentioned as writing to them while those men were at war in Germany and France. Nikolai had at one time been the Colonel of a Regiment and while taking part in a military review, those men show Nikolai how much he still means to them. This also precipitates an opportunity for Nikolai to “show off” to Tanya but of that I’ll say no more beyond it’s very gallant and Boris describes people saying it’s something between Mazeppa’s ride and St George slaying a dragon.

The book includes the mention of serfs and how horrible their conditions could be. Prince Nikolai has freed his serfs but I was startled at the reason why. This might actually be a sticking point for some readers but if it bothers you, keep reading to the end to see how someone close to the situation feels about it. Freeing his serfs makes sense given his past and shows that Nikolai hasn’t always been the “kind” person Tanya initially sees, something that I was glad he makes sure Tanya knows before he asks for her hand in marriage.

And oh, the lead up to making sure she’s fine with his past. Dean cleverly ratchets up his tension as well as that of the reader. When he and we both finally know how Tanya has reacted to what he tells her, I literally shouted something out loud. Going back to look at it, major points for whoever created the old paperback cover and once you’ve read the book, you’ll know why I say that. Dean knows her Russian traditions and the way that the servants address their masters shows a lot about the feelings of the servants. Old family retainers also felt that they could have quite a bit to say about what their masters did. Also the way that everyone deflects to Nikolai’s aunt – a dragon of a society Grand Dame – shows the power that women could wield over their relations.

Watching Nikolai and Tanya barely dare to hope that they might finally have found someone to love them leads to a wonderful, gentle romance. It focuses mainly on them – and a lot on the Palaces, Cathedrals, and other buildings of St Petersburg. So if a slower pace, lots of architecture, and no sex isn’t what you’re looking for, this probably won’t work well for you. If you want to read the scene that Susanna Kearsley says is one of her favorites in the series, here you go. B

Presently the tears began to flow more easily, washing away the bitterness and misery of years, until at last he was still and quiet. The Ice King had thawed, Tanya thought.

Eventually he raised his head and smiled a trifle wanly at her. She dried his eyes and cheeks tenderly with a corner of her silk shawl, and said, “Better now?”

“Everything’s better!” he replied. “The whole world is full of flowers and rainbows, and the sky is raining butterflies and rose-petals!”

Tanya glanced at the window, where the dark night was still full of falling snowflakes, and laughed joyfully as she snuggled against him, and after a while they began to talk quietly and happily about the future, oblivious of passing time; and, as no one had the heart to disturb them, there they remained until long after everyone else in Petersburg had dined and gone about their pleasures at ball, theatre or soirée in the busy flurry of these last few days of the winter Season.

→ Jayne
Previous article: REVIEW: Ms. Match by Jo Leigh
Next Post: Republishing Out of Print Books – It’s Not as Easy as You Think