REVIEW: The Graveyard of the Hesperides by Lindsey Davis 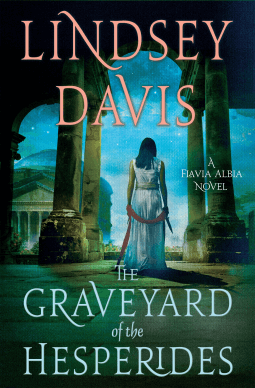 In first century Rome, Flavia Albia, the daughter of Marcus Didius Falco, has taken up her father’s former profession as an informer. On a typical day, it’s small cases—cheating spouses, employees dipping into the till—but this isn’t a typical day. Her beloved, the plebeian Manlius Faustus, has recently moved in and decided that they should get married in a big, showy ceremony as part of beginning a proper domestic life together. Also, his contracting firm has been renovating a rundown dive bar called The Garden of the Hesperides, only to uncover human remains buried in the backyard. There have been rumors for years that the previous owner of the bar, now deceased, killed a bar maid and these are presumably her remains. In the choice between planning a wedding and looking into a crime from long ago, Albia would much rather investigate a possible murder. Or murders, as more and more remains are uncovered, revealing that something truly horrible has been going on at the Hesperides.

As she gets closer to the truth behind the bodies in the backyard, Albia’s investigation has put her in the cross-hairs—which might be the only way she’ll get out of the wedding and away from all her relatives who are desperate to ‘help.’

Here’s another series I’ve been meaning to start, along with meaning to finish the Falco one, for ages. After spotting this new release, I decided to just plunge right in. Flavia Albia is the adopted daughter of Marcus Didius Falco and Helena Justina and was saved by them from the mean streets of Londinium. Now she’s following in her father’s footsteps as a Roman private investigator but with the added fun this time of dodging her younger sisters’ more outlandish wedding planning brainstorms.

The opening third of the book is a catch up of the series complete with long discussions about family which you’d think Tiberius and Albia would already know. Yet it avoids “As you know, Bob” by dint of being snarky fun to read. Still, it’s not solving the murder but then this is the fourth book so we’re past concentrating solely on a mystery case and moving on to the emphasis on characters’ lives now. Along with reeling in her over enthusiastic sisters, it’s an amusing revisit with Falco and Helena (though very much in the background here). Ah, I still remember how they met up in God forsaken Britannia.

Albia asks a lot of questions and deduces that her witnesses are probably lying to her or at least holding back but doesn’t seem to press hard for more. At least she doesn’t resort to vigile style “head slamming into wooden tables” for answers. Of course there are more than people who lie when they are questioned and more mysteries that slowly creep out of hiding, leading Albia deeper into the murkiness of the Ten Traders district and the business at the Hesperides bar. The seamy Roman underbelly doesn’t appear all that differenet from a lot of the unsavory things still occurring today.

And then there’s the wedding looming closer each day. One thing which hasn’t changed from the Falco novels – ghastly relations always show up, especially if there’s food and drink to be had.

Answers to most of Albia’s final list of questions can be puzzled out based on all the tidbits of information she has found along the way. Still there’s so much to wind up that the nice villain exposition comes in handy. I didn’t mind as the character who gives it is fascinating and someone you come to almost respect along the way. The final rendering of justice is dramatic, public and perfect for Romans. As usual, a wealth of detail on life in Flavian Rome is effortlessly conveyed and lapped up by me. Modern wedding planners have nothing to complain about! And the wedding? Truly a Didii affair. B