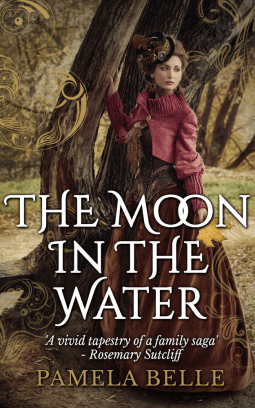 WARNING: Spousal rape (not committed by the hero) occurs. The death of a child occurs during a siege.

When her close family are carried off by the smallpox, the small, ferociously independent Thomazine Heron finds herself an orphan at the age of ten. Not only an orphan, but a considerable heiress. Thomazine is sent to live with her Heron family cousins in the beautiful rose-coloured sprawling home of Goldhayes in Suffolk. She finds herself torn from all that she knows and thrown into a completely different world. However, she soon falls in love with the romantic house and the Heron family who live in it.

There is serious, prudish Simon, loyal Edward, clever Francis, the impetuous young Jamie and their romantic sister, Lucy. When Thomazine finds herself and her fortune betrothed to her cousin Dominic Drakelon while still only a child, she knows there is something she doesn’t quite trust about the sly, handsome boy. And when she realises she is deeply in love with one of the Heron brothers and he with her, can she find a way of releasing herself from the engagement?

But just when she’s starting to settle into her new life the clouds of civil war loom on the horizon, and Thomazine’s whole world – not to mention the whole of England – threatens to change forever. The bloody battles could tear the Heron family, and many others, apart for good.

The Moon in The Water is a page-turning, epic, historical romance from a skilful writer of the period.

Many years ago before ebooks, another of your English Civil War books was recommended to me. I devoured it, managed to find a few of your other out-of-print books but had not read them. “Eventually meaning to pick them up again” turned into years and then, lo and behold, I saw that this book (which I never found in hardback) is now available in digital. Happy days.

This one isn’t just like the meaty historicals of old – it is a meaty historical of old having first been released in the early 1980s and now being reissued by Endeavour Press. Readers need to get comfortable, settle down and prepare for an immersive trip back to the 17th century when roads were muddy bogs – making a trip from Oxfordshire to Suffolk an eight day slog, winter cold required one to wear a fur lined cloak while inside, diseases could almost wipe out a family within days, stolid Suffolk peasants viewed the wilds of Yorkshire as someplace “forrin,” and the clash between King and Parliament was about to rip the country apart.

It is established from early on that Thomazine is unusual for her gender and age in this era in that her father encouraged her to learn, take charge in childhood games, to be independent – in other words, to be the son he didn’t have at the time. She knows this is unusual too. Her life is upended though when both her younger brother and father die within days of each other from smallpox, leaving the motherless girl an heiress orphan whose wardship is taken over by the King and then sold off – a common practice then.

So she leaves her beloved, ramshackle home and journeys to live with cousins. The Heron family is described by an outsider as stubborn, willful and proud. Thomazine as well as her five cousins amply display all three traits many times over the course of the book. And yet they would probably have been thought good landlords and kind to their tenants by the standards of the times. Their servants, and I loved reading the Suffolk dialect, and the estate steward family certainly are loyal – at times unto death.

Almost half the book is about young Thomazine from age ten to seventeen – the years leading up to the beginning of war. But these are important as we see Thomazine’s education – and I was secretly delighted that she excels at sewing as well as the Latin and Greek she agitates to be allowed to study with her male cousins. She also astounds one cousin in particular with her ability to turn cartwheels and climb trees. These are lazy days of happiness while Thomazine comes to feel that the estate and the people there are more her family than her long lost ones were. It’s also when she – unbeknown even to herself – falls in love.

Francis has a mind like quicksilver – inquiring, restless and unable to be satisfied with “same old” or to not question authority, including most disastrously his eldest brother, stolid Simon who can admit no fault. Francis chafes at the restrictions laid on him by father, then Simon and the religious bent of the times. His temperament is too rebellious to allow compromise. In a tiny way he reminds me a bit of Lymond. Francis shows his true love via two Shakespearean sonnets he chooses to recite to his “owd gal” – something that will prove decisive to her later on.

Hints of the conflict to come are voiced in the words of the Irish wife of the steward’s soldier son who saw war in the Lowlands of Europe and who wrongly thought her children would grow up without those fears and horrors in peaceful England. When rumors of the political stalemate between King and Parliament reach Suffolk, the family is almost comically stunned. No, surely this could never proceed to war. Not here. Not in England.

When war finally comes, I couldn’t help but be reminded of the old BBC series “By the Sword Divided.” The action moves closer to Oxford given the Heron support for their King and all do what they can – the men to battle and the women to the defense of Thomazine’s “castle.” Soon the butcher’s bill begins to be paid while family members are left to grieve and mourn. This is also when the wild melodrama really starts and then later kicks up a few notches more. Battles are interspersed with sieges, family loyalty clashes with deadly family rivalry and the three descriptive traits mentioned early flare even higher.

This book will not stand on its own and I do hope that Endeavour Press will quickly reissue the next in the series, “The Chains of Fate.” Also be warned that Thomazine makes some choices that might be as hard for readers to accept as they are for her to make. Will she find her true love? Will she discover “Love is not love which alters it when alteration finds …”? Or will she rue the life altering decision she makes? I’m on tenterhooks to find out. B+