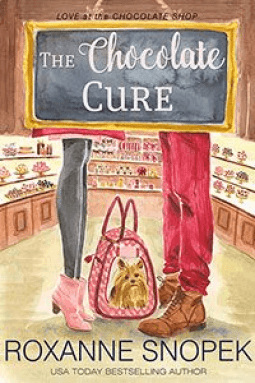 New Year’s resolutions are great. Announcing them in a crowded bar, with a chocolate martini in her hand? Not Maddie Cash’s finest moment. It’s time this new realtor got serious about her life and this time, she means it.

But when hospital volunteering lands her at the bedside of bruised and battered Mick Meyer, who has no knowledge of Maddie’s reputation – and no memory of the kiss he begged from her during that long, pain-filled night, her best-laid plans are put in jeopardy. It’s not just his sweet tooth that’s tempting her.

The hunky bush pilot with the concussion has an old family property to unload. Making this sale could be Maddie’s professional salvation. But when Mick turns on the charm, she’s in danger of forgetting all her best intentions… on chocolate… on meddling… and especially on men.

Ah another romance set in the mythical town of Marietta, Montana. I’d have thought everyone there would be matched by now but I guess more people are moving to it all the time. There’s a quick run down of some past characters though not nearly all of them. But enough for my head to spin slightly. I powered through it. Midway through the story Mick thinks, “This town, it seemed, was full of people living out their happily-ever-afters, determinedly evangelizing the paired-up status to anyone currently outside the club.” Yep, that about covers this series.

Maddie’s got job issues – as in has had a lot of different ones – and needs to improve her sales – as in over zero – to keep the one she has. But she’s conscientious which is good for her clients if bad for her sales quotas. Mick is a bush pilot who loves women but loves his flying more and has never felt like staying a while. I enjoyed their nice bantering and dialog. Zippy-ish or flirty as the case calls for.

There’s an actual legit reason for them to get together – first she’s a volunteer and he’s in the ER and needs watching after his head injury then he’s got a property to sell and she’s a real estate agent.

Wow a book with a head injury that actually sounds like it might be realistic and by that I mean no plot convenient amnesia, no boinkage within 96 hours after the injury and the patient experiences nausea, dizziness, and lancing head pain. I’m impressed. Mick’s male friends and acquaintances give him the usual guy shit for his injuries. Maddie humorously gives him grief as she urges him on in his efforts to exercise without the world tilting on an axis or his feeling he’s going to barf. He can’t recall meeting a woman as generous with her time to try and get him back on his feet.

Despite his past insistence on being a free spirit unencumbered by relationships, Mick is falling hard for Maddie. He also readily admits it to himself from early on. It’s not just her looks that catch him but her exuberance, joie de vivre and the fact that she’s a woman who takes charge – at least of him and his recovery. It also hits him with a shock that she’s as independent as he is, lighting like a butterfly then taking off again. Being on the receiving end of this is humbling and Mick truly wonders if he’s going to get the privilege of getting to know this woman whom he suspects might be The One he’s been waiting for. He’s even come to like her “hairy sock puppet” dog Clementine.

Mick’s transformation from “gotta get back to flying” to “ I have options, I will fly again but maybe Marietta isn’t such a bad place to spend a few months, especially with Maddie” has believable origins. I like how things end. Mick is looking at his options but sure of his feelings for Maddie – that she’s cured his broken self with her sunshine, chocolates and attitude. Right, the chocolate cure. While she’s amazed that breaking her New Year’s resolutions turned out to be the perfect things to do. This is a nice little morsel of goodness. B