REVIEW: The Brightest Star in Paris by Diana Biller 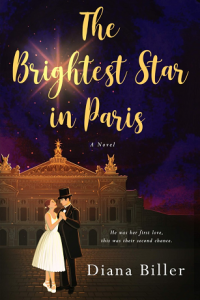 Last year, your debut book, The Widow of Rose House was on my top reads list so I was excited to read your latest, which again features the eccentric Moore family – this time focusing on Benedict – Ben – the second son.

I should have realised of course because the first book contained a ghostly subplot that The Brightest Star in Paris would follow that theme, but I admit, something –  the cover perhaps or its absence of mention in the blurb – had me thinking otherwise. So when the ghost arrived, I was a little surprised. But then I thought, well of course there are ghosts and rolled my eyes at myself.

Like the first book, this book also contains some serious themes  (albeit different ones) – poverty, starvation, addiction, parental death, war, PTSD, but unlike the first book it didn’t have a gothic feel to it. The Widow of Rose House was ominous and threatening when it came to the ghosts and lighter, fun and charming when it came to the romance. The Brightest Star in Paris is mostly melancholy when it comes to the romance and the ghosts are, for the most part, not scary.

In October 1878, Dr. Benedict Moore travels to Paris to attend a conference and in the hopes of finagling a meeting with a renowned French brain anatomist. He will also recruit for his new Brain Institute in New York. And, he hopes to see Amelie St. James again.

12 years earlier, Ben had been in Paris after the American Civil War and was recovering from both physical illness and what is very likely PTSD (although it is of course not named such). His family who accompanied him on that visit, were all terribly worried about him but it is not until he meets a rather outrageous girl in a park one day that he begins to spark back to life and reconnect with the world.

…Benedict assessed his situation. There were three key facts.

One: he didn’t know how to row. There was a level of coordination and balance he had not mastered, and occasionally the rowboat rocked worryingly from side to side.

Two: it was possible—even likely—he was in said rowboat with a madwoman. Who else but a madwoman would commandeer a perfect stranger to row her about a lake, without even verifying whether he could row? They could both drown because of her poor decision-making.

Three: she was even prettier in the sunshine.

He and Amelie fell in love but for reasons which are revealed only late in the book, they separate and she stays in Paris and Ben returns to the US.

I was entirely unaware of the Paris Siege which happened 4 years after Ben left Paris that first time. I knew about the French Revolution and the Occupation in WWII but the Siege had never been part of my education. I found myself reading up a little on it in fact, inspired by the description in the book.

For residents of Monmartre in particular, the Siege was an extremely difficult time with tragic impact on many, including Amelie’s family. Amelie’s mother had been a talented artist and a shining star. She also had many lovers; sometimes she was a mistress, sometimes she was a prostitute. By the time of the Siege, Leonie St. James was dying of syphillis and Amelie was trying to care for her and her younger sister, Honourine. After her mother’s death, when there was no food in Paris for the poor, Amelie herself turned to prostitution, among other things, for survival.

Amelie is now prima ballerina at the Paris Opera. She is known as St. Amie and has, after everything and in spite of her mother, become regarded as a paragon of virtue, revered and adored. For Amelie, the other side of the deal is that she must behave – just so – at all times. This includes her dancing where she is technically correct and skilled but is unable to really bring emotion into her performances. She continues because she must raise Honourine and needs the financial stability of her position to do so. She thinks in 2 more years, she will have enough to retire from ballet. She has a longstanding hip injury which is very painful (and very secret) but is determined to persist for those 2 years so that she and her sister can have a secure future. There is little choice.

Ben offers to help her deal with the ghosts – his brother Sam is something of an expert after all and in return she will arrange the coveted meeting with the reclusive brain anatomist Ben wants to meet (who happens to be someone in Amelie’s sphere). Ben would help for nothing but Amelie wants things to be balanced between them. It is important to her to “pay her own way” and not accept the protection of others. She takes care of herself. That is the lesson for Ben to learn throughout the story actually.

They both love each other. That is never the issue between them. But Amelie wants to dance and stick to her plan and be self-sufficient. She saw what happened to her mother when the protection a man offered was withdrawn. Also, given their respective positions, she wonders how she can bring an equal bargain to Ben.

Amelie’s story is very sad. Almost everything we find out about her as the story goes along is sad or hard or threatening or painful in some way. And just when I thought I had the whole of it, something else would come out that would make it even worse. In some ways, there was something of a Fantine vibe about her. She doesn’t sell her teeth or anything like that and unlike in Les Miserable, Amelie does have a HEA, but still, it was not just the Paris setting (albeit in a different time period) that made me think of the Victor Hugo character.

Ben just wants to love her. His greatest desire is to protect her but Amelie does not want his protection.

Ben’s own history is somewhat melancholy too. There are some flashbacks to when they first met in Paris – moments of light and laughter but also moments which convey how ill, both physically and mentally he was at that time. And since, then, Ben has loved Amelie but has been unable to be with her. So. Like I said – sad.

When the broader Moore family join the story there is humour and light and almost farcical nonsense which was a welcome relief. The Moore family are outrageous (I love them). Perhaps because of how unusual they are as a family I didn’t really blink at some of the things which may have otherwise seemed a little anachronistic (I have no actual idea if they were or not. I decided not to care all that much about it and went along). That said, the tonal shift was a little jarring.

For most of the book, the pacing seemed to me to be fairly modest – not boring but not fast. For the last thirty pages, that changed and I did suffer a little whiplash over it. Those last parts were a but underdeveloped to me. I’d have liked a more explicit comeuppance for a certain character. The ghost story seemed to fizzle out somewhat and there was a rather beneficial coincidence which lacked foreshadowing earlier in the book (or at least, if it was foreshadowed, I missed it completely).

The Brightest Star in Paris is nonetheless beautiful. At times desperately sad and stark but with a loveliness to the prose that somehow, in spite of it all, highlights the lingering joy that prevailed in spite of it all, leading to a hard-won but blissfully contented HEA.

→ Kaetrin
Previous article: Review: The Charm Offensive by Alison Cochrun
Next Post: REVIEW: Garlic and the Vampire by Bree Paulsen