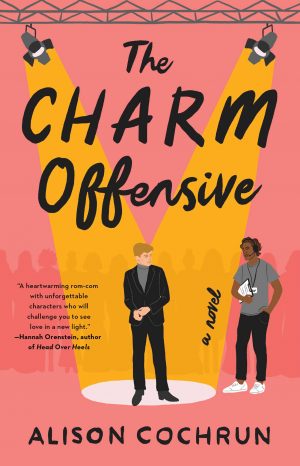 Dev Deshpande has always believed in fairy tales. So it’s no wonder then that he’s spent his career crafting them on the long-running reality dating show Ever After. As the most successful producer in the franchise’s history, Dev always scripts the perfect love story for his contestants, even as his own love life crashes and burns. But then the show casts disgraced tech wunderkind Charlie Winshaw as its star.

Charlie is far from the romantic Prince Charming Ever Afterexpects. He doesn’t believe in true love, and only agreed to the show as a last-ditch effort to rehabilitate his image. In front of the cameras, he’s a stiff, anxious mess with no idea how to date twenty women on national television. Behind the scenes, he’s cold, awkward, and emotionally closed-off.

As Dev fights to get Charlie to connect with the contestants on a whirlwind, worldwide tour, they begin to open up to each other, and Charlie realizes he has better chemistry with Dev than with any of his female co-stars. But even reality TV has a script, and in order to find to happily ever after, they’ll have to reconsider whose love story gets told.

In this witty and heartwarming romantic comedy—reminiscent of Red, White & Royal Blue and One to Watch—an awkward tech wunderkind on a reality dating show goes off-script when sparks fly with his producer.

I did not expect to like this book. A commenter at DA whose tastes run close to mine recommended it and I was in such m/m slump that I figured why not. Why did I not expect to like this book? There are few reality TV shows that I despise as much as I despise “The Bachelor’ and “Bachelorette”. I like reality TV shows, but I like those where people show off their professional skills (baking, designing, whatever). Bachelor, Survivor, Big Brother, whatever are so not my cup of tea, you have no idea.

But more importantly when I see the book so *obviously* based on any reality show, even the one I may like, my first thought is, how about coming up with something more original, you know? A more original setting than just putting the recent popular show in the book. There was also the present tense mentioned in which the book was mostly told, which more often than not is very much not my favorite.

I am glad the writer proved me wrong. The book (how well and how in depth it does so of course every reader determines for themselves) actually examines the show rather than just putting our characters in those settings and let them run wild. It is still a romantic comedy though, not really social commentary (although I would argue it has some of it, just by examining the show and why we as society are so obsessed over it), and Dev and Charlie were absolutely sweethearts and darlings in the best way. The heroes had their issues and Dev really was someone who was absolutely devoted to his work and struggled with issues of professionalism, so that was nice to see, and Charlie also had his fair share of struggles. They both struggle with different mental health issues. I actually thought the writer got the right kind of balance for a light hearted book and still dealt with mental health issues respectfully, but those who experienced it closer may reach a different conclusion.

“Charlie is out of his depth. He doesn’t know how to have a hard conversation with someone he cares about this much—with someone he is terrified of losing. “Your treatment is your choice,” he starts, his throat dry, “but in Munich, things seemed not great.” “I’m okay,” Dev says immediately. “I’m always okay. It’s all good, dude.” “Did you seriously just call me dude?””

I very much believed in their happy ending, but did I believe in the happy ending for the fictional show that the book attempted to show as well? That – not so much.