REVIEW: The Awakening of Poppy Edwards by Marguerite Kaye 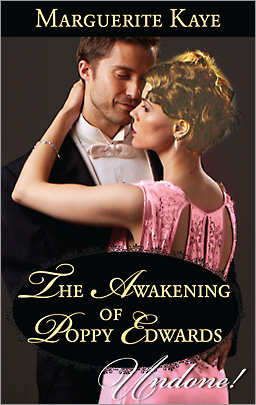 Broadway producer Lewis Cartsdyke has come to Hollywood with a business proposition for starlet Poppy Edwards. But as he’s watching her sing in a downtown club, dressed in a man’s suit that skims her lush curves, a much more wicked proposal comes to mind.

Poppy has fame, wealth and an aversion to love. Lewis offers the kind of passion she craves—delicious, sensual heat without complications. Night after night she abandons herself to sensation, promising she won’t lose her heart the way her sister did. But for Lewis, uncomplicated is no longer enough—and soon he won’t be satisfied until he’s claimed all of Poppy in blissful surrender.

After finishing reading the companion novella to this one,“The Undoing of Daisy Edwards,” I dove straight into this one. Since they’re from the Undone line that wasn’t hard nor did it take long to finish them. Two sisters who’ve sworn not to fall in love – hmmm, what is she going to do differently?

Poppy’s book isn’t initially quite as dark as Daisy’s. Poppy didn’t lose a husband in the killing fields of France nor did Lewis fight there as Dominic had. But in their own ways, they’ve suffered too because of what happened during the Great War. Poppy and Daisy grew up to be so close that when Daisy almost collapsed from grief, Poppy felt it and watched in dismay as her sister shriveled into a shell of who she’d been. When Daisy was no longer able to work in their act, Poppy had to make her own way and chose to leave for Hollywood. Lewis was an ambulance driver and saw things that haunt him still. But he also wrestles with decisions he had to make, things he thinks he might have done wrong and the awful randomness of death.

Both Poppy and Lewis think they’ve found ways to cope with the fallout of the war – for Poppy she’s sworn not to risk the same kind of heartache that wrecked Daisy while Lewis has sworn to make something of the luck of his survival but still hasn’t actually allowed himself to remember and deal with what he lived through. But like Daisy and Dominic, it’s falling for someone and the peace they find from that which will bring them safely home.

I enjoyed the compact, direct, conversational style of the writing. It gives the novella a very immediate “feel.” As Willaful pointed out in Daisy’s novella review, the time and place are delicately hinted at rather being ladled on with a heavy hand. Poppy says how much she enjoys being able to squeeze fresh orange juice then go sit by her pool while she likens something to being lit up with an arc light – very southern Californina/Hollywood premiere-esque. Meanwhile Lewis just knows the bourbon he gets near the night club stage will be awful – due to Prohibition, while if he goes to the bar he’ll quietly get the real stuff.

The sex is hot from the start. Well actually it’s sizzling without having to be described in detail. I have no problems with Poppy being sexually aggressive in a historical as not only is the setting in the flapper 1920s but it’s also in pre-code Hollywood when things were normally wild. But what makes me think these two are truly compatible is that along with the smoking sex, they bond and fall in love in other ways. Both are interested in the technical aspect of making films and the promise on the horizon of talking pictures and Poppy starts to lower her guard when she lets Lewis into the intimate areas of her house – first the kitchen and then only after they’ve admitted their love – into her bedroom. At the point where sex turns into making love.

I was impressed by the fact that both novellas feel complete without seeming rushed. That the emotions are strong and well described and that I finished both feeling good about where the couples are. They make me look forward to the full length book to come. B