REVIEW: The Undoing of Daisy Edwards by Marguerite Kaye 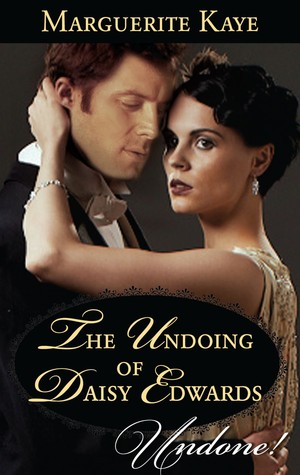 I might not have started this if I’d realized it was part of the Harlequin Historical Undone line, and that would have been my loss. I think of Undones as short, sexy, frivolous stories; this is short and sexy, but far from frivolous.

Five years after the end of World War I, Dominick Harrington is living a half life. His older brother is dead, his mother remarried and moved to America, his younger sister Grace is running wild, and he just struggles to get through each day. When Grace puts him in charge of a beautiful woman who’s stoned out of her mind, Dominick is moved for the first time in years. “There was something — broken, fragile, lost? — in the woman’s face that I recognized.”

Actress Daisy Edwards hoped that a shot of cocaine would make the world brighter on her 30th birthday — a birth date she had shared with her dead husband. Instead she just blacked out, to wake up in a strange bed with a strange man. Her first dreamy sensation of safety turns to terror about what might have happened, until she realizes she’s still fully dressed.

So he hadn’t even tried. I felt curiously insulted, which was strange, because that was the last thing I wanted. Though as I leaned over just the tiniest fraction to take a look at him, I was taken aback to discover my body and my mind didn’t quite agree.

It doesn’t take long for them to act on their newly awakened feelings:

There was a split-second, as her lips touched mine, when I thought This is a mistake, and I almost drew back. And then I didn’t. Her lips were soft, her skin cold. Her hands were icy through my shirt-sleeves, I remember. She kissed as if she wasn’t used to kissing, and I probably did the same, because I wasn’t.

Then something shifted. I don’t know if it was just me. It felt like both of us. We–we found it. Our mouths matched.

There’s very little plot to this short story. It’s all about the setting and the voice — or perhaps I should say voices, since both Dominick and Daisy narrate. Despite how depressed they are, their voices are vivid and alive: both are interesting, mature narrators, who are introspective without seeming like naval gazers. (The short length probably helps.) There are descriptions of clothes and objects that put us in the 1920s, but the setting mostly comes to life though their feelings and conversations, rather than via mention of fads or incongruous jolts of slang; the upheaval and trauma of the war has affected every part of their world and ever fiber of their being, in an almost tangible way. (I was reminded of visiting New York, and seeing the emotional impact of 9/11 everywhere.)

In this atmosphere of loss and upheaval and guilt, it’s hard for Dominick and Daisy to accept feeling emotions around anything else; as if to deny them, both compare their intense longings to addiction:

She was too much, but I hadn’t had enough. In the trenches, there were boys who were addicted to the morphine we were supposed to save for emergencies. In the trenches, it got to be impossible to tell to the difference between what was normal and what was an emergency.

Nonetheless, their passion evolves into an actual relationship, and Dominick begins to realize that life is too short to wish away.

I’m sick and tired of not raising my eyes beyond the horizon of the next twenty-four hours, of not expecting or planing or anticipating. Of not hoping. Of never taking more than a tiny piece of life at a time. Of not allowing myself to want more. I want more, Daisy. I want you.

The book ends with a tentative Happy-For-Now, which seems absolutely right for the characters and the type of story. B