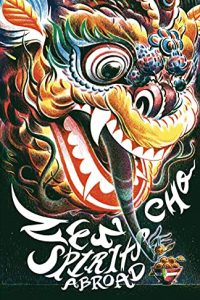 Nineteen sparkling stories that weave between the lands of the living and the lands of the dead. Spirits Abroad is an expanded edition of Zen Cho’s Crawford Award winning debut collection with nine added stories including Hugo Award winner “If at First You Don’t Succeed, Try, Try Again.” A Datin recalls her romance with an orang bunian. A teenage pontianak struggles to balance homework, bossy aunties, first love, and eating people. An earth spirit gets entangled in protracted negotiations with an annoying landlord, and Chang E spins off into outer space, the ultimate metaphor for the Chinese diaspora.

I bought the original version of these short stories years ago after I read “The Terracotta Bride,” which was … wow, yeah I should have read this by now but hey, when I heard that this was being expanded and republished it kind of justified my laziness. I’m sticking with that.

I had read one or two of these stories which are available to read for free online but most were new to me. There are some amazing standouts, some darn good, and one or three that will not be my favorites but that’s to be expected in any collection. Some of the stories reminded me of bits and pieces from “Terracotta Bride” (which is now in this collection) and “Black Water Sister” while two are set centuries after the “Sorcerer” series but touch (very lightly) on a few elements from them (thaumaturges and [mention of lack of] a Sorcerer).

As I read the stories, I was immersed in Malaysian culture both in Malaysia and as a diaspora. What I said in my review of “Black Water Sister” holds true and sure, why not repeat it as there’s not much I can add to this – “The various languages, the mix of cultures, the familial relationships and obligations, and the religions are definitely key parts of the plot(s). The language also took me a little while to get used to as it represents the multilingual residents of Penang. But all of this made me feel I was there.” Four of the stories are set (wholly or partially) in the UK among Malaysian students in boarding school (who confront vengeful British fairies) or Uni (who take on a creepy, slick stalker) or working in medical school clinics (another stalker but a dragon who gets a spirited maiden!).

There are underlying themes present in many of the stories – the roles of and subjugation of women; immigration, assimilation, and feeling “other” (to the moon in one case, to 19th C Britain in another); student stress and anxiety relieved by self harm; familial relationships; friendship; and minorities who feel invisible – and really are.

And the ghosts, beings, and monsters! Wow – so many “new to me” things to now have wandering through my dreams (and nightmares) like imugi, pontianak, hantu, orang bunian, tuyul, orang minyak – that last one is especially creepy. The suave dragon who is determined to win his maiden (rather than just abducting her) is a hoot. There are many Hokkien and Malay words used but I could generally figure out meanings from context and there’s no “use a non-English word and then immediately repeat the English translation.”

Upon comparing the new version with the old, I noticed one story had been removed as well as the warnings that had preceded some stories. Some of the stories are online (thank you) and can be read for free to get an idea if the writing or shorter lengths will work for readers. “If at First You Don’t Succeed,” “The House of Aunts,” “Prudence and the Dragon,” “One-Day Travelcard for Fairyland,” and “Seven Star Drum” are among my favorites but the total reading experience was delightful. B

→ Jayne
Previous article: REVIEW: The Steal by M.J. Rose and C.W. Gortner
Next Post: REVIEW: The Next Pharaoh by Sally Watson