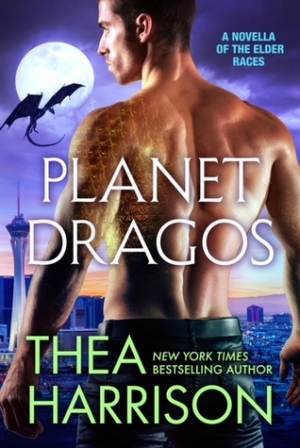 I’ve been a fan of your Elder Races series ever since I read Dragon Bound back in 2011 (2011! Has it really been so long?). [That reminds me: I really need to re-read Dragon Bound] I’ve enjoyed all of the novels and novellas in the series to one degree or another and Dragos and Pia have remained a favourite couple.

Most recently, you’ve written a number of novellas about Pia and Dragos and their growing family. This novella marks the very last of them. While I expect Pia and Dragos will be at least mentioned in the series in future (and will possibly make appearances), they will not be POV characters anymore. It’s the end of an era. I admit I’m a little sad about it, even though I understand why you’ve decided it’s time.

When I last “visited” with Pia and Dragos, their son Liam was off in Scotland at university and Pia was pregnant with their second son, who share’s Pia’s Wyr form and Dragos’s temperament (basically, the exact opposite of Liam). Pia was struggling with the pregnancy; a kind of Wyr Rh factor  – and Pia was on a drug regimen and being closely monitored by doctors as the pregnancy progressed. The medications Pia is taking have left her bloated and listless and she feels totally differently to how she felt when she was pregnant with Liam.

The baby has now reached a point where he would be viable outside the womb and Dragos wants Pia to consent to an induction so that she can no longer be at risk. Pia is determined to carry the child for as long as possible. This is a source of tension for them as they head to Las Vegas for the wedding of Carling and Rune.

Dragos is feeling restless and impatient with the politics of mankind and he is worried about Pia. Pia feels fat and disgusting. It is not a happy Cuelebre family which arrives at the Bellagio. Miffed that Dragos is obviously hiding information from her after he brushes her off when she notices a man on a billboard with a striking resemblance to Dragos, she goes looking for answers herself.

In the process, Pia is kidnapped. Unable to contact Dragos, she has to navigate the end stages of pregnancy without her drug regimen and faces giving birth in a cave without hot water or towels.

Dragos, of course, is beside himself with fear and rage. I have always loved a rescue story and part of that is the risk leading up to the day being save. Dragos being out of his mind with concern gave me all the feels.

The mysterious stranger is Death. I admit some of his interactions with Pia and Dragos lost me a little. I didn’t quite understand what he was doing or why for most of the book. I expect I was supposed to feel that way so as to ramp up the tension but even at the end I wondered if I had picked up the nuance correctly. I’m not very good with some of the subtleties.

There were parts of the book which felt a little rushed, as the Pia/Dragos story wrapped up. Perhaps another 20 or so pages to flesh those things out would have helped me here but perhaps those pages, even though they’d have provided more detail, would have made the story drag?

Sad as I am to not have more Pia/Dragos stories I couldn’t begrudge them a less fraught HEA than they had been living in the prior two or three years they’d been together (in series time). I wondered whether the bit with Rune near the end was entirely consistent with earlier books but maybe the answer is simply that the landscape had changed.

As to why the novella is called Planet Dragos?

Men might be from Mars, Pia said, and women could possibly be from Venus, but Dragos is a planet all on his own. Just look how everyone revolves around him. On Planet Dragos everything goes the way he arranges it—unless you decide to cross him, and God help you then, because he doesn’t know how to back down, and he doesn’t ever, ever let up.

I have always loved how Dragos doesn’t give up and he has to draw on that tenacity as he fights to save Pia and his family. Planet Dragos does not work as a stand alone story; there is too much readers import into the characterisations from the history of the series but for fans like me, it was a lot of fun and I’m glad I had a chance to “say goodbye” and wave them off into their Elder Races sunset.