I went back and forth with Jane as to whether to write a review of Dragon Bound. Jane had written a bit about it already for the contest and it is one of her May Recommended Reads, but I felt that the book deserved a second look, so here I am. Be forewarned: I loved it, blew through it in a matter of hours and will probably sound ridiculous writing about it. Apologies in advance. I will do my utmost to avoid spoilers. 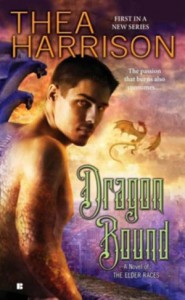 Is anyone stupid enough to steal from a Dragon? One would think not. But half-human/half-wyr Pia Giovanni is blackmailed into taking something from Dragos Cuelebre’s hoard to save Keith, her despicable ex-boyfriend. Pia has managed to keep a low profile her entire life, remaining off the radar of all the Elder Races. She knows Keith’s blackmail has exposed her to some srsly baad dudes and the final straw is her thievery (meaning now the “gud” dudes will be after her too), but Pia isn’t TSTL. While she can’t stop herself from trying to save the scum that coerced her into her new criminal career, she figures out a way to protect herself from letting Keith give away all of her secrets. Beyond this, though, Pia is slightly stymied as to how to escape and leans on friends to help her get out of New York undetected.

Dragos Cuelebre is an ancient wyr, once revered as the ruler of all of wyrkind. Of course, Pia’s theft is discovered by Dragos immediately, and rather than simply being enraged (make no mistake though, he’s royally pissed), he’s intrigued that someone would cross him and think to get away with it. Throwing off his ennui, Dragos tracks Pia down quickly and their initial meet-and-greet is heart pounding and hot. The sexual tension is immediate, and from moment of their meeting the sexual undercurrent is non-stop and gets to those high voltage levels at opportune moments. The chain of events that Pia’s theft sets into motion is riveting, pitting the Wyr against the Dark Fae with Pia and Dragos right in the middle of the action.

Pia is a self-sufficient, self-possessed survivor, having been taught those qualities by her mother. Her hiccup with trusting Keith came at a moment of loneliness after the death of her mother, and trusting Dragos doesn’t happen immediately because he’s Alpha wyr. As a result of her lack of dependence on others, Pia uses her brain to think through things before springing into action and the reader gets to experience her process with her, making her very accessible.

Dragos is a self-sufficient force of nature, being the strongest and most ancient of wyrkind. He has a certain lack of humanity and a definite sense of entitlement; wouldn’t you if you were strong like Dragon? Of course, being the strongest, the oldest, and the best can kinda end up being…boring. Dragos’ fascination with Pia and his need to discover the type of Wyr she is deepens the connection between them as the romance moves in concert with the story. While Pia is only one person, she is hundreds of years younger than Dragos, making their shared experiences new for both of them. There were times I felt that Dragos came across as a bit robotic, maybe due to his erstwhile lack of humanity.

Through the course of the book, Dragos and Pia manage to go to various places around the country as well as to the dimension of the Elder Races. Miss Harrison said this:

One valuable thing I learned from [working with her friend] was how to sketch just enough to paint a picture for someone, leave the rest up to them and move on with the story.

The worldbuilding here does exactly as she says. The reader is provided with the bare essentials to allow his or her imagination to take them to Dragon Bound’s alternate reality without major caveats being forced into mind. I want to go back to this alternate reality again; there was enough Manhattan to make me believe that this reality could easily exist.

There is no lack of secondary characters in the book. While Dragos may emotionally feel like an island, he is no dummy when it comes to business or security. That he realizes that many of the people that work for him both respect and love him as well is another facet of his personality that emerges from the rough. The book has a massive amount of fodder for sequels, but I honestly enjoyed meeting and hanging with all of the other wyr and Fae personalities and didn’t feel that the interactions were forced with neon “Sequel Bait” signs flashing overhead.

The book is on my keeper shelf with an easy A- and I am waiting with baited breath for Storm’s Heart.