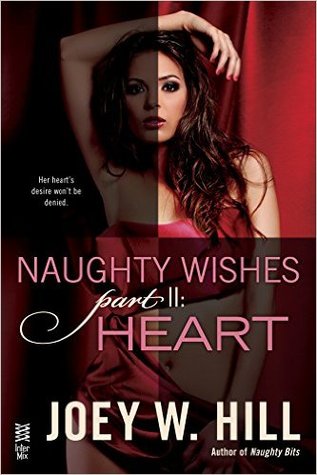 The Naughty Wishes serial continues with part two, “Heart”. While there is a useful recap of the first part of this serial, I don’t advise starting here. (My review of part one, Naughty Wishes: Body is here.)  In that story, Sam and Geoff “broke the seal” (so to speak) and began having sex, while their housemate, Chris, was away working.

*Spoilers for part one*

“Body” ended when Chris returned from his trip, only to walk in on Sam and Geoff having sex in the shower. He’s hurt and angry. While both make it clear to him that it is intended that he join in their sexual relationship in any capacity he feels comfortable with (ie with Sam only or with Geoff as well), he is nevertheless upset that they Geoff didn’t wait until Chris was around before any sex was had with Sam.

“Heart” is also told only from Sam’s POV. She is saddened by Chris’s hurt and anger and wants to fix it. Geoff goes all Dom-y and orders her to leave things alone. In this case, he is right. Chris needs some time and space to consider things and Sam interfering in that will only prolong the process. Chris is a thinker. He’s deep like the ocean. But, unlike the ocean, he doesn’t move quickly. He likes to cogitate on things and get them sorted out in his own head before making any moves.

As was made clear in “Body”, Chris is the wildcard in the Geoff/Sam/Chris deck. Sam doesn’t get a “Dom vibe” from Chris and Geoff doesn’t get a clear “sub vibe” (my paraphrases by the way) from him either. Neither Sam or Geoff is sure if Chris will want to participate in the BDSM they enjoy together and similarly, they are also unsure as to whether Chris will want to become sexually involved with Geoff, except for tangentially, insomuch as there might be some inadvertent contact when both are boning* Sam. (*in a loving way). Both Sam and Geoff have a sense that Chris is attracted to Geoff but the unknown is whether he will be prepared to give into it.

Sam will be satisfied if she is the only filling in the sexual sandwich but she thinks they will all be much happier if everybody admits their sexual attraction to each other and acts on it. She thinks that way lies Nirvana. And, in context, it makes sense.

However, this book is about Chris making his move on Sam alone. Because fair is fair and, I’m sure because of plot demands, Geoff leaves Chris to have some alone time with Sam; for them to make their own sexual connection. While Chris isn’t the Dom Geoff is, Sam is surprised to find that he does have some latent Dom capacity/interest and, given his job, he’s very good with his hands. Bondage is something which comes pretty naturally to him actually.

There is a scene involving a rope hammock and Sam tied up in it which I admit defeated me from a physics perspective. I just couldn’t quite imagine how it worked without a diagram. I know Sam started off standing up but where her legs ended up after that was a mystery I could not solve. As I mentioned to a friend on Twitter, I do badly in IQ tests where one has to translate shapes and match the same shapes except turned around, so it is possible that the hammock scene will be clear as day to other readers. (I am also bad at physics.)

The dynamic between Sam and Chris, notwithstanding the bondage and light spanking he decides he can get behind (heh), is different to to the one between Sam and Geoff. Their sex is sweeter and more tender, generally speaking. (That’s not to say that Chris can’t be bossy or Geoff can’t be tender – they can – just that Geoff is mostly the “Master” to Sam and defaults to ordering her about in ways she’s very happy with.)

While the three fit together well in their ordinary lives and as friends, each person is different, with strengths and weaknesses which are acknowledged between the group. No-one is “better” than the other. They each have their role within the group and they each relate to one another in their own ways.  That said, it is clear that Geoff is going to always be the Alpha-dog in the sexual triad and that there will be some tension between Chris and he over this from time to time.

While the jury is still out as between Geoff and Chris, Chris and Sam have cemented their bond by the time the novella ends. There is no cliffhanger in “Heart” but of course, the story is not yet complete.

I enjoyed both parts one and two about equally and found them to be satisfyingly read together. I give “Heart” a B.