REVIEW: Marco and the Devil’s Bargain by Carla Kelly 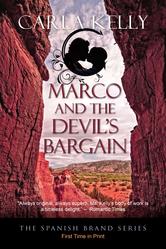 The year is 1782. Marco Mondragón, brand inspector in Spanish New Mexico, and his wife Paloma Vega have settled happily into married life on the Double Cross. And yet Paloma is convinced their joy will not be complete until she has a child. She longs to give her husband a baby to soothe his grief over the death from cholera of his first wife and twin sons.

Marco’s land grant stands at the edge of the most dangerous region in the Southwest: Comanchería. Both Paloma and Marco have suffered at the hands of the fierce Comanche, losing beloved family members in raids. Despite their fear and mistrust of the Comanche, one lives among them. Paloma rescued Toshua from slavery and near death. As much as she respects the man now, Paloma wishes he would return to the Staked Plains, Comanche stronghold to the east in Texas. No one knows why Toshua remains at the Double Cross. Is it because his own tribe shunned him, or is he genuinely attached to its owners?

Now a new enemy threatens the Mondragóns’ domestic bliss: the Dark Wind—la viruela, smallpox—barreling down on the defenseless royal colony from Comanchería. A mysterious and arrogant English physician named Anthony Gill offers their one hope at salvation … but only if Marco agrees to his Devil’s Bargain.

Several past incidents of Comanche atrocities against settlers are described.

Of course I knew I’d have to read this next installment in the Spanish Brand series if only to find out how Paloma and Marco were doing, along with their household, their yellow dog, the Comanche who lives with them, oh heck the whole darn crew from the first book. Given that they live on the frontier of both New Mexico and the Comancheria, anything could happen and usually does.

Marco and Paloma are happily settled into marriage with only one blight on their bliss – the fact that Paloma still isn’t pregnant. Unfortunately this becomes a thing that her awful cousin – who oppressed Paloma the whole time orphaned Paloma lived with her relatives – can taunt her with. Still, I’m enjoying watching their marriage flourish and grow stronger. They have established a rhythm, a trust of each other, that allows them to know what the other is thinking and likely to do. And despite their inherent Spanish dignity and reserve, they often give into publicly showing their love through little touches and quick kisses.

Paloma still isn’t totally on board with trusting Toshua even though he’s lived with the Mondragons for over a year. Her immediate family was slaughtered by Comanches and from her hiding place she watched her mother die slowly at their hands so it’s understandable that she still has her moments of unease around Toshua. Marco has lived his whole life in this area of New Mexico which is situated near the Comancheria and, like all Spanish settlers there, has feared Comanche raids.

But there’s something else almost as bad, if not worse, headed their way – smallpox. Marco has been inoculated but his beloved Paloma has not which is how a nasty piece of work twists Marco into the titular bargain. Only to save his wife and household will Marco agree to deliberately head onto the Llano Estacado. The home of the Comanche.

And this is where I have a bit of a problem with how the book plays out. The only thing that will get Marco to agree to head onto the Staked Plains and contact the Comanche is the threat to his beloved Paloma. The terror the Mondragons feel at the thought of their journey is palpable. Marco even makes out his will in case neither of them survive. Yet it doesn’t take long before Paloma appears to do a 180 on her thinking about the Indian tribe. Before much longer even Marco is settling into life in the Palo Duro Canyon.

I realize that Paloma is still the good hearted woman she was portrayed as in book one but for her to suddenly change her mind about the Comanches and throw herself into helping them seemingly outside of furthering the purpose of the whole trip, elevates her to almost sainthood since for most settlers the only good Comanche is a dead one. Still Paloma is her name and she lives up to its symbolism.

During their stay with the Comanche, the Kwahadi are portrayed sensitively and with respect. It doesn’t take long before they’re acting almost as kindly and compassionately as anyone in your regencies. I’m also thinking WTF? True Marco is going out to hunt and Paloma is helping care for an orphaned infant all while they work to get the band inoculated but the book makes the Indians seem like Sainted Salt of the Earth people at times. When they travel to the larger band and are greeted with wary suspicion, it seemed more realistic to me.

A final twist in a certain character was a bit of a surprise yet the signs were sort of there all along. The story ends with a happy change of fortune for Marco and Paloma which tickled me even as it sprung from a grisly event. I hope that the series will be continued as there are a few loose ends left unfinished which I would like to see concluded. B