REVIEW: Brandon Mills versus the V-Card by Lisa Henry and J.A.Rock 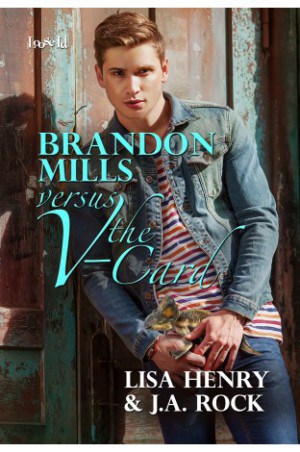 Smart, shy Prescott sophomore Brandon Mills is working hard to overcome his troubled past and be normal. With the help of his friends Mark and Deacon, and his brothers at Phi Sigma Kappa, he’s slowly coming out of his shell. But when he accidentally drenches a freshman in orange soda, he faces something he’s not ready for: a boy crushing on him.

Alex Kekoa pledges Phi Sig because it has everything he wants: a house full of nerds who won’t tease him for being smart, a dog, and Brandon Mills. Brandon is just the type of guy Alex needs to help fulfill his college ambition: losing his virginity. Except Alex doesn’t know that Brandon can’t stand to touch or be touched.

When Alex and Brandon are drafted onto the Phi Sig Academic Challenge team, their mutual attraction grows. If there’s anyone who can help Brandon discover it feels good to touch and kiss, maybe it’s klutzy Alex with his cute glasses and his dinosaur obsession. But as the competition–and their relationship–heats up, Alex’s determination not to die a virgin clashes with Brandon’s vow of lifelong celibacy, forcing them to examine what’s truly important to each of them about love.

When I finished this book I had to look at the cover again to make sure it listed the names of the authors correctly. It was a very pleasant surprise; do not get me wrong, but a surprise nonetheless. I knew you had written a couple of books about college students, which I remember as being funny and sweet, but it seemed that it was a long time ago. Unfortunately I have had to skip most of your recent collaborations and solo works despite loving your writing because the subject matter just was not for me.

I am not even sure why I checked this book out. I passed on the first book in this series (?) “Mark Cooper v America” because I did not like how a certain spoiler issue was handled (according to a review I read), but this book caught my eye and I am glad it did.

I actually read the reviews before I purchased the book because I did not plan to review it at DA originally. The reviews said that this book was sweet and funny and different from your regular stuff. And it was true, so true. This book is charming and awkward and funny. I really liked it.

Mark and his Deacon are supporting characters in this one and I really liked how their roles were written. They are there mostly to support Brandon, Mark’s best friend who apparently was not treated very kindly when he tried to pledge Mark’s fraternity last year, and instead he joined Deacon’s because they invited him. However we actually see Mark and Deacon being part of the story rather than singing the “We are happy, oh so happy” song, which I usually do not like. I also felt that their relationship kept developing and growing and I appreciated that. I do not feel a need to go and read their book, but I liked what I saw of them in this one. I liked Mark and Deacon together and I enjoyed that Mark and Brandon’s friendship was actually shown.

(he was abused by his teacher when he was twelve).
Brandon is not sure whether he is gay or not either, but cute and smart freshman Alex Kekoa, who is pledging their fraternity, does not know that. All he knows is that he has had the biggest crush on Brandon since they met. This is not treated as Instant Love at all, it is treated as a crush and I liked that. Brandon does not know what to do with his feelings at first, except he finds himself thinking about Alex more and more. I often groan about how the characters with bad pasts are handled in m/m stories. From the outsider POV I really liked how this story dealt with Brandon’s trauma. I did not feel that the book was trying to manipulate me into liking Brandon more *because* of what happened to him. The narrative showed him to me as a very likeable character whose past may have shaped him, but it did not completely define him.

I always worry when I cringe after reading a story about characters with traumatic past because I worry what it says about me as a person. Have I become desensitized to the sufferings of abuse victims, even if only in fiction? But I came to a firm conclusion – I do not mind reading the story where the guys had problems in the past or present. Rather, I get annoyed when angstometer goes up 110 percent because I feel that I am being manipulated. I do not think that this story did that, but opinions may obviously differ.

The story does not have many sex scenes, which makes complete sense to me, but I thought it showed very well how the characters were growing closer together. It was full of growing intimacy between them and I believed that teenagers would deal with their first crush/love the way Alex and Brandon did. They were also funny, which I always appreciate. Both Brandon and Alex seem to be characters in motion to me. Again, I thought it made complete sense that 17-18-19 year olds are still trying to figure out who they are and their place in the world. They may know a lot about themselves already, but they do not know everything yet. Some may know that they identify as gay or bisexual or lesbian forever, some are only figuring it out now.

“Brandon wondered what he’d been letting show on his face. If his pupils had been dilating and contracting Gollum-style as he warred with himself.
We hates Alex. Alex is a nasssty boy who gives us kisses we don’t want.
No, no. Alex is our friend. Alex has gorgeous lips and an endearing dinosaur crush.
Alex is wicked, tricksy, false!
And so on.
Where the hell had gorgeous lips came from? Brandon had never had thoughts like that about guys.
To be fair, he hadn’t really had them about girls either. Like that girl in geology class- he’d known she was nice looking, but he’d known it in almost a clinical way. He hadn’t thought gorgeous lips or hot tits or I’d like to pound that ass into next week.”

Maybe what I am going to say will sound contradictory to what I wrote before, but I am going to say it anyway. I did not feel that Brandon was cured by the end of the story – by true love or anything else, he was better but he was still in counselling I believe. And I know that I said in one of my past reviews that I am not going to say anything about anal sex being a necessary part of 99 percent of m/m books, unless it really bothers me. Well, it did bother me in this one. I just did not buy that Brandon, who was having problems even touching Alex and letting Alex touch Brandon, would engage in it so quickly (relatively quickly, I think at least few months passed before they did it, but it still felt silly to me). It was a lovely scene in itself – funny and awkward, but as much as I liked it, I also rolled my eyes.