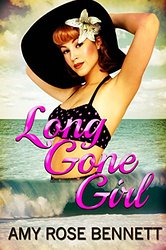 After returning home from the Korean War a widow, former MASH surgical nurse, Ginny Williams, heads to the Jersey Shore for a weekend of much needed R&R. But her plans to do nothing more than relax on the beach go seriously awry when the boy who broke her heart on prom night nine years ago—the now hotter-than-hot ‘fly-boy’ Jett Kelly—shows up on her patch of sand. To make matters worse, Captain Kelly seems to be on a mission to win her trust, and maybe even her heart again. But the last thing Ginny wants is a man—especially one like Jett—in her life. She’s a career nurse, and that’s that. If only he wasn’t so damned charming and attractive…

US air force pilot, Captain Jefferson ‘Jett’ Kelly Junior is blown away to have stumbled across the beautiful yet shy and bookish girl he used to have a huge crush on in high school—especially now that Ginny is all grown up and sexy as hell. Problem is, she’s also not backward in coming forward when letting him know she hasn’t forgiven him for the prom-kiss-gone-wrong incident. Even though Jett knows he’ll have his work cut out for him to get a second chance with her, he’s certainly going to give it his best shot…

Despite Ginny’s determination to keep her head—she’s not the naïve girl she used to be—when Jett starts to unashamedly woo her, she soon realizes that maybe her heart didn’t get the memo…

It’s the 1950s post Korean War era. Well alrighty, here’s a little used time period. I saw blurb, I read, I bought. Overall, but with a few non-US terms (valise, car boot, fancied, motored down the road) and an improbably colored Atlantic Ocean on the Jersey shore, I had fun reading it.

Ginny is a battle hardened surgical nurse and despite her zipping hormones and chagrin at seeing Jett again, on the beach, while wearing a bikini, she neatly puts him in his place. Or at least he thinks she has and admits to himself right away that he acted like a jackass and will have his work cut out for him to win his way into her good graces – that is if he even can. Of course she doesn’t know that he as just as affected by their high school kiss, had a crush on her but lacked the confidence to try for her back then. She might have been reserved in high school but Jett finds he likes the new Ginny – the take no prisoners, confident woman who doesn’t hold back at calling him an asshole or dictating the terms on which he can try to win her approval over the course of one day. It’s too bad for him that just as he’s starting to get back in Ginny’s good graces, sand gets in his Vaseline.

Dodging one bullet after another, Jett plays for his second chance after explaining what went wrong between them all those years ago. Ginny’s right to be skeptical – most women would be as it’s a classic set up of jock unexpectedly trying for the smart girl leading to public humiliation. Good for Ginny that she demands he tell all and that even after she’s still suspicious.

When Ginny is ready to reserve judgment and give Jett the chance to earn his way back from the dog house, I’m thinking she’s a better person than most. She does admit to herself that her raging hormones are blaring Jett’s name. Now if he can only keep from screwing up again. Another bullet adroitly dodged and Jett’s dreams come true when Ginny decides that she wants him more than she mistrusts him. What follows is a hot and heavy work out of the bedsprings and military issue condoms that Jett has all while desperately trying to stay quiet at her boarding house.

I was surprised by Ginny’s initial thoughts the next morning. Instead of a house and white picket fence, she’s thinking “I’m a career woman who doesn’t want a relationship.” She “might want Jett but she sure as hell didn’t need him.” What she doesn’t count on is Jett’s determination. Plan A of Operation Ginny might not have convinced her of his true feelings. But he’s military; he’s not giving in. There’s always Plan B. His Plan B is very honest, direct and might just win him a chance to prove himself. Ginny’s Grandma’s smiling urging to not let this one get away might have swayed Ginny a little too. Since this is a novella, I’m just as happy that it ends on a HFN with definite plans to see what the future might bring them. Well, at least they know the sex will be smoking. B