REVIEW: Lawyer for the Cat by Lee Robinson 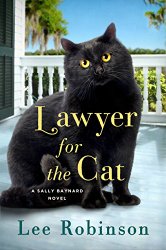 Following her successful representation of Sherman the Schnauzer, Sally Baynard is happy to go back to working with humans. That is until a probate judge asks her to look into the case of a cat who’s the beneficiary of a multi-million dollar trust. Now representing Beatrice, Sally must use her wit, charm and brains to choose between the three potential new caregivers for the lovable feline, whilst dodging the angry and mysterious former owner’s son.

While juggling the demands of the court room, an aging mother and a confusing romantic life, will Sally make the right decision for Beatrice? And, as she delves deeper into the case, will she uncover the truth behind the family’s secrets?

After reading last year’s delightful book “Lawyer for the Dog,” when I saw this one listed at netgalley, I pounced on it. Note the verb. Plus it has a cat on the cover. I am helpless in the face of cat cuteness. Sally Baynard is back, doing her best to juggle five things at once including, this time, a slightly overweight cat who is not at all sure of Sally.

Sally is still dealing with some of the issues from the last book – her mom, her possible romance with a vet she met while she had Sherman the miniature schnauzer and the reverberations from that case. The notoriety of it among the Charleston, SC legal circles is enough to have landed Sally a new pet case – Beatrice a cat with a multimillion dollar trust fund. The retiring Probate Court judge handing the case over to Sally might tell her he knows she’s ferocious in divorce cases but he still manages to buffalo Sally into the job. He does hand out some pertinent advice about the deceased’s son – that he has a screw loose – before dumping the cat files and the cat on Sally.

Of course the story really isn’t about the trust or the cat. It’s about Sally handling the various aspects of her life. She’s still caring for her mother with dementia, her ex husband about whom the Family Court rumor mill still churns out increasingly off base stories of him and her, Tony the vet who wants more than Sally’s ready or able to give in a relationship, her various (human) legal clients who will lie to her despite Sally’s admonitions, and her BFF who needs Sally’s calm in the face of her own family problems.

Sally’s a middle aged woman just trying to get through each day. She’s also tough, conscientious and practical. The woman you want as a friend and the lawyer you want representing you in court. She does the best job she can and wouldn’t think of not going the extra mile.

But she’s not perfect. If she was, she’d be boring. Part of what has me sinking into this story is watching her make mistakes, fail every now, make some relationship choices others might and do question yet keep going. She’s real and interesting and written with empathy.

In the end, Sally sorts through the trust, does her best to adhere to the woman’s wishes and makes sure Beatrice will be loved and cared for. Fair warning that this is more women’s fiction rather than a romance. But I feel there’s more to be told about Sally and her people so maybe next year it will be “Lawyer for the Bird.” B