Warning: mysqli_query(): (22032/3141): Invalid JSON text in argument 1 to function json_contains: "Invalid value." at position 0. in /home/customer/www/dearauthor.com/public_html/wp-includes/class-wpdb.php on line 2187
 REVIEW: To Have and to Hold by Valerie Holmes
April 14, 2016

REVIEW: To Have and to Hold by Valerie Holmes

JayneB Reviews / Book Reviewscommoners / England / Historical / novella / Regency / social unrest / YorkshireComments Off on REVIEW: To Have and to Hold by Valerie Holmes 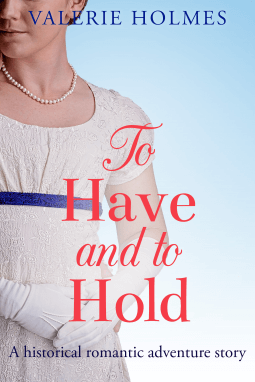 Laura Pennington is the daughter of a wealthy man. Her parents think it is time for her to marry, but they are concerned. Laura likes to take long walks by herself, and doesn’t quite fit in. Laura’s father, Obadiah, thinks local mill owner Daniel Traunt is the perfect husband for Laura, so he suggests marriage to Daniel while working on a business deal. Daniel is not keen, but does not want to lose Pennington’s business. He is not sure what to do, as he has his hands full with disgruntled workers at the local mills. Daniel has always treated his workers well, but that is the exception, not the rule.

As he ponders, a new problem arises, when Jeb, a young boy who works for Daniel’s cousin Roderick, runs away from the mill where he works. Daniel, not wanting to see him captured and beaten by the local louts who enforce the law, tries to track him down. He finds Laura hiding Jeb, who she stumbled upon while out on one of her walks.

Roderick has his henchman Mr Bullman hunting for Jeb as Laura hides him at her father’s boat house. Checking on him one morning, Laura sees the boat is gone, but it’s seeing her father stepping out from the hotel he owns that shocks her the most. For all his efforts to make Laura a lady, it seems Mr. Pennington is not a gentleman.

With the hint of revolution in the air, will Daniel and Laura find a love worth fighting for?

Your name first caught my eye when I read “Augusta’s Charm” earlier this year. What made me interested in reading this book is the fact that neither hero nor heroine are aristocrats. Instead it’s set in the world of Yorkshire textile mills of the early 19th century.

In a similar way to “Augusta,” this book starts fast and quickly moves straight into the action. Events move swiftly but are neatly interlocking, building upon each new addition to the plot to make a believable whole. I would like to have seen some issues that are raised explored a bit more but realize they can’t be settled due to the shorter length. But at least they were given a nod.

Laura is the daughter of a tradesman who has an eye for opportunity and has raised himself and his family in the world, becoming a self-made man. Daniel and his cousin both own and run textile mills but while Roderick sticks with the long hours and low benefits the other mill owners force on their workers, Daniel is a progressive man determined to work with his workers. I love that the 1820 setting uses the actual social unrest, unemployment following the end of the Napoleonic Wars and child labor in mills as part of the plot. Sprinkled through the story are local terms such as gill and beck and cobles.

Laura is one who bristles at “You can’t …” and cheerfully ignores “You shouldn’t …”. She has gumption, a quick mind and a thirst for adventures to fire her blood. Daniel finds Laura brave but, as he bluntly points out, frightfully naïve. He’s a bit highhanded in the way he tries to get across to her all she risks and could have lost by trespassing in the woods but he means well and is viewing things as a 19th century man probably would. Laura, thankfully, has the sense to accept at least some of this.

Daniel is well aware of what Laura can get up to but since he admires her spirit, they’ll rub along well together. Since the danger they’ve been in has already shown Laura and Daniel more about each other than they could learn in a year of local Assembly balls, their quick reassessments in opinion are believable in this novella length story. The book ends with the actual opening of their real courtship rather than professions of true love but, happily, I think everyone knows it’s just the formalities for propriety of an already done deal. B

NOTE – this was previously released under the title “Laura’s Legacy.”